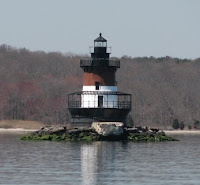 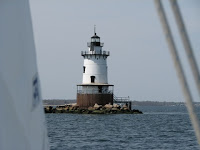 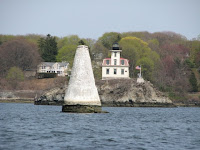 [Kyle] At the end of what was a relatively stress-free work week, I arrived home to spend a few days cruising Narragansett Bay.

After all of the motoring to get me on the flight to work with minutes to spare, our first order of business became buying some diesel for Footprint. Dickerson's Marina in Apponaug, where we were so graciously welcomed (thanks, guys!), does not sell diesel so we went to a couple of different places that we were told did. Here's the thing, though. Rhode Island is still closed, at least as far as boating is concerned. Ninety-five percent of all the boats we have seen are still out of the water and most seem to be in the beginning stages of commissioning for the season. There is a smattering of boats in the water but the generally accepted view is that those people are the real die-hards and they're all a little crazy. There are empty moorings everywhere and all of the waterways are surprisingly quiet. We seemed to get a little more respect from the local salts when they found out we've sailed all the way from Norfolk already. Maryanne keeps giving me a look every time it becomes obvious that we're in the pre-season. I just keep saying, "What!? We beat the crowds. We've got the whole place to ourselves!"

After motoring around and finding a couple of dead ends, Maryanne called around and found a place that would sell us fuel the next day only. With that decided and having had enough of motoring, we unfurled the sails, even though we were in a pretty narrow harbor with docks and mooring balls everywhere. That moment the engine stops and we're just gliding along under sail all sense of impatience or anxiety just stops with it, replaced by a wonderful contentment and serenity. Of course, it's probably not the same for Maryanne as she's the one running around doing everything while I pick our way through the mooring field.

We sailed south out of Greenwich Bay on a beautiful cloudless day, picking up speed as we cleared the lee of the harbor. We spotted a large racing monohull ahead, converging on us from the west and the race was on. Our speeds were close enough that I kept changing my mind as to who was going faster. A gust of wind would come by and we'd pick up speed and pull closer. Then it would get to the other boat and we would fall behind. Eventually, they pulled in ahead of us on the same line to pass under the Jamestown suspension bridge that connects Conanicut Island to the mainland. I used my considerable powers of reasoning to deduce that if they were getting closer, we were going faster. Maryanne brought out something to munch on and we enjoyed nibbling away while watching the other boat's crew running around trimming and adjusting everything, trying to maintain their position in front of us. Just before I would have had the satisfaction of effortlessly gliding past this much bigger boat (bigger boats are technically faster, increasing with the square root of their size), They turned around and headed through the bridge back up the bay. Maryanne and I continued and anchored in Dutch harbor for the night knowing we would have beat them if we'd had another couple of miles to do it. Chickens!

From our anchorage in Dutch harbor we could see both the Jamestown Bridge and the Claiborne Pell Bridge that connects Conanicut Island with Newport on the other side of the island to the East. We also had views of about 3 lighthouses. Rhode Island is lousy with lighthouses. Every one of the many prominent points seems to have one. You can hardly throw a clam shell without hitting one. (Sorry, buddy!). We had a long view of a beautiful sunset by Dutch Island as the near full moon rose on the other side as we toasted the wonderful day.

The next day, the main order of the day was to refuel the boat. We headed for nearby Wickford Cove where the marina Maryanne spoke to the day before was located. Their fuel dock was occupied so we tied up at the free public docks at the end of the fairway and had a look around. It was a beautiful day and lots of people were out enjoying this beautiful village. We got a couple of books from a second hand book store and something to nibble on at a bakery while we strolled around. There was a market called Ryan's that had it's own dock near the public dock that cruisers could use to stop and provision. We went in to pick up a few items. One of the staff apologized for not having much selection and explained that in a couple of hours, the store, which has been there for 122 years, was closing for good. He said that a couple of giant chain stores had opened nearby and there was no way they could compete. It's a shame to a store that has so much character and is such a good resource fall by the wayside. Here's local newspaper article about the close.

Afterwards, we finally were able to load up on diesel ($4.50/gallon) and headed out into the bay for or next night's anchorage in the Kickamuit River on the other side of Bristol. Apart from one cargo ship, we had the whole place to ourselves as we enjoyed perfect sailing conditions as we weaved or way between islands to the anchorage. This place is so pretty and well suited to sailing that they should really think about having races here! The Kickamuit River reminds me of some of the prettier places on the Chesapeake. Its quiet and remote with just a few houses here and there to break things up. I reflexively thought that I should remember this place for weekends, etc. then realized that it may be years before we see it again, what with all of the traveling and all.

The following day we sailed to Potter Cove on Prudence Island, which is only accessible by boat. The entire cove is filled with moorings spaced maybe 100 feet apart. Naturally, since we beat all of the crowds, we were the only boat in the cove. We got a chance to weave in through the moorings to find a spot to anchor in the shallows, all while under sail. Even though it is a very busy maneuver, there is something immensely satisfying about finding a spot, rounding up, dropping the anchor and backing down on it all under sail. We don't need no stinkin' motor!

The next morning, we only had a short sail back to our base in Apponaug so we decided to sail up the Providence River to the City for a look. We got under way under sail, which involved a lot of short tacking and quick maneuvering, and went up the river. We kept busy using all points of sail as we looked at the beautiful lighthouses and homes along the water. The last couple of miles to the downtown area of Providence the river transitions into an industrial port with loading docks, commercial wharves, etc. We figured that since we were already there, we would go as far as we could without losing the mast. Now we've seen it.

This place is so surprisingly empty. We have seen a couple of other local boats but basically we have had the whole state to ourselves. We haven't seen any other boats that were obviously cruising boats (wind generators, tons of gear lashed on deck).[ I flew into Charleston, South Carolina a couple of days later, 600 miles to the South. That's where they all are. We beat the crowds!] It has been really nice having Maryanne retired. When I get home from work, everything is done and the boat's ready to go. We have the whole time together instead of just the two weekend days. Even though I only have a few days off at a time, I feel like I'm on vacation every time I come home. Everybody has been really nice to us and the area is just beautiful, particularly for sailing. One really big surprise is that my adorable wife, who is really bad at accents, is able to do a pretty good Rhode Island one. I think it's because both English and Rhode Island accents aren't so big on pronouncing their rs. (she says she does, but it just comes out ahs.)
Posted by SV-Footprint at 2:37:00 PM