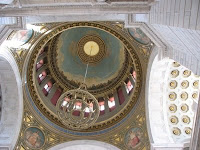 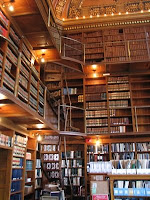 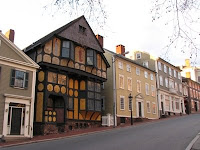 [Maryanne]Since we are docked not far from Providence, and ALSO Kyle ended up with an overnight in downtown Providence during this recent trip - We decided I would join him. We could do some sightseeing, and I could make the most of the downtown hotel room to enjoy a luxurious soak in the bathtub. We had a whole afternoon to explore Providence together.

Luckily for me a single bus took me all the way to the hotel, and Kyle and I arrived about the same time. I had been researching what I might want to see/do, and we managed to fit it all in (Providence is a very small city, I guess in proportion with the size of the state).

We started with the Capitol (The building where the RI state government meets). It is beautiful building built in marble and set on a hill, so you can see it from most parts of Providence (even from our hotel room). Modeled on St Peter's basilica (the Vatican). According to one web site only three other buildings in the world have larger self-supporting marble domes: Saint Peter’s Basilica in the Holy See, The Minnesota state capitol in Saint Paul, and the Taj Mahal in India. The library was my favorite room - the higher up the wall the older the books; beautiful spiral staircases to get to the higher shelves

From there we ventured into Providence's Little Italy - an area called Federal Hill - apparently once a mafia stronghold, but now just about the safest place you can be. They have an interesting (ugly) archway entrance to the area - topped with a pine cone (although it looks like a pineapple). Full of great Italian groceries, bakeries, ice cream, cheese stores and family run Italian restaurants, we picked one and enjoyed!

From there we walked down the river (Providence River), around Brown University (Where Brian from Family Guy studied), down Benefit street (described in one web site as a mile of cobblestone sidewalk with candy colored 18th and 19th century houses on a steep hill overlooking downtown Providence), and returned along the river via the Union Station and back to our hotel.

Providence downtown really is a beautiful place to wonder. The River set as a central feature, with lots of walkways, squares, fountains, historic plaques, etc. In the center of the river is a long line of torches in baskets which flame for holidays and festivals; they weren't lit when we were there but Kyle says they look great when lit.

It was a nice interlude for Kyle from work, and a great reminder that we have started our cruising life; Maryanne can finally spare time in the week to enjoy such pleasures.
Posted by SV-Footprint at 9:33:00 AM

You made me want to visit Providence! OK, it's not like you were advocating a tough sell like Akron, Ohio, but still - I tend to think of Providence as the preferred location for the bigger gay pride rallies, and a stepping off point to Cape Cod and Martha's Vineyard. I had no idea it was so quaint or that its Capitol was so gorgeous! Very glad to hear you both enjoyed your outing so much.

Maryanne, while you're in Providence, you sure you don't want to head over to the Provi Auto Trader office and troubleshoot some missing ads on the Internet?

Ahh Steve.. I work for good food and car rental now! Would love to help, but doubt they will let me in the system now. Hope you are all doing well, as you can see, I'm having a ball.