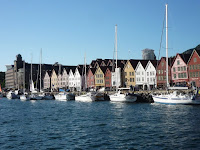 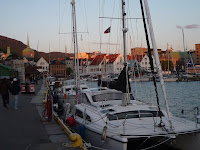 Footprint docked at the wall in Bergen
[Kyle]We arrived into the city center harbour and managed to squeeze in along the quay at a spot just big enough for Footprint that had been rejected by others. We were right along the Bryggen, the old, medieval district. (Bryggen is Norwegian for wharf). We secured everything, answering questions from passersby as we did, and then headed out for our usual – getting to the top of the highest nearby hill for a view.

Instead of the usual routine of hiking up the nearest unimproved trail with Maryanne carrying my cinder block so that I have something to sit on at the top as I enjoy the view, we paid 35 Kroner to take the Fløibanen – the Funicular – to the top of Mount Fløyen. We then had an ice cream from the shop up top and had a nice stroll down to the city center, first through the park, then on winding residential roads with pretty houses that reminded me very much of Lombard St. in San Francisco. 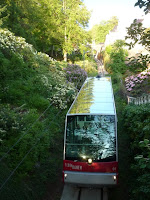 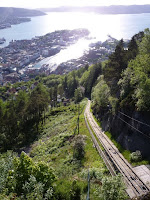 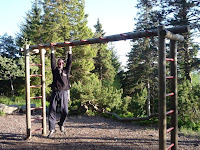 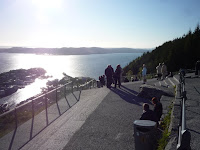 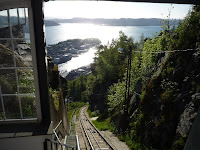 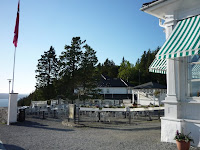 A ride up the hill, to viewpoints, restaurants, fun and games 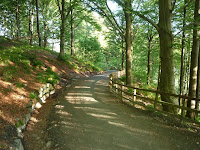 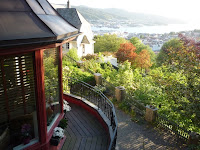 And a very pleasant stroll down, that's more like a "nice walk"!
Maryanne was a completely different person on the walk. Usually, as she’s pulling herself up over a ledge panting, she says things like “oh God …it goes on forever!” And, “I’m startin’ to ‘ate this bloody mountain!” This time, on a downhill stroll on a nice, wide path, she was downright chirpy, saying hi to everything. “Hello, birds! …Hello trees! …Hello flowers! …Hello bits of rubbish!” She was practically skipping! I know there must be some sort of lesson I could learn from this, but, for the life of me, I can’t possibly think of what it must be.

The next morning, we were up bright and early in order to get to the police station to clear out of Norway with Immigration. Like a trip to the Department of Motor Vehicles, the whole thing only took about five minutes, but not until taking a number and waiting behind a hundred other people doing more lengthy things like applying for residency and work permits. We sat forever in a poorly lit hallway staring at the number display, each other and the ceiling tiles until we had every smudge on the floor and walls memorized before our number was finally called and we were released.

With that complete, we decided to do something a bit more interesting and took a very well done guided tour of Bryggen. Bryggen was the original part of town built starting in 1140, and subsequently owned by Hanseatic merchants from Germany who, after the plague had decimated the Bergen population, were brought in to keep commerce moving. They built a series of long, tenement houses, through which goods gradually moved from the sea front offices to the back, passing through various hands, before being sent out. Each long house formed a communal, male only dwelling for workers and managers of a particular absentee owner. 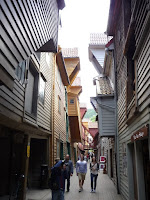 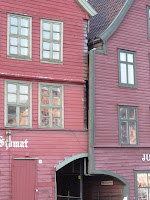 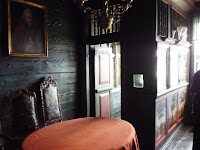 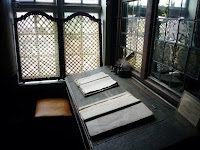 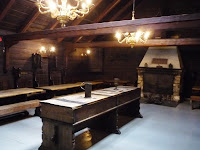 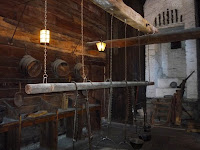 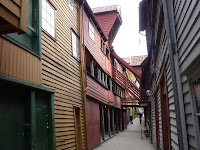 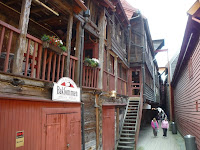 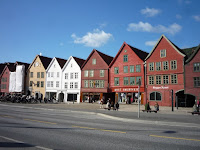 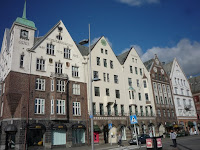 Bryggan inside and out - old original style wooden buildings and newer stone, fire-safer affairs
Over the years, large sections of Bryggen burned down and were rebuilt again. Policies were put in place that restricted cooking and light from the entire building and confined them to a stone cooking and eating hall at the back, making for what must have been terrible, bleak winters living in the main house.

Buildings were also required to be constructed a certain distance apart at ground level in order to create a fire break. Owners and managers quickly got around this by building eaves and awnings so that adjacent buildings practically overlap each other. We noticed overhead sprinklers in every room that we saw, but all of this densely packed wood must still give modern fire marshals nightmares. It’s easy to see how the whole district went up at once.

The current crop of buildings was rebuilt to their original plans after a massive fire in 1704. Since then, subsidence and the explosion of one nearby munitions ship in WWII has caused the buildings to sink and lean heavily on one another, giving them a certain funhouse quality. Our guide insisted on several occasions that the latest subsidence was caused by fresh water intrusion into the original wooden pilings when the Radisson Hotel at the edge of the site was excavated, once fresh water enters the wood it has started to rot, while the salt water intrusion actually helped to preserve the sunken wood. Radisson, they’re the baddies.

At the end of the block, restoration of the foundation of one of the houses is being accomplished by jacking up the entire building about a meter with jacks through-bolted to the walls and then redoing the foundation underneath using traditional materials and methods. It looks like a pretty daunting job.

We went to the local library to use their wifi so that we could download the latest weather file. We found the best (actually, only) window for departure for the passage back to Inverness was later that night. We took our time getting back, making a point of meandering through the parks and streets along the way before grabbing a few hours sleep and setting off for Scotland.

[Maryanne]Despite our very short stay in Bergen, we did manage to walk around much of the city, and get lost enough times to find ourselves away from the main tourist areas. It was exquisite, and despite being the 2nd largest city in Norway, had a lovely small feel (somewhat like Edinburgh). We really enjoyed it, and regretted the weather was pushing us away - we'd have loved to explore the excellent art galleries and museums. Each of the neighborhoods we passed were made up of picture postcard streets, you couldn't help but imagining living there and life being just wonderful.

Being on a boat, and tied up so close to the main tourist scenes, makes us too a tourist attraction. Often people come up to talk to us as we've just arrived somewhere and are (trying to be) focused on securing the boat for an extended stay, but we always try and be friendly and answer questions. The American flag gets us extra attention. I was busy one evening filling water tanks when a friendly drunk bombarded me with questions; I was a bit nervous about just how friendly to be. All the time I was fending off his amorous suggestions, I could just see Kyle in the cabin hiding from view of my new "friend" and laughing at the predicament I'd found myself in... Hmmmm Some hero! 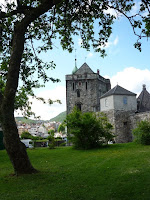 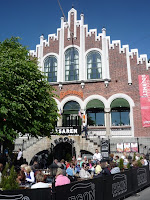 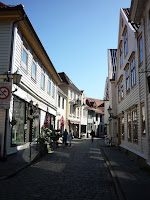 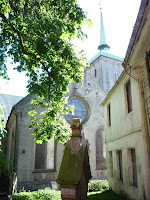 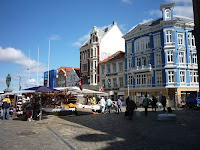 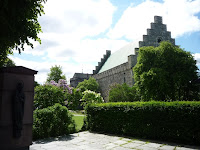 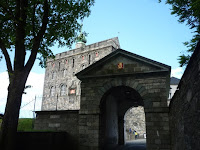 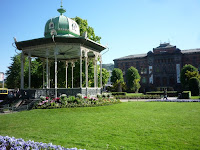 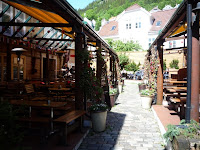 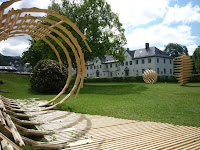 Scenes from Bergen City
Posted by SV-Footprint at 1:46:00 PM

Bergen looks like a place to spend about a week. It must be what Disneyland was patterned after. I love the picture of the two buildings that once were aligned, but no longer. Wow.
Kyle left you with the amorous drunk, heh? Even a good bird would have strutted out and run off the intruder. I'm sure he was having a good laugh.
I wondered how much notoriety you receive because of the distance you've traveled, which the US flag alerts everyone to, and how famous you are. Of course you're famous! Deservedly so.

I hate to think of the deal Maryanne had to strike in order to have Kyle shell out the extra Kroner for that (non-hiking) trip up the mountain - and the ice cream! (Next time a picture of the ice cream, please - that will help lend the story additional credibility.) A beautiful place is Bergen, thank you for the all the photos of what you saw!