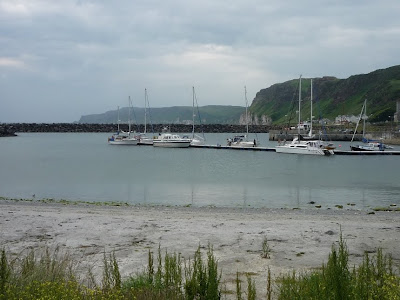 Footprint in Rathlin Island
[Kyle]With a glorious sunrise, we left Scotland under motor on in a flat sea for a bit, then a light wind filled in from the southeast and we were able to hoist the main and unroll the screacher for a fast run across the strait to Northern Ireland.

Soon, we were back in "Green Arizona", with its cliffs and pinnacles towering above the sea. We pulled in at our last stop before crossing to Scotland last year, Rathlin Island. We tucked Footprint in at the shallow end of the dock and Maryanne went to pay the £13.50 fee. She said the guy remembered us from last year.

We had a short walk around to get our legs some use and to re-familiarize ourselves with the place. We hadn’t been ashore for four days by then. It felt good to get out. It’s funny how memories play with time. We hadn’t seen this place for 318 days and yet, walking the familiar roads, it felt like we had only been gone for a couple. The sounds of the birds and the smell of the heather brought it all back as if we had never left.

We had dinner aboard Footprint and treated ourselves to a dessert at the pub, which was marvelously chocolaty. We struck up a conversation with a couple of semi-retired Welshmen who had just arrived on their boat. They gave us some good advice for later on. They were hilarious. They had been sailing together for many years and had the banter of on old couple, finishing each other’s sentences and correcting each other, exchanging playful put-downs and repeating inside jokes in stereo. They had a bunch of time off and were just sailing around without a care in the world. That’s the life, man.
Posted by SV-Footprint at 12:21:00 PM