[Maryanne]We forgot to mention exactly just how remote Finnaboten is... It is a small pocket at the end of the fjord, entered via a narrow pinch in the main fjord. Surrounded by large and steep hills, and with the entrance offset, it appears as a solitary lake in the mountains. We told you it is difficult for larger boats to get in (shallow draft and low power cables) - but we didn't explain that there is also no road. There is not even any mobile phone service; it’s a real get-away-from-it-all kind of place! Everything has to arrive by boat, and the fjord ices up over winter - so then the only way in is by foot over some pretty big peaks or by hovercraft (the one they are designing and building themselves)!

Apart from the outstanding beauty, the next best thing was the welcome we received at Finnabotn; even the Estonian chef took time out to chat with us, and welcome us to visit his home town in Estonia any time, we are embarrassed by the kindnesses offered here.

Our day of forecast rain was welcomed as time to catch up on some relaxation (and rest our weary muscles), and as Kyle mentioned in our previous blog we finished our last evening with a wonderful meal cooked by Alexander the chef, from a beautifully decorated table with a view of Footprint.

Given it's remoteness (and no roads or ferry stop), only very few foreigners get to visit, but apparently Americans form their biggest count! Again (given the remoteness), the residents have to be pretty resourceful people. They keep goats, and own/run several businesses including the guest house, all while re-building their house (after a fire in 2009 destroyed the 1617 farm house). Amazingly they still find time to spend with all their guests, and when there are no guests they relish the quite time together in such a spectacular location.

All Norwegians seem to be very much more in touch with nature than most westerners. It is normal for people to go (often as a family) gathering wild berries, nuts, and mushrooms; and such outings can be for several days with camping as they move from site to site. Everyone seems to be able to fish (including elderly ladies and kids barely able to walk). We were advised that mackerel were an easy catch at Finnabotn; Kyle tried (in the rain), but the mackerel are still there for the kids and elderly to catch. I’m feeling very much like a useless city girl, I need to learn this stuff! 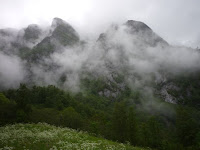 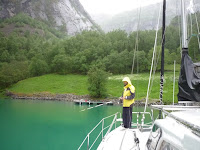 A lazy, rainy day - the rest much appreciated, fishing: not so good!
[Kyle]The morning we left Finnabotn, the rain had finally stopped and a low scud layer of clouds was hanging near the tops of the cliffs, making the place look dark and ominous. The high cliffs meant there wasn’t a breath of wind on the fjord and we were able to cast off with a gentle push against the dock that sent Footprint slowly out into safe water. No fancy maneuvering required.

We knew it wasn’t going to last. Our forecast was for winds in the mid twenties blowing in from the north – perpendicular to Sognefjorden. The high mountains on either side would block a wind from the north, but all of that air has to go somewhere. I was hoping that there would be just enough east in the wind that the path of least resistance would be to run down the fjord toward the west with us. No such luck. We motored out of Finnafjorden and ran smack into a 25 knot headwind and steep two-foot chop. The chop was just the right size for us to come off of a wave and slam to a stop on the face of the next one. It was a miserable way to spend the day. Half a dozen times in a wide spot, the wind would come just enough from the side that we thought it would be worth putting some sail up. We’d go through the whole routine, have ten minutes of good sailing, and then the wind would shift dead ahead or die or both.

In the end we gave up and resigned ourselves to a day of misery like monkeys in the rain. I found myself counting the seconds until we would round a bend and have a chance to turn another 15 degrees off the wind.

After what seemed like an eternity, we finally turned south out of the Sognefjord and had the wind at our backs. The speed shot up, the slamming stopped and suddenly it was a nice day to be out on a boat again apart from being a little windy and cold. We left the towering cliffs of the fjord behind and entered protected channels bounded by islets of granite. This part of Norway looks a lot like the Maine coast.

I had originally planned to stop at Leirvik, our first stop in Norway, on the way to Bergen but decided to use the north wind to our advantage and get in a little extra distance, thus making our next day more reasonable. We decided to pull in at Skjerjehamn . When we made landfall in Norway, we found ourselves sailing neck and neck with a Norwegian boat that pulled in there to keep from being passed. For the way south, it seemed nice and was at about the right distance.

We pulled into the marina and immediately found ourselves trapped. The wind was so high from astern that we had to use a LOT of power to stop and back our way away from the rocks at the other end and up to the dock. It was very tense but we did our best to appear nonchalant for the crowd of people watching our approach. It turns out there was a large wedding in progress as well as a corporate barbecue so we had lots of witnesses.

We managed to get Footprint going the right way and gently nudged her up into a corner under the protection of the tall ship Svanhind looking as if we were real sailors. Whew.

Skjerjahamn has been completely renovated by a former fisherman to beautiful condition. The craftsmanship was truly remarkable. The office was done up like an old General Store, the showers were the cleanest I’ve seen and came with a four inch thick solid wood door that felt like it belonged on a safe. The banquet and guest facilities are all done in marvelous smelling cedar and they’ve even got cedar-heated hot tubs, which were being used by the wedding party but which still smelled good nonetheless. 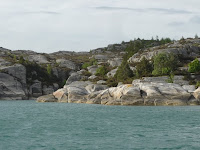 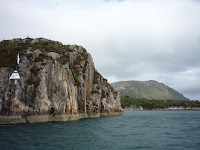 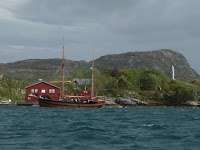 Scenes from the journey to, and arriving at Skjerjehamn
Statue of King Olaf just off to the right
Skjerjemamn is also home to an enormous statue of the previous King, Olaf. The story goes that it had been planned to be placed in Oslo, but the deciding committee couldn’t agree on what to do with it. Skjerjehamn then stepped in and managed to convince the artist that they had a location worthy of his work, so here King Olaf now stands.
Posted by SV-Footprint at 5:43:00 PM

I'm thinking Kyle is secretly shooing those fish away. I really think he'd have a very hard time if he caught one. He does not strike me as much of a killing machine ;-)

Gorgeous, gorgeous, gorgeous. I've been asked to forward your posts to most of the neighborhood in AZ and they comment to me all the time in gasps and high praise, though it appears they don't know how or won't leave direct comments. So, from all of them--BRAVO!

I've fallen in love with Finland too, Maryanne, thanks to your picture-postcard-perfect photography (you even managed to capture the quiet beauty of the rainy days) and Kyle's descriptive, "up close and personal" narratives that make your travels really come alive.

I'm curious though, why did you say your climb in Finnabotn would probably be your last in the country? Have your muscles given you an ultimatum? ;-) Or are you returning to the UK? Going on to Denmark? Sweden? What's next on the itinerary?

Wherever you go, happy sails!

Hi Karen.. Yes, we've left Norway now (not Finland), and are just back in Scotland after what seemed like a very long passage (with a detour due to weather to Fair Isle again) - all part of the fun!

I know - how embarrassing, duh. I realized the mistake after I posted. (Had been looking at a map of the Scandinavian area in another window....)

Glad to hear you made it back OK even though it took longer than planned. (Isn't that always the case when you're anxious to get somewhere?)

Happy sails to the next port of call, wherever that may be!

Hi kids!! checking your travels from time to time and enjoying every minute of it! Your pics capture the incredible beauty of it all. So wonderful is your travelogue that you could market a book, with a little editing, in your spare time, LOL!! Selling my house here in St. Martin and building a little one with a bigger garden in Anguilla on my friend's land. Yes, THAT friend! Love and safe passage to you both on your life journey.