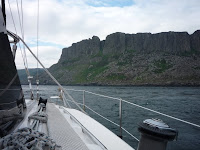 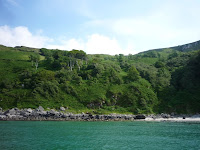 Fair Head and Murlough Bay
[Kyle]Following our afternoon on Rathlin Island, we went somewhere else we had been before: Murlough Bay. We did this simply because we liked it so much the last time and were eager to return. None of our cruising guides even gives the place a mention. The only indication that it is an anchorage at all is the little magenta anchor symbol on the chart. Our Lonely Planet Guide to Ireland has a paragraph or so about how it was once the site of a small chalk quarry, the only evidence of which is a ruined limekiln near the beach.

Murlough Bay is not so much a bay as a slight indentation along the rocky coast. Sailing by, even quite close, it looks completely untenable as an anchorage, with waves crashing onto the rocks on either side. Approaching closer to the crook of the bay, there is a tiny gap in the rocks of sandy beach that is about 50 meters long – not long enough for a stroll, but probably just the right size for a game of fetch with an energetic puppy. The slight dent in the coast and the rocks on either side of the beach disrupt the currents that race by, making for an uncharacteristically calm spot in a sea of pyramid shaped waves and swirling eddies caused by the fierce currents rushing by. All that is left is a slow, rock-you-to-sleep swell that gives the nice feeling of being on a boat without feeling like we’re underway in a rough sea.

Right up at the point where we start feeling nervous about being so close to the beach and the adjacent rocks, we dropped our spade anchor in fine sand about three meters below the surface, which it holds onto like it were a ring embedded in bedrock. We were surrounded by a huge coliseum of green hills. The cliffs of Fair Head lie just off in the near distance to the north. We were close enough to the beach to hear the surf as it landed.

The trip from Rathlin was so short that, aided by a current of up to five knots, we arrived in just over an hour. We were there by 10am, giving us the luxury of a day off. I know, I know, a day off from what? You know, from sailing and navigating, like. That can be hard. We had the whole afternoon to just loaf. The thing I really needed from all of the early starts of late was a good long nap. Without any stress about having to get up to go somewhere or do anything, I had one of the best afternoon naps in recent memory. At one point, I woke up and decided I was so content napping, I went right back to sleep. I don’t usually do that. I’ll wake up a little and then start thinking about all of the things I have to do or how I have to get up soon anyway and then it’s all over – no more sleep.

I woke up actually feeling refreshed and Maryanne and I spent the rest of the day reading and watching the world go by. To one side of the beach is a single holiday cottage that looks like it would be a great place to rent for a week or so. The guests essentially have the entire bay to themselves – except, of course for the American boat anchored off the beach. This place is definitely off the beaten path and I’m pretty sure no one has anchored here since the last American Boat the previous August. I hope we’re adding to the ambiance, although I realize Footprint is a plastic catamaran instead of a classic wooden ketch, but maybe it’s all the same to the people on the beach.

We got to see what looked like a group of new guests arriving. Three cars pulled up. The people went inside for a few minutes and then there was a huge flurry of exploration as they checked out their new surroundings. After a while, it petered out. A couple of people sat on the beach talking. A couple of others fished. Some kids went playing in the trees. After a long while, they all filtered back to the house for what I imagine was a nice meal and a good catching up.

In the evening around dinner time, I went out on deck, cast a lure into the weeds for about five minutes and caught a Pollock. It must’ve looked to the people on the beach like I do this every day as part of our routine, “Oh, it’s dinnertime. I’ll go catch a fish”. Ha! That was the first fish we’ve hooked since the Dorado on the passage from Guadeloupe to Antigua a year and a half ago and the first one we’ve actually landed since Boston six months before that. The count is now at four. Four fish, even three-fingers Tony from New Jersey can count ‘em on one hand.

Tell the truth--how big was this fish, really? Are we talking minnow here?