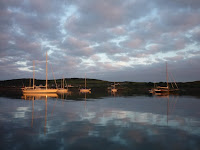 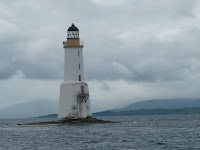 More sailing
[Kyle]We woke to more low clouds interspersed with heavy rain. Avery time we would manage to get up the motivation to get up and at ‘em, rain would start pelting the cabin top. Yuck!

We had light headwinds forecast. I had done a couple of calculations and determined we didn’t have enough fuel to get to the next fuel stop so we would have to sail as far as possible. If we could get through the whole day, we would then have enough range to motor the rest of the way should it become necessary.

We got the sails up as soon as we cleared the sound, and I was pleased to find the wind angle was a little better than a direct headwind and it was stronger, so we were making decent speed. We would be able to get there with a series of very long tacks only about ten degrees off our course, and a few short tacks to get us at that angle.

Of course, it didn’t last. The wind shifted and we tacked west toward the Isle of Scarba. We tacked again to the south, crossing the Gulf of Corryvreckan – the 1 km wide channel between the northern end of Jura and the Isle of Scarba -at maximum ebb. We would not have dared enter the straight at this state of tide, or probably any other, to be honest, but crossing a fair distance from the entrance seemed okay.

The Corryvreckan whirlpool is one of the three most notorious in the world, the other two are the Maelstrom in Norway’s Lofoten Islands and The Old Sow in New Brunswick, Canada. It is caused by the funnel shape of the Sound of Jura, which causes the tide to “pile up” significantly more in the sound than out, making for a large elevation difference. Water can flow through the Gulf of Corryvreckan at up to 8 knots. Beneath the water a pinnacle rises from the 200m seabed to just 28m, forming white-capped breakers, standing waves, bulging boils and countless miniature whirlpools swirling around the main vortex. Corryvreckan is a fair sized tourist attraction. At maximum current, high-speed ribs can be seen speeding toward the show with their occupants dressed in immersion suits, just in case.

As soon as we passed by, we got shoved smartly an all directions, but mostly to the side, by the increasing current, requiring us to tack again to stay on our course. The wind picked up, we accelerated and between our boat speed and the current, we spent half an hour or so going over 11 knots over the bottom. At one point, we hit 12.4! Fun. We were glad we weren’t trying to go the other way. We would just have to hover in place for six hours until the current reversed.

The wind also started going crazy just then, and not just because we were getting shoved around by the current. The wind died down to nothing within about thirty seconds right as we were in a back eddy, giving us our minimum speed of -1.4 knots in the desired direction to compensate for the +12.4 from before. We just sat there drifting for a while before the wind steadily increased to 30, causing us to rush on deck and wrestle furiously flapping sails to a smaller size. No sooner would we get finished than the wind would start a precipitous decline and we’d have to undo everything. It did this over and over again for most of the day.

Scotland! In most of the rest of the world, being in the middle of a big high pressure system meant calm winds and cloudless skies. We were getting huge winds, rough seas and rain. Not fair. The same thing also happens in low pressure systems, only with more wind. It seems the only time the weather is really nice around here is for a short while before the arrival of the next low. It may be a couple of days, it may only be a few hours.

At one point, I was dismayed to find a guy in a 20 something foot monohull perform a horizon job on us. I had seen him come up from behind us and made a note of his presence. I then got busy trying to coax any motion at all from our limp sails. A few minutes later, I looked up and saw him zooming past at a distance of a couple of miles, heeled over and going really fast. I looked up at our useless sails – nothing. From the set of his sails, it seemed as if the wind where he sailed coming from the completely opposite direction as we were seeing and there was plenty of it. We had to get over there.

By the time I managed to get Footprint there about fifteen minutes later, he was gone, man. The last bit of his sail was descending over the horizon. How humiliating! Beaten by a monohull.

We did find the wind though, and it was good. We had to put a reef in each sail, but we were going fast in approximately the right direction. The monohull’s sail got bigger, then we could see the hull. We were gaining on him but the damage was done. He bore off to some other location before we even got close. Well done, monohull guy!

As we approached our anchorage at the Isle of Gigha (pronounced Ghee-a), the Jura current turned against us. Even with a good wind, we were crawling toward it. It had been an exhausting day. We got up really early (2am) after little sleep and the sailing all day was real work, not the brief flurry of activity to get everything up and trimmed, but constant manhandling of everything and figuring out strategies to get us where we needed to go. My hands were chafed and sore from pulling on wet lines all day. My back hurt. My legs hurt. My brain was tired from thinking. I just wanted to get there, but the cruel current was making us go slower and slower. We had to wait until the current started dying off again before we finally made it into Ardminish Bay. We got the anchor set the first time amid lichen-covered rocks with the occasional seal, which was a huge relief. It was also buried in sand, which would make getting it up a bit less messy the next day.

It was a shame, but we were both too exhausted to enjoy what will probably be our last Scottish anchorage. We had a quick dinner and collapsed into sleep, ready for our early day the next morning (you’ve got to go when the currents are going).

The skies had cleared overnight and we enjoyed a beautiful sunrise on a mirror sea. The forecast was for nothing (low coming), so we knew it would be another day of boring motoring, but it was at least clear and sunny and the alternator would provide enough power to charge everything full.

It was clear enough that we could see the tops of Rathlin Island and the Antrim coast as soon as we were clear of Gigha.
Posted by SV-Footprint at 6:11:00 AM

Scotland certainly challenged you in many ways this trip. Fortunately, that sunrise surely made up for at least some of the misery. I'm feeling more and more lucky for the good weather we had during our brief trip there. I had no idea it was that rare.