[Kyle]I met the Laggan bridge tender as he showed up for work and asked for an opening. The poor guy hadn’t even managed his first sip of morning tea. Since it was early, there was only the occasional traffic and we managed to get through before any cars needed to stop.

From there, it was through a short and pretty section of canal before Laggan Locks, where we would start the drop back to sea level. We were now with two other rental boats, one with a couple on holiday, the other with a couple of staff from the rental company. Perhaps their company does one way rentals, perhaps somebody couldn’t take all of the bouncing off of everything anymore and gave up.

Our entertainment started after we had been lowered to the level of Loch Lochy and the lock doors were opened. The couple on the rental boat in front just kept standing there holding their lines, apparently waiting for something else to happen. We all sat patiently behind, engines idling, echoing their glug, glug, splash, splash noises off the chamber walls. We waited a bit more, exchanging the slightest of knowing smirks with the staff in the boat next to us. We chatted with the lock keeper to pass the time. Another couple of minutes passed and one of the guys on the other rental boat, with the well practiced manner of someone who is used to explaining the whole process to first-timers, went forward and quietly explained to them that the locking was done and that they could go now.

They looked a bit confused for a second, dropped their lines and went to start the engine. Then realizing they weren’t attached to anything, went and grabbed their lines again. Finally, they were ready to go and the lock keeper tossed them their lines with a smile and wished them a good holiday. 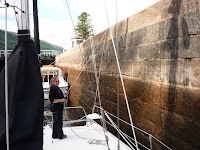 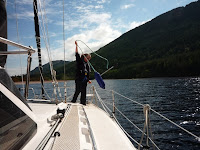 Maryanne manages the bow at the lochs, and fishes out a fellow boater's fender
About a mile or so later, we fished one of their fenders out of the loch, which we got back to them at Gairlochy, on the other side. They didn’t speak much English, but were all smiles and gratitude. They seemed to be having a great time in Scotland. The canal is a great way to see it. Later in the day, they came and watched us go through Neptune’s Staircase (rental boats aren’t allowed past the top).

We arrived at Neptune’s Staircase in Banavie around Noon and were told we’d go through after lunch. We passed the time by doing our laundry at the machines in the shower building on the quay. It isn’t all glamour. Footprint was still covered in big grains of salt from the North Sea crossing and I decided to give her a good rinse. We hadn’t had access to water anywhere else in the canal so far. Then I figured why not get out the soap and brush and give her a proper scrub? I’m not sure it changed her appearance much, but it made me feel better and it got the salt off. Those big salt grains act like ball bearings when walking on the decks.

After lunch, we were told they were going to lock another boat up before getting to us, so we had over another hour to kill. So…we gave the inside a good scrub as well and topped it off with long showers for ourselves, including, for me, my traditional Solstice haircut (sorry, Mom).

By the time the other boat made it through to the top, most of the onlookers had become bored with the process and wandered off, leaving us pretty much by ourselves for the process. Footprint was the only boat locking down. As we went further and further along, getting closer and closer to the main road, we gradually picked up more tourists.

With two or three locks to go, I heard a friendly “Hello”.

I looked up to see a man in perhaps his late sixties or early seventies with a shock of white hair and a very neatly trimmed beard and mustache that was each about ¼ inch thick. It was clear he spent a great deal of time every day with an assortment of specialty grooming tools. I’m always very suspicious of this. With a beard like this, you still have to go to the trouble of shaving most of your face every day while taking the additional time to make sure the edges of the pointless little line where your jawbone is supposed to be are perfectly even. Even though he was standing above me on the wall of the lock chamber, I could tell he was looking down his nose at me a greater distance than the actual one between us. He had a slight pompous smirk on his lips.

He leaned in as far as he could. “I wonder if I could ask you to change your flag etiquette?”

“Oh…really? I was expecting to then be quite correctly admonished for the tattered state of our Saltire, which looked in serious danger of disintegrating before we made it out of Scotland. It was a neck and neck race. Instead, he went on a long and boring diatribe about how the correct courtesy flag was the British red ensign and the British red ensign ONLY.

“The French fly the Saltire to annoy us. The Danish don’t know any better….” he continued.

Maryanne interjected, “But isn’t it a courtesy flag?”

He snapped back at me, not even deigning to address Maryanne since, as everyone knows, women are pathetic…..at growing stupid little beards. “In France, you would be arrested for not flying the courtesy flag!”

Not true (and you can believe Maryanne researched this).They may be annoyed, but they wouldn’t arrest you.

I tried to change the subject by asking if he had a boat in the area. “Oh, I don’t sail much, but I do like to see things done PROPERLY.”

Oh, go away, you old bore! I did not like this guy. The absolute nerve of a man with an overly practiced posh English accent walking the locks of the Caledonian Canal insisting that people lower their Saltires! I could hardly imagine that any Scot would find it less courteous to fly their Saltire than the more generic British red ensign, which would also be appropriate. The courtesy flag is meant as a nod of thanks to the country visited. Most of the visiting yachts in Scotland fly the blue and white Saltire.

I suppose I would be denied sponsorship to join whatever posh Yacht Club this guy belongs to on the basis of our courtesy flag etiquette or the fact that we were overheard calling the galley the kitchen or some other such rubbish, missing my chance to exchange anecdotes about that time we took the boat out last year over overpriced tumblers of rum, but I could hardly care less. By my last count, we have flown over a dozen courtesy flags to his….oh….none.

I surprised even myself by expressing none of this to him. Instead I thanked him heartily for educating me and setting me straight, implying that the very next time I had a free hand, I would rectify the situation with haste. He could leave with the smug satisfaction of thinking he’s “converted another one”. Perhaps he’ll leave the next boat alone. Unless, of course, they’re obviously a bunch of dirty hippies!

By the last lock, there were perhaps a hundred people all snapping photos of us as we motored out toward the sea on the way to the basin just above the Sea Lock.

We still weren’t done with our chores. Once we were tied up at Corpach Basin, we took or propane tanks for a nice walk along Loch Linnhe on our little wheelie carts. (“Sir, please keep back. They don’t like strangers.”) Luckily, there were no other propanes around. We would have never got them to heel. We got them filled at an autogas station a couple of miles away. Our autogas adapter for the tanks is one of the best things we bought. 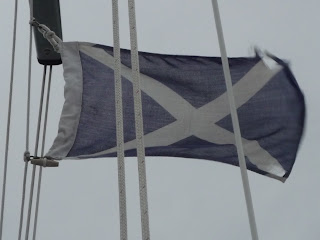 We really had stretched the life of our Saltire a few too many sails!
At the last locks before the basin, they let water run over the top of the lock gates for the night, making for nice waterfall noises in the basin, which we enjoyed with the Solstice sunset along with a nice dinner and, of course, a wee dram, still flying our Saltire.
Posted by SV-Footprint at 11:44:00 AM

I'm shocked...shocked, I say, at your politeness toward the arrogant man with the fussy beard. You ARE growing up after all ;-)

So fun to read your posts, as always. And Maryanne, you look terrific.

quel bore! i would've given that insufferable prig a piece of mind. but then, i quite clearly haven't grown up. i'm not sure how i'm not a u.s. senator, actually. good for you, kyle, for taking the high road. but admit it, it's just the view you're after :)