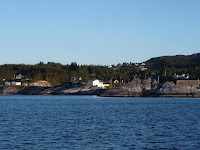 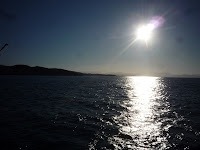 Leaving Bergen and Norway
[Kyle]We left Bergen in the bright dawn of midnight. Our route took us in light tailwinds along a pretty path that meandered through rocky islands for about twenty miles before we met the open sea. Once we got there and turned on our course to Inverness, the wind increased and we started moving fast. As we sailed out of the protection of the last island, the seas picked up dramatically. Within about five minutes, we went from flat water to 3 meter seas that rolled us uncomfortably as they broke on the beam, slewing us sideways. Based on our original forecast, I thought it would be necessary to head a little south of a direct course to keep from getting the full brunt of the strong winds and waves but we found we could actually keep to our course and keep moving fast.

About a third of the way across, a predicted change in the wind from northerly to southerly arrived so we tacked and slowly started getting pushed north of our course toward the northwest. The wind died and then came up again several times all while staying southwest and pushing us further northwest. {Maryanne: all typical sailing frustrations!}

In the middle of the night during one particular lull, we passed close by an oil rig, BP Harding well 93b. I can’t say it looks like a nice place to work, way out there in the middle of nowhere. That place is all business. I saw lots of rusty metal doors and the innards of machinery they didn’t need to cover, but no windows, no outdoor break area, no signs of life at all. I was glad to keep sailing by.

My original plan with regard to the period of southwest winds was to slowly head northwest until a frontal system brought in strong north winds that we could ride into Inverness. It turned out we were going a little faster than I had originally expected so while we were still about nine hours from the forecast wind shift, we came within sight of Fair Isle, itself about three hours off, and made the decision that it would be better to wait out the wind shift there than at sea and put into harbor.

I would have loved to stay longer, but we needed to catch the northerly winds as soon as they came. The forecast called for the winds to increase as far as Beaufort force 9 (41 to 47 knots - pretty appalling weather) within a day or so afterward, worse in the north and east. We needed to catch the winds while they were still a reasonable strength and use them to get south and west where they wouldn’t be so bad. A delay would mean we would be trapped for days and Fair Isle’s harbor is dangerously exposed toward the north.

I had intended to at least get out and have a look at the Puffins, but by the time we got done securing Footprint for the short night, we were pretty bushed. The wind was now swinging through west and was starting to blow pretty hard. Any reasonable Puffin would have been well buried in their burrow, so we decided to go for a couple of hours of sleep instead {after a quick call to UK immigration to let them know we'd arrived}. 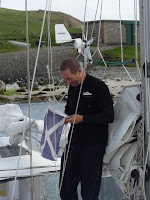 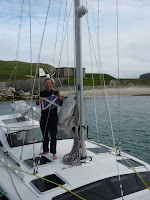 Following procedures after arriving in Fair Isle, UK
We left just after Midnight. As soon as we were out of the harbor and made the turn southwest, we were grabbed by the wind and shoved smartly toward Inverness, enjoying the relative comfort of a fast downwind sail.

We made it the 150 miles to Inverness just after Midnight the next day and tied up to the piling at the Clachnaharry Sea Lock. Even though we were only a few hundred miles south of Norway and the Shetlands, the night was noticeably darker. We actually had to break out our headlamps while we tied up to see what we were doing.

Once again we crashed for a short sleep (too short), needing to be ready for an 8am opening.
Posted by SV-Footprint at 3:40:00 PM