A whole lot of Fort Augustus

[Kyle]I had originally intended to get pretty far through the canal but I was foiled. First, it was sleep. We just couldn’t seem to get out of the bed until about 9:00, you know, because of all of the gravity. Then my computer played up and I had to disassemble the thing and put it back together before it was happy. By then, it was lunch and the lockkeepers were gone. Then they sent a whole fleet of boats going the other way through first. THEN there were too many boats for one lock, so we had to go second. 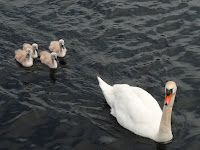 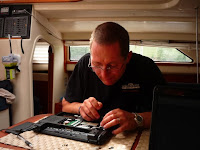 So many distractions gave us a late start to the day
We didn’t actually mind going second. That put us with three other rental boats instead of five. We had spent most of our time waiting being entertained by the antics of the holiday rental fleet. Those poor people seemed to have the most terrible time controlling their boats. I don’t know if the unfamiliar controls are just confusing or what. The rental fleet is all equipped with bow thrusters – little electric propellers that shove the bow one way or the other. I can only imagine that, during the original briefing with the nice man from the boat company, he says something like, “This is the bow thruster. Use it to turn at low speed.” 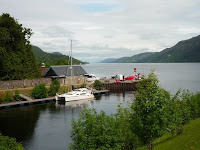 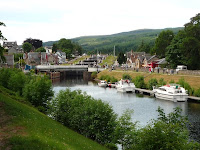 Fort Augustus
Every time one of these boats gets into a predicament in close quarters, which is A LOT, we can hear bow thrusters going crazy as the person at the helm vainly attempts to get the boat straight using just the bow thruster and nothing else. Usually, all that is really needed is to put the boat in reverse to keep it from hitting the thing in front of it, but in the panic, they seem to head for the bow thruster.

We came out of one lock and found a rental boat wedged in bow first into the tiny space between two other docked boats, perpendicular to them. Three sets of arms splayed out each side fending off while the skipper nuzzled his way further in with the bow thruster. One crew of a boat we locked through several times with seemed to have no control over their boat whatsoever. At first, it was amusing and a little worrying, but after a while, we started feeling for them. This was not the vacation they wanted. As they were untying from the dock, Maryanne went over and gave them a few simple pointers, like disconnect the leeward line first so the wind straightens the boat rather than sends it sideways. They were very grateful but, alas, after the next lock, we found them bow into the wall, thruster going crazy, each holding a line they couldn’t get to the wall from that position, looking forlorn. At least they weren’t making it any worse by yelling at each other.

We finally got away from the Fort Augustus flight at about four. Then we had to keep waiting in each lock for the slow rental boats to catch up. At the end of the day, we raced across Loch Oich to arrive ten minutes after the bridge tender had gone home for the night.

Total distance: 7.1 Nautical miles. Oh, well, Loch Oich is beautiful and the weather was nice and summery. Maryanne made a particularly yummy batch of soup, which we ate feeling pretty happy with our lot in life.
Posted by SV-Footprint at 4:54:00 PM

A good soup fixes almost everything. Except tourist boats. Hilarious description, Kyle.
I'm wondering what Norway is like farther north.It was so breathtakingly beautiful, I wonder if the entire country is the same. Surely there are ghettos somewhere...right?
Loving the reading and spectacular photos as usual.

Watch out for falling cinder blocks.