A day sailing in Greece 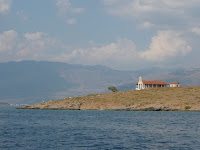 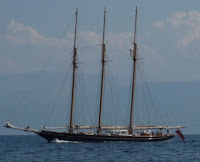 [Kyle]Our anchor was well buried into the deep bottom by Áy Ioánnis {Maryanne: there seem to be at least 5 different spellings for this island} after the storm, so it took quite a bit of effort to get it aboard. There was enough of a hint of a breeze that I decided we could sail out of the anchorage {Maryanne: I looked on skeptically but know enough to not ruin his fun and persuade Kyle otherwise, the wind would speak for itself eventually}. We cleared the shallow spot that had worried us as we arrived, steered into deep water and then the wind stopped. “It’ll be back”, I thought, and patiently waited. Fifteen minutes later it had still not arrived. More waiting… Nothing. Wait some more…Nope! I think the wind is gone. During our high-speed getaway under sail, we hadn’t managed to get moving fast enough to start our speed wheel spinning so our trip log still read 0.00NM. Depressing.

We started the engine and after, oh, about 0.00NM, the wind came up again. Doesn’t it just figure? We ran the engine long enough to give it a reasonable amount of time at normal operating temperature for it’s own health -20 minutes or so. By the end, we had what looked like pretty reliable winds out of the east at 6 or 7 knots. We shut down the noisy motor and hoisted sail. Then the wind DIDN’T stop. In fact, it was one of the steadiest winds we’ve seen. It blew all day at 7 knots from the same direction.

We were trying to go in that direction, so we had to beat to windward. It wasn’t bad at all since the seas were flat. Our boat speed was added to the wind speed to make for a nice cooling breeze coming over the deck to counter the intense heat. We made one long tack all the way to the southern shore, then turned and headed back northeastwards. The wind started to taper off right as we got to the point where we were going to start the engine for the entry into Galaxidi harbor.

Getting into Galaxidi harbor requires a long, hooking turn that passes between reefs and islets, so that it does not become visible until the last moment. Once in, we found the harbor wall packed, with a few overflow boats anchored to the northwest. We decided to pull in anyway to see if there was a spot our draught would allow and just to make sure there was nothing available. From ashore, we heard a shirtless man in camouflage pants yelling “Hello” at us. He told us to wait 10 minutes; somebody would be leaving, and then motioned us to a different spot on the wall. When it became clear the boat on that spot had no intention of moving, he waved us back to our original spot where a runabout was just setting off from what seemed like a pretty narrow spot.

This was going to be a little trickier than Argostoli, where there was plenty of room. We set the anchor and began backing into the spot. The shirtless man was yelling all kinds of directions to me in Greek, most of which I simply ignored. As we neared the wall, I needed to communicate with Maryanne in order to get the distance just right, but this guy was yelling so much, we couldn’t hear each other. I ended up yelling at him to be quiet so I could hear her. The people on the boats either side of us also started telling him to keep it down and let me concentrate. In the confusion, Maryanne had come back to try to hear me, then hurried back to the bow to snub the anchor. As soon as she turned around, she stepped on a boathook, which rolled out from under her, plopping her unceremoniously on deck. Worried for her, all of us on the boats started yelling at the guy to just shut the hell up {Maryanne: While I sat on the deck bleeding – OK, all I’d done was rip off a scab from an earlier cycling injury on my big toe, basically I was fine!}.

She was injured, but able to carry on. As we got everything secured, it was explained to us that the shirtless man was the town drunk, who had appointed himself unofficial harbormaster, and used that role to obtain the odd €5 or even a beer. He was harmless enough; just don’t pay too much attention to him. I was annoyed at all of the ‘helpful’ yelling, but we wouldn’t have known a space was coming open without him, so I’m not sure how I feel about the guy. At least he keeps himself busy.

[Maryanne] Our new neighbours were all very friendly and helpful – despite our tight quarters and the crossed anchor lines (although we had a line our perpendicularly from our dock, not all the other boats had!). During my slip and ungracious landing on the deck I’d manage to kick our deck hawse pipe cover from the deck. Once we were secure and settled Kyle volunteered to see if he could recover it from the bottom and found it on his first dive down – fantastic! We’ve lost enough to the bottom of the ocean so it was great to not have to source yet another replacement.

So – our new home for a while: Galaxidi. We arrived safe and well with not too much blood spilt.
Posted by SV-Footprint at 5:56:00 AM

that cracked me up! the town drunk, posing as harbor master, OMG! true enough, it's hard to know if you should be annoyed or grateful. but as a story? too funny! (maryanne, i hope you're on the mend. sometimes having a scab re-open hurts worse than the original injury!)