[Kyle]Our first full day in Ushuaia started with the orange light of the sunrise streaming through our east facing window. The sun was centred right in the middle of the Beagle Channel and there wasn’t a cloud in the sky.

A nice start to the day

We rushed through breakfast and then headed out to have an all-day amble through town. We started by heading for the causeway where Ushuaia’s first airport was located. It’s still there and serves as the general aviation airport now that the new airline terminal with the big runway has been built just on the other side of their fence to the south. The town sits on a hillside and we figured we would be far enough away over there to get a decent view of it. It turned out to be mostly a view of the boat and shipyard junk between us and the town.

On display outside the airport was the last DC-3 used by the Argentinian Coast Guard, decommissioned after landing in Ushuaia on its final flight. The venerable DC-3 was THE airliner in the 1930s and 1940s and it’s always a pleasure for me to be able to go right up to one and give it a good walk-around. I’ve even been fortunate enough to ride in the back of one on three different occasions, although I’ve only been through a landing twice.

While I was admiring the big radial engines, a man walked over from the hangar and invited us inside to their free aviation museum. We weren’t on a schedule, so we went with him.

The museum turned out to be the DC-3, most of a replica of a Henkel float-plane (which was the first airplane to ever come to Ushuaia, landing in the Beagle Channel), and a handful of modern piston powered trainers. The Hangar actually looked like the one at the last flight school where I worked. They did a pretty good business selling scenic flights to tourists. Without any real pressure, he suggested that if we were interested while we were in town, he would be happy to take us up. He talked in Spanish and broken English about the amazing views and assured us that small planes are safe, fun and comfortable. We thanked him (I didn’t tell him) and told him we’d think about it. We did, but our thought was that we didn’t like the price. We made our excuses and headed back to town.

We walked along the waterfront for a while through what seems to be the Memorial District. There were monuments to fallen police officers, Coast Guardsmen, fishermen lost at sea, plus a few more we couldn’t figure out. The most space was taken for those lost during the Falklands War. Gulp! Maryanne decided to let me do most of the talking in the event we found ourselves in a rough bar by the base.

We turned 90° and headed uphill through the local graveyard. Graves here are above ground mausoleums packed closely together with families stacking new arrivals on top of earlier ones. It was clear that most started out being very elaborate and well kept. Many of the older ones were suffering from neglect, eventually becoming repositories of bags of cement and paint until the next level was needed. It seemed a pretty grim place to spend eternity for a society that is heavily Catholic.

We had been looking for an ATM. We zigzagged to almost every bank in town with no luck – transaction not available. We couldn’t tell if it was our card or the ATM. We noticed several locals having the same problem and later learned that it wasn’t uncommon down here for machines to run out of money. The internet was so slow that we had been unable to get hold of our bank, so we still weren’t sure.

We decided instead to just browse the many climbing and souvenir stores that seem to make up half of the town. Nope, nope; too expensive, too kitchy, too big. Time for lunch.

The menu outside a Turkish restaurant looked reasonable so we went in – and had pizza. What? I know. I also got introduced to an Argentinian thing called a submarino.

A submarino is not a sandwich, but a glass of hot milk served with a chocolate bar. You take the chocolate, which is often in the shape of a submarine, and put it in the milk. The chocolate bar melts, dissolves somewhat and sinks to the bottom somewhat. This creates a drink that starts off as slightly chocolatey-tasting milk that gradually gets sweeter and stronger until you end up with really lovely tasting chocolate sauce at the bottom. As you can imagine, that wasn’t my last one. 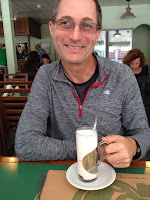 Prison and a 'Submarino'

Fuelled up, we went to the other side of town to the prison museum, which is actually a whole lot of museums housed in the old prison. There were whole, huge sections with more information than we could ever absorb about not only the prison, but the history of the area, Antarctic exploration, the native Yaghans and a huge art section. One of the parts that made a big impression on us was the Historic Wing. Instead of more exhibits, as we expected, the Historic Wing was just a cell block that hadn’t been converted to museum. In spite of the fact that it was one of the warmest days of the whole summer, the cells were soaked through with the kind of damp cold that you can’t overcome. This must have been a miserable place to be a prisoner; sentenced to years of never being able to get warm. We were glad to be able to leave and walk in the sunlight.

We dropped our bags at the Albatros (Spanish spelling) with the intent of turning around and heading out for dinner. Lunch had been big, so we weren’t too motivated. Sitting down, the toll of spending hours on foot got to us and we just decided to call it a night and make do with some of our haul from the grocery store the night before.

Graveyards and prisons, oh my!