[Kyle]A couple hours after leaving the gloom at Deception Island, the sky began to clear, until we were left with a brilliant blue sky with just enough cloud cover for dramatic effect. A couple hours after that, Expedition rounded Livingston Island and headed toward the unoccupied Argentine base on the smaller Halfmoon Island, which is located within one of Livingston's bays. The anchor was lowered and the zodiacs were put in the water for the afternoon's excursion.

Icebergs on our zodiac tour

We were landed on a beach toward one end of the island. There, we were greeted by much tamer seals lounging near the hulk of an old whaling boat. We crossed over a saddle to the Livingston side, passing several different groups of Chinstrap penguins along the way. We walked along a cobbled beach full of more seals before angling back up the hill towards the island's main Chinstrap colony at the top. Hidden among the Chinstraps was a lone Macaroni penguin that has apparently been living among them for over a decade. 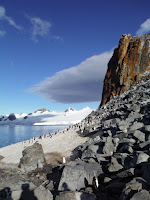 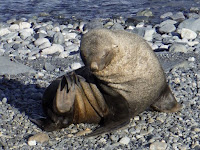 Another trip ashore to wonderland!

It was at the colony that Maryanne started to feel a little queasy. The dense colony had been a bit more pungent than we had encountered before and it was getting to her. We retreated to some fresh air, but that didn't seem to help. Eventually, she decided to return to the beach and wait for a zodiac back to Expedition. I lingered for a while taking pictures, but still made it to the beach before her zodiac left. We returned to the ship together.

There had been a stomach bug making its way through the ship since leaving Ushuaia. The ship's doctor, Kristina, was aware of it and had briefed us all very well about the importance of frequent hand washing and avoiding contact with those who have been sick. It looked like Maryanne's number finally came up.

I talked to the doctor while she lay in her berth. She said she could give Maryanne something to reduce the symptoms, but it would also slow the progression and recovery from the illness. Otherwise, I was told, Maryanne would have a rough eight to twenty-four hours. Maryanne decided to tough it out and get it over with.

Our final evening in Antarctica was a beauty

Well, at least it happened at the very last stop. It was a shame, though. It was a beautiful clear evening as Expedition left the island and began the trip back to the NNE along Bransfield Strait. The sunset was gorgeous and one last time, the ship was surrounded by whales feeding by enormous blue icebergs in the last of the light. It was a perfect goodbye to the frozen continent. It was such a shame Maryanne had missed it.

I checked on her again. She was feeling the same and insisted that I go to the evening briefing without her. I showed up late and ended up standing in the back. A slideshow of the amazing entries for the black and white photo contest was shown and then a countdown was announced of the winners. I was shocked when my photo of the spotlight during the blizzard won me the first prize of a bottle of Malbec. There were some very good entries in there. Mine was just unusual.

I have to give Maryanne a lot of the credit. On the night I took the photo, I was going to leave the camera in our cabin since it was dark outside. Maryanne suggested I take our little waterproof camera in a pocket just in case something interesting happened. I also wasn't even going to submit an entry into the contest, but she did it when I wasn't looking, so I couldn't have done it without her. The bartender told me he would find me at dinner and make sure I got our wine.

Expedition made a big left turn into the English Strait, passing by our first stop at Cecilia and Barrientos islands. This kept the ship's motion to a minimum as dinner was served. I had a quick look outside and then headed to our cabin to check on Maryanne to see if she might be feeling up to eating. The dining room was abuzz with conversation as everybody relived their trip. There was a heightened sense of celebration and I didn't want her to miss it. She still felt lousy, so I rushed up to try to get some food for myself.

I got there just as the last of the desserts were being cleared away. I managed to get a slice of chocolate cake and my bottle of wine to take back to our cabin. It was disappointing. I felt like I had missed the whole party. I returned to our cabin alone. Maryanne was asleep by then, so there was no point opening the wine. I ate my slice of cake and went to bed. Almost as soon as I turned out the light, Expedition passed abeam Greenwich Island and exited the English Strait. We were now back in the open Drake Passage. The swell arrived and the ship started to roll back and forth.