[Kyle]Upon returning to our hotel following our anniversary dinner, we were greeted with an email saying that our tour the next day to a third glacier had been cancelled due to a damaged propeller on the boat used. We were offered a couple of different options to pick from as an alternative. We selected to do a small trek on the Perito Moreno glacier, sent a reply email and hoped they would figure it out before the 0700 pickup.

We were starting to get a little nervous the next morning when a minibus showed up at 0730 to pick us up. The driver emerged with a list of names of which included us. Excellent! The drive took us past where we had gone the day before, entered the National Park, and snaked its way along a winding road that clung to the hillside as we descended to the lake.

A quick ferry across the upper arm of the lake deposited us along the edge of one side of the glacier. There, we were given a quick briefing before following a short trail to a cluster of huts right at the edge of the ice. At the huts, we made a brief stop to be fitted with crampons, and then continued onto the ice. 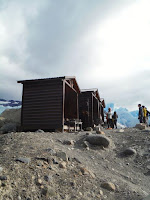 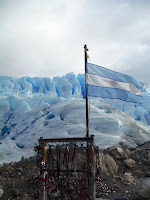 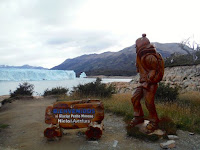 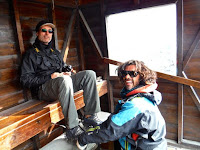 Getting ready for a walk on the ice 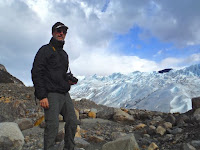 Since the glacier is constantly moving and changing, a new trail is mapped out every couple of weeks for the brief part of the season in which the ice is open for trekking groups. Too early in the season, hazards on the ice are covered with snow. Too late, and the ice becomes too soft and unstable. For us, the most stable part of the glacier was at a point where the ice crested a bump in the valley floor. This caused it to fan out into ridges and spires called seracs, with deep crevasses in between. It was explained to us that this was safest for two reasons: the widening of the crevasses at the bump made them easier to spot and avoid and it meant the ice was grounded, instead of floating, so there was no chance it would just collapse under us. 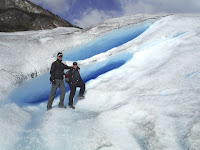 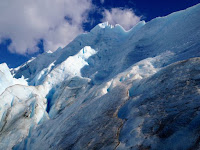 All of this meant that we got to walk around on the glacier within some very dramatic ice structures. There were ridges and valleys and lots of switchbacks and blind corners. My favorite were the moulins, where clear streams of meltwater flowed over channels of blue ice before plunging out of sight to the valley floor through a hole in the glacier (the moulin part is the vertical well part where the water heads from the surface to deeper within the glacier). There, it joined with thousands of others to form a river that runs under the ice towards the lake at the calving face. 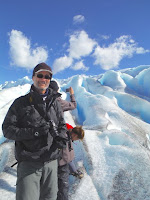 Near the end of the loop trail, our guide and his assistant stopped at a couple of tables, retrieved a crate from underneath, and opened it to pull out glasses and bottles of whisky. They chopped a chunk of ice off of the glacier, broke it up further with a pick and started clinking it into glasses. Next came the whisky, and then the glasses were distributed for a toast. That was a nice touch - whisky on ice while standing on the same ice. 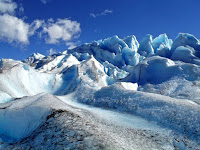 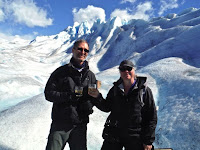 Now, for Scots and other whisky purists (such as myself) who may be thinking that whisky is properly enjoyed without ice because 'it bruises the whisky', let me assure you that this particular whisky, (which WAS from Scotland) was much improved by the ice - not because the ice was so great, but because the blend they used was a bit rough. I should have guessed they wouldn't be giving away the good stuff.

The boat takes us by the face of the glacier

On the way back from the glacier, the bus took a detour to a massive series of interconnected viewing platforms opposite the calving face. We were dropped off at the end and told we could either re-board in a few minutes or proceed to the other end for pickup there. Of course we chose to do the walk.

We stopped at about the third platform, where we paused for a while to admire the jagged blue ice in the changing light created by the moving clouds. We saw a couple of big chunks calve off and disintegrate into slush, throwing off waves in a ring. A couple of platforms later, we started to realize that the time allotted to get between the drop off and pickup spots did not allow any time for stopping. They take us to a viewpoint and don't allow us enough time to look at the thing? That's crazy.

Views from the platform walk

Our pace quickened as we went until we were in a pretty good trot at the end. Some of those that weren't in the best shape were really huffing and puffing to make it in time. As soon as we were all aboard, the bus took off. It had been sitting on the lot in the sun for a while, so it was really warm inside. We were all overheated from our mad dash and were clawing at the little vent windows to get some airflow for relief. Once the bus got on the fast road and picked up some speed, everybody got comfortable and promptly fell asleep.

Back in town, we ducked off at the first stop, telling the driver he could skip our hotel. We wanted to have a long walk back along the shore of Lago Argentino to a wildlife preserve just on the other side of the town. It was a bird sanctuary and we were particularly interested in seeing if we could spot any of the local species of flamingo. When we got there, we discovered that much of the preserve was flooded and the trails were impassable due to the high water. The flamingoes had also left for the season, so there were none to be seen.

The Perito Moreno Glacier drains into the lake from one side at a bend in the valley. The lake forms one arm and the bottom of a Y, while the glacier approaches from the other arm. Periodically, the ice makes it all of the way to the opposite shore, where it forms a dam separating the lake into two. Meltwater fills the uphill arm, while the downhill arm drains as normal. A warm spell or a breach of a weak spot will break the ice dam and send water from the upper arm flooding through the gap. A couple of days before, when Maryanne and I were driving to Rio Grande, the most recent ice dam broke. Water in the upper lake had by then reached ten meters higher than on the other side. Within less than an hour of the breach, they were at the same level. Water levels on the larger lower arm rose by three meters and were still a meter above normal three days later. 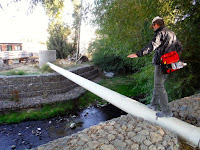 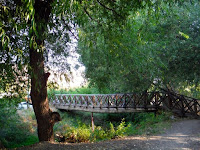 Finding our way about the less travelled part of town!

With our nature preserve plan off the table, we decided to have a walk along what looked on our map to be a park that ran along a river just outside of town. It turned out to not be a park so much as an area without houses with no real path in evidence. We then followed the adjacent road to a bridge that we could cross to get to the town center. It turned out to be no more than a big pipe over a big drop. We proceeded to the next one, which did end up being an actual footbridge that would finally let us get to our hotel. We headed out for dinner at the nearby sports bar and called it an early night. We had been getting up so early for so many days in a row, that we were getting pretty desperate to get a full night's sleep for a change.

All so beautiful and amazing. The photos of the glacier and your hike within all the ice structures were just spectacular. And to enjoy a whiskey on ice FROM the ice you're standing on?! That's one classy, clever way to top off a perfect day. I'm sorry the wildlife preserve wasn't accessible - I remember you'd talked about wanting to see it. Certainly there were plenty of other incredible sights and sensations to make up for it, though!