Arriving Back in Tierra Del Fuego

[Kyle]Our plan was to be out on deck enjoying our glorious return to Ushuaia as Expedition made her way up the Beagle Channel. Just after we entered, we were told the port of Ushuaia was closed due to high winds. Expedition would now be anchoring in the Beagle for the night, with the plan of getting under-way again in time to be berthed alongside at first light. 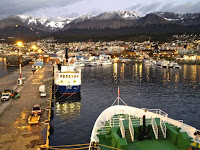 Dock, leave the boat and hit the road to explore Tierra Del Fuego

After the previous rough night in the Drake, everybody seemed ready for a good night's sleep at anchor. That was until they told us we needed to have our bags packed and outside of our cabins by 0630. We would have breakfast then and then disembark in groups afterwards.

Maryanne and I were in the last group, so that meant we left the ship at 0800. The expedition staff all came out and made a point of each saying goodbye to each one of us personally. While they were doing so, provisions were already being loaded aboard behind us for the next trip, which was their last of the season. The crew had six hours before the next group of wide-eyed passengers would be coming aboard for their first day.

We had booked a night in the Albatros for our return, so we headed there to check in and try to use their internet. I especially needed time to review and submit my bid for my next month's work schedule. Most of the other people who had been on the ship had the same idea and the Albatros' already slow internet ground to a stop.

We decided to head out for hot chocolates at a place nearby that we had run out of time for before we left. They weren't open, so we found ourselves in an all-too-familiar for us position of going around town trying to locate ANY internet.

We finally found a decent signal at the tourist office once they opened and I was just able to place my bid before it was time for us to be heading to the airport.

We weren't leaving yet, but we had booked a 24-hour car rental from there so we could return it and then just get on our flight out the next day. It was also half the price versus renting one from the same company from their office across the street from the Albatros.

We had no real plan, but since Ushuaia is at the end of the only really long road around, we basically decided to get as far north as we could in the time that we had. We figured we would stop anywhere that looked interesting and stay for as long as we liked while we were on the way out. On the way back, we could make a straight shot because we would have already seen the interesting places on the way up.

Almost immediately after leaving Ushuaia, the chaotic traffic ceased. We entered the mountains of Tierra del Fuego National Park where we had a smooth, winding road almost completely to ourselves. We stopped at several viewpoints that looked out over big green glacial valleys and imposing peaks.

We left the mountains and came to the southern shore of Lago Fagnano. There, the road followed the curve of the lake to the northeast.

Lago Fagnano lies in the gap between two tectonic plates. On the south side, steep mountains come right down to the shore. The land to the north starts off as very gently rolling hills which soften into flat plains to as they slope away to the Atlantic coast. As we left the lake, the road straightened and the going got faster. We were entering ranch country.

We had intended to stop at a little town called Telhuin for lunch, but there was almost no sign of it from the road. A couple of billboards hinted that we were getting near, then we passed over a rise and it was suddenly clear there was going to be nothing for quite a while. We decided to continue to the next town about 100km further. {Maryanne: Telhuin was billed as a small town, and a great place to grab something to eat - but in reality it was a truck stop with a small shanty town behind it... not quite the picturesque lunch spot we had in mind}

Rio Grande appeared on the horizon and grew larger. It was quickly apparent that there was no way we were going to accidentally drive past. Huge warehouses formed the walls of a canyon through which the road threaded. There were traffic lights at almost every intersection and the traffic became a snarl.

The city had been originally founded as a company town for one of the big ranches in the area that controls most of the surrounding land. The ranch still exists, but automation has reduced the number of hands needed. Since then, Rio Grande has moved into other industries, aided by tax incentives from the government. The area now exists as kind of an extended company town for lots of big factories and distribution centers.

There is complex after complex of hastily built, perfectly uniform housing. Most are made from corrugated metal with some stucco and all are painted in exactly the same way. At the edges of these are a scattering of bodegas, newsstands and takeout places which seem to serve the housing units. Filling the gaps in between are lots of houses built of what appears to be the corrugated metal scraps from the construction of the complexes.

None of these housing developments appeared to have allowed even a tiny budget for any public space whatsoever. There were no parks, no picnic tables, no benches, no grassy medians, not even any sidewalks. People lived in neighborhoods where there was nothing but dust and clutter right up to their front doors.

The City itself seems to have at least tried with a smattering of public space in the town center, but it was all clearly done as a grudging afterthought. Most of it involved painting surplus concrete, angle-iron or pipe stock in garish colors and then calling it a day. These areas were surrounded by construction, dust and litter, which would have seemed a better target for the city's resources. Maryanne kept wanting to take pictures of how bad this all was for the blog, but it didn't seem like the kind of place it would be a good idea to whip out even a cheap camera.

It looked like living in Rio Grande would be an incredibly demoralizing experience. Everyone we encountered seemed to be plodding through the dust of their private lives. We never saw anybody smile. This gave the place a slightly menacing air. 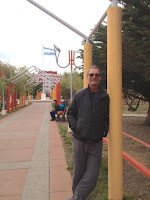 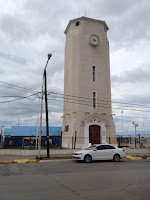 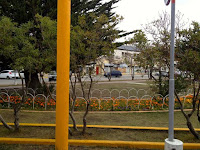 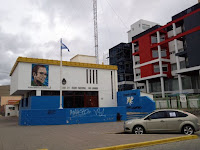 The only possible attraction we found in Rio Grande was padlocked

We drove around for a bit hoping to find a better part of town, but it never happened. We were pretty hungry, so we gave up and parked near the town center, where we could see a few places that seemed to be selling food. Upon closer inspection, most of them weren't. Most of the places that weren't boarded up were one form of second-hand store or another, each manned by a cheerless cashier. Our walk seemed to be taking us further from any industry, so we went sideways a block and then doubled back to the car. Along the way, we came upon a Tante Sara.

This was the inexplicable third restaurant in the chain. The other two were in Ushuaia, one of which was where we had our first big, delicious meal. It seemed to be BY FAR the nicest place in town. We knew the name and we were hungry, so we went in. The food was as good as we remembered in Ushuaia, but our server was clearly less amused by our level of understanding of her language. No mind, we were keen to get out of there.

We bought some delicious alfajores from their adjoining bakery to take as food for the road and then we took what we hoped would be the shortest route out of town. Once we were back on the open, empty road, we let out a sigh of relief at never having to see Rio Grande ever again. We agreed that based on our admittedly limited sample size, Rio Grande is: The Worst Place in Argentina. Don't ever go there. You don't need to ever go there.

To think, that morning we had nearly cancelled our room at the Albatros and booked a place in Rio Grande for the night. Only when we discovered our Ushuaia booking was non-refundable did we drop the idea of staying in Rio Grande - and now we realized how terrible that decision would have been - we were looking forward to getting back to Pretty Ushuaia and the comfy Albatros - whew!.

Back on the road with lovely baked goods upon which to nibble, our moods gradually improved. We were soon back in ranch country. Argentina is, of course, known for their delicious beef - which really is free range. Out here, they also have horses and sheep. Those are all things you can see lots of places. What's really cool are the native Guanacos. Guanacos are related to Llamas, which are more distantly descended from Camels, or at least the same animals from which another line ended up being camels.

Enjoying the wildlife and scenery on the drive back to Ushuaia

Maryanne was taken by the yellow "Guanaco Crossing" signs in the area and kept wanting me to stop so she could get a picture of one. Every opportunity seemed to come just as we passed it when there was someone coming up from behind. She made increasingly sad faces after each one until I finally ground to a stop in a cloud of dust in front of one. She was so pleased until I spotted a real Guanaco, for which I would not stop. There's the face again. Look away for a few seconds. Look back. Nope, still there. Try it again. Nope. It's getting worse.

I spotted a couple more and decided to turn around on the now empty road and go back. Jackpot! We found a whole herd standing right by the road. That had her squeaking with joy all of the way back to Ushuaia.