Back to City Life

[Kyle]Our flight from El Calafate to Buenos Aires wasn't until the afternoon, so we decided to spend our last morning there at the Glacairium, the local ice museum. For this, it was necessary to board a free shuttle at the bus terminal for the ride to the site, which was well out of town.

The view around the museum!

We were expecting something like the BreMuseum, which we had gone to in Norway, but it was quite different. The BreMuseum focused a lot on the physics of the ice with lots of hands-on demonstrations of how plastic it gets under pressure and how it flows around things. The Glaciarium seemed to be more focused on the big picture, with lots of information about the whole process from snowfall to calving. This was tied into the whole global structure, explaining the similarities and differences between South America's north and south Patagonian ice fields with other types in other parts of the world. There was also an interesting section on the various expeditions that have crossed the full width and even in some cases, the full length of the ice fields (The latter wasn't accomplished until 1998). Many took weeks, averaging just over three miles per day, about the width of the terminus of the Perito Moreno glacier.

Following our trip through the museum, we bought two tickets to the Ice Bar, located in an industrial freezer underneath the museum's coffee shop. To keep from letting too much heat in as people come and go (and probably to avoid hypothermia), tickets are valid for a set thirty minute time period at the open bar. 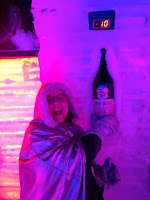 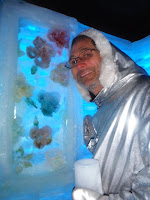 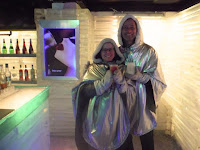 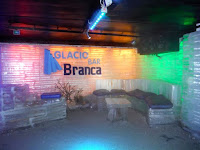 Wrapped up for fun in the bar

Once our time came, we were shown downstairs with four other people, fitted with capes and mittens, and admitted into the bar, where a prominent thermostat read -10° (Celsius, 14° Fahrenheit). We were given a choice of a big glass for mixed drinks or a little glass for shots. These were made of ice and we would keep them with us for refills. Now we understood the need for mittens. The big rim on the thick glasses took some care as well and it was hard to look sophisticated drinking while balancing a slippery glass with a two-mitten hold. Fortunately, that's never been a big concern of ours.

Our bartender did not seem to be affiliated with the accounting department, and was happy to let us try as much of anything as we liked. They had beer and wine and plenty for mixers. We liked the effect of the colorful drinks in the opaque glasses, so we demonstrated our cocktail knowledge by ordering 'a red one' and 'a blue one'.

When it came time to leave, we all handed our glasses back to the bartender, who I'm sure must just toss them out the back door to melt. Instead of taking them, he filled them all up again for one more toast! That was fun.

I remembered the road being straighter on the way up. 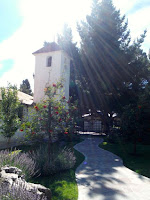 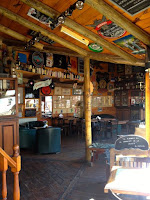 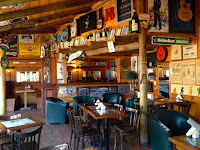 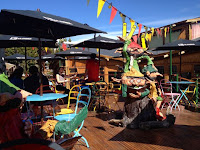 Exploring the town - mostly from a bookshop/bar

We had a little more time to kill in town before our flight, so we headed to a rooftop café/bar on 'Gnome Street' for some coffee and popcorn. It was a perfect elevated perch from which to watch the world go by and enjoy the warm weather. We really liked El Calafate.

Our cab ride to the airport was mercifully safer than our previous one.

On the other side, In Buenos Aires, we took the advice of our Lonely Planet and marched right past all of the cab touts to the taxi stand at the curb, where we were able to pre-pay for the same forty-minute ride to the city center for two-thirds the price.

The street our hotel is on turned out to be a pedestrianized one with the entrance right in the middle, so our driver was not able to pull up in front of the door. It was hard to even see the sign to be sure we had the right block. To our driver's credit, he didn't didn't leave us late at night with directions to head 'that-a-way'. He made repeated calls and waited patiently for a bellman to walk the half a block to meet us.

The last few minutes of our cab ride had been through an increasingly dodgy looking part of the city. I was starting to get a little worried about where I had booked us. I had reserved us a hotel using points earned at the hotel where I usually stay in Newark after commuting to work. There was none of their brand available, so I had ended up booking a Howard Johnson included in the plan as one of their affiliates. These tend to be pretty low end in the U.S., but it was all that was available, so I decided to just hope for the best. I was pretty relieved when the area brightened up considerably in the last few blocks before the hotel. We were just dodgy area-adjacent.

Our hotel actually turned out to be REALLY nice. It was more like a Westin or a Hilton than what I ever would have expected from Howard Johnson. It was certainly way nicer than that place I stay in Newark, which is perfectly acceptable. Whew!

Even though it was late, we were all buzzed from being in the city, so we dropped our bags and headed out for a short walk to orient ourselves. We ended up at a sidewalk café, where we were served french fries and beers by a sweet waiter who I'm sure must be known by several kids as their favorite grandfather. It was amazing to be sitting there watching night scenes in Buenos Aires while listening to people converse all around us in the local Spanish accent. We couldn't help but just look at each other and smile.

That adorable picture of the two of you all bundled up at the ice bar needs to be your next Christmas card! What fun!