[Kyle]Once again, I was the first one to make it to the lounge for morning coffee at around five o’clock. The swell had decreased through the night and was barely noticeable. A study of the chartplotter repeater display by the lounge showed us to be still around 30 nautical miles away from our first waypoint in the South Shetland Islands. That screen only displayed limited information, so I snuck a visit to the bridge to look at the real chartplotter. Our ETE to the waypoint was just over two hours. After that, it looked like another two before the end of the route. I asked the Bridge Officer about icebergs. He showed me one on radar over the horizon, but said he hadn’t spotted one visually, so the contest was still in the air.

I went outside to see what I could see. It wasn’t whole lot. It was dark. No stars were visible. A cold drizzle hit me in the face. Meh – back inside.

The ship turned and entered the English Strait. After a while, we spotted our first iceberg. That sent nearly everyone outside. It seemed to be around the size of the ship and there was a lot of discussion on deck about whether or not it met contest criteria.

Mountains slowly began to appear out of the haze. Whales could be seen spouting and someone even spotted a raft of penguins streaking through the water. Ahead, a small group of rocky islands appeared. These were the Aitcho Islands, named amusingly after the Hydrographic Office (H.O.) that produced the first accurate charts of the area. I’m assuming it was the U.S. one, since the Brits would surely have called them the Haitcho Islands.

Expedition dropped its enormous anchor and the first group, which included me and Maryanne, were told to report to the mud room for disembarking. We donned a whole bunch of layers, followed by waterproof boots and our parkas and then lined up at the door. The mud room is deliberately kept warm and dry, so we were more than happy when it was our turn to go out into the cold for the ride to shore. We were given about a thirty minute tour of the anchorage before we made landfall. Our driver took us slowly past the beaches of both Barrientos and Cecilia islands as well as giving us our first close up encounter with many of the bigger chunks of ice dotting the water.

Our first trip to see the animals close up

Along the shore of Cecilia, we noticed some commotion and went over to find a leopard seal that had just killed a penguin. Leopard seals are generally only interested in the blubber on a penguin. They flail the bird around until the skin comes off inside out. Then they scrape off the fat, leaving the water chummed with the rest of the carcass to be fought over by southern giant petrels. It was a gruesome, violent scene, but it did concentrate the wildlife where we could get up close.

We returned to the ship for a quick (and big) lunch and then headed back to the boats for a trip to the islands. Maryanne and I first landed on Cecilia with half of our group. The other half went to Barrientos to keep the impact on each island as low as possible. Cecilia was home to a few fur seals and a colony of petrels as well as a few adorable Gentoo penguins. Plus, there was also my favorite, a trail to a viewpoint! 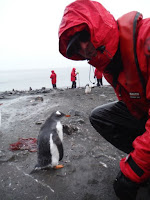 We climbed up to see the petrels as well as to verify that the ship does indeed look shorter from above. Hill climbing in Antarctica presents the added level of difficulty of wearing thirty pounds of barely breathable waterproof clothing while doing so. Walking too slowly keeps you from getting warm. Walking too fast makes it get clammy in there quickly. If you start to sweat, everything will get wet and then staying warm gets even harder.

When we were done with our hike, we were shuttled over to Barrientos while some of the people there were shuttled to Cecilia. Barrientos is home to large colonies of both Chinstrap and Gentoo penguins. The Gentoo chicks were late in their fledging, perhaps even receiving one more meal from their parents before setting off on their own as adults. The parents make the chicks work for the meal by making them give chase for it, sometimes all the way down the hill and into the water. In this way, they are taught how to swim and where the food really comes from. 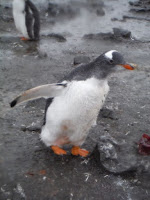 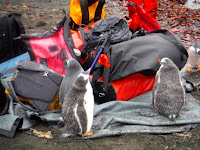 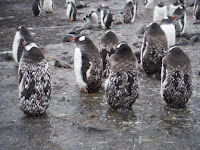 At this stage, the adorable chicks are super curious. While the adults are at sea feeding, sometimes for days, the chicks wander around exploring and looking for their parents in every returning group.

We were required not to approach penguins within 5 meters, but we didn’t have to back away if they came towards us and narrowed the gap so long as it was apparent we weren’t causing them any distress. If they are trying to scare you away from a nest, back away. If they’re just walking up to you, let ‘em walk.

That was the plan anyway.

Almost as soon as we had two feet on the beach, they’d come toddling over to see what we were, tilting their heads to get a better look at us and pecking at our boots. One of the expedition team, Lauren, got an adorable video by putting her GoPro on a mini tripod at penguin level and leaving it running.

We slowly made our way from the landing point to the Chinstrap colony on the other side of the island while trying to find a clear path through and being followed by Gentoos. There, we got to see many groups of adults returning from sea only to be chased back in by their waiting chicks.

All too soon, it was time to leave. We waded into the water and cleaned our boots using a portable boot scraper the staff had brought from the ship and then boarded the boats back. Back in the mud room, we were given hoses and scrub brushes to finish the job before being walked through a tub of sterilizer. Only then, when our boots were completely clean were we allowed to swipe our card and be officially allowed back on the ship.

Maryanne and I took off our boots and parkas and left the mud room just as the staff were arriving in the last boat with everything they had taken ashore, By the time we made it to the lounge two levels up, Expedition’s enormous chain could be seen and heard feeding over the windlass and down the hawsepipe. Our next stop was far away and the ship was to sail all night through open water to get there. The crew were already handing out hors d’oeuvres and champagne in advance of the night’s briefing.

Antarctica can have some very rough weather and it can change very quickly. Weather stations are few and very far between and forecasts can be unreliable. Because of this, Expedition has no fixed itinerary. The bridge crew and the expedition leader confer every day to decide what the next course of action will be. It wasn’t until the evening briefing that we would find out what was going to be the ship’s most likely destination for the next day.

It had been decided to next take the ship to Neko Harbour on the mainland. Alex, the expedition leader referred to it as “Downtown Antarctica”. He gave us the dos and don’ts, which tantalizingly included info on crevasses and what to do if you hear calving nearby. He then handed the floor over to the Captain, Sergey Nesterov.

Captain Nesterov is a big, shy man who seems more comfortable on the bridge poring over charts than making speeches to big crowds in English. In a thick Russian accent, he introduced himself and the leaders of each department. He gave special praise to Engineering, who had just installed brand new engines earlier in the year. The new engines and the unusually smooth passage across the Drake allowed the ship to arrive almost a day earlier than usual, giving us a whole bonus day. In twenty years and over four hundred crossings, he said it was the fastest he had ever made the trip. He then welcomed us to Antarctica, raised his glass and bid us “Na Zdorovie!”

The dining room at dinner was full of chatter as everyone compared their days to each others over yet another sumptuous meal.

Just as the dessert was finishing, an announcement came over the PA about Expedition being surrounded by Humpbacks. We all left our food and went on deck in the cold to see, even though most of us were no longer dressed for it. The Bridge abandoned their course, slowed down, and maneuvered this way and that to give us all the best view. They indulged us until it was too dark to see and we had all retreated into the big, warm ship. The engine noise increased and we resumed our SSW course to the Antarctic Peninsula.

Maryanne and I were still surprisingly awake, so we headed to the Polar Bear Bar. (Polar Bear? Expedition heads to the Arctic for the northern summer) We had some rough wine and a game of darts. I had that feeling again. Here we were in Antarctica at sixty-something degrees south, going even more south, and we were in a pub playing a game of darts. Life can seem very strange.

It was a pretty close game, but Maryanne beat me at the end with a really nice throw.

I couldn't get the penguin video to work--Argghh. You will have to play it for me next time I see you. Do you think the Penguins would ever cease to be amazing and amusing, even if you were there all the time? I don't think so. They are incredible creatures...
Maryanne as Darts Champ! Why does this not surprise me?
Sending love

I love that penguin video! The chicks are just so rolly-polly, and the fact they're so curious and came over to you, wow - I never thought about that. But of course they're completely unfamiliar with humans so they're not afraid.