[Kyle]After steaming NNE all night in a long, slow swell, Expedition arrived at the volcanic caldera of Deception Island at first light. The beautiful sunny weather of the previous day had given way to low clouds and drizzle for our arrival. Expedition headed toward the cliffs at the narrow entrance, known as Neptune's Bellows, and then made a hard turn to enter the inside of the crater.

Deception was apparently named so because it would seem by looking at a chart that the anchorage would be well protected from all sides. However, rough conditions frequently occur inside caused by high winds funneling over the passes.

For us, the winds were light both inside and outside the rim of the crater, so the anchorage at Whaler's Bay just inside the entrance was flat calm.

Plenty of evidence of its whaling past remains at Deception Island

We boarded the zodiacs and were deposited onto the black beach at the ruins of the old whaling station. The metal structures were being slowly broken down by rust and covered in volcanic ash. Like many places we've seen, once whaling was no longer being done, the station was repurposed as a scientific research base. This one was named Port Foster. It was abandoned during the volcano's last eruption in 1960, when it was partially submerged in flowing ash.

Now Port Foster is home to a large population of fur seals who have taken up residence along the beach. Maryanne and I had to weave through them as we made our way to the lookout at a spot called Neptune's Window. Apparently it is possible on a REALLY clear day to see all of the way across Bransfield Strait to the Antarctic peninsula from there. 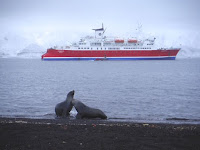 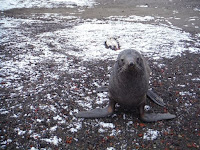 Along with plenty of bullish Fur Seals

The seals were very aggressive and territorial. The recommended procedure when charged by one was to raise an arm to look bigger, make a lot of noise and back away slowly. This was sometimes difficult to do when they would keep coming. Those seals are bigger than we are and they have a lot of teeth, They are also surprisingly fast. We were told turning and running would make them break into a full gallop, which we would not escape, so our only option became stand our ground and look mean. Well, this will be good training for bear country.

We had to go through this process a dozen or more times before we finally made it to the other side. There we started climbing the crater rim to the lookout.

Not only was the peninsula not visible from Neptune's Window in the poor visibility, we also couldn't see most of the rest of the Deception Island. The black volcanic ground added to the effect and on that day Whaler's Bay seemed like a bleak place, indeed.

We descended back to the beach and ran the seal gauntlet one more time to get to the remains of the buildings damaged by the eruption. There we poked through buildings with rooms half buried in dust.

When we got back to the zodiacs, we must have been overheating because most of us dropped our parkas onto the beach to use as mats and then pulled off all of our layers but one (some didn't even stop there). Since Deception Island is an active volcano, some of the water at the beach is heated, so we took the opportunity to have a "swim".

Saying the water is heated is like saying Saturn is heated, which I suppose it is, compared to Neptune. In reality, BOTH are super cold. The water on the beach at Whaler's Bay has a layer about a millimeter thick at the surface that's a couple degrees warmer than the water below, which is at freezing. Splashing down the beach, it is not possible to feel any hint of this layer.

Maryanne and I ran in hand-in-hand until we were in water about thigh deep. This was deep enough to do a face plant that would allow us to completely submerge, then we dove in.

The bottom there must have been some sort of trampoline mat because we popped back out of the water faster than we went in. HO-LEE crap that water is cold!! Once we were done screaming expletives, we high-tailed it back to the beach, where we were handed a nice, dry towel. We had completed the Polar Plunge.

The volcanic activity provides for slightly warmer water
(so they say!)

Since there was no wind to speak of, it wasn't actually that bad once we were mostly dry. Getting all of those layers back on for the ride back to the ship was some work, though.

We headed back to our cabins for hot showers (to get the sand off, of course) and then headed to yet another giant lunch. Expedition pulled up anchor and threaded her way back out the entrance, leaving the seals to go back to charging at each other.