[Kyle]The sound of ice scraping against the hull by our berth woke us from our slumber. A look out of our window revealed a berg with a visible part nearly the size of the ship and certainly much more massive. Expedition is categorized as an ice reinforced ship. I know that meant the hull was in no danger, but I wasn't sure which kind of modifications are done to allow the rudders and props to deal with the kind of point loading I could imagine was going on beneath us. No bother. I'm sure the crew is aware of it, but now I'm up.

We were in Paradise Harbour, named so by whalers because it offers excellent protection from the weather.

I went through my usual routine of going upstairs to grab some coffee and then headed outside to have a look. The wind was gone and big, fluffy flakes were falling straight down and covering the decks. The water was so cold that the snow didn't melt when it hit, instead turning into a layer of slush that covered the harbor.

A very atmospheric start to the day

Following breakfast, we went ashore to the Argentine base Almirante Brown, which was unoccupied. They are only staffed for a couple of months a year to repair winter damage. There were a few gentoos around as well as a lot of Blue-eyed Shags, who use the snow-free cliffs to breed. 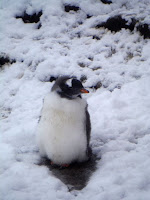 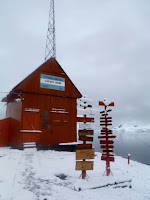 Landing at the unoccupied Argentine base: Almirante Brown

I immediately set to climbing the big hill behind the base. Maryanne started with me, but gave up when she realized getting back down the steep slope would be a little treacherous. The snow was very deep and after a short distance of sinking to our thighs at every step, everybody climbing was peeling off as many layers as they could to keep from overheating.

The viewpoint at the top was backed by a steep cliff and there was only enough room for four or five of us to kneel and look over the edge before we had to make room for the next few. As always, the addition of a little bit of height made the views amazing. The climb was totally worth the effort.

It was tempting to lie down and let gravity do the work of getting back down since there was a nice level patch at the bottom upon which to slide to a stop. Our guides advised against it, though, on the basis that it compacts and smooths the snow, which destroys the footholds the group going up desperately needs. There were also crevasses on both sides of the path. That made getting down more difficult than going up, although at least it was less strenuous. One last group of hold-outs did stay up there until the very end so they could slide down. It looked like a lot of fun.

I was already back down at the base by then, reunited with Maryanne. We poked around a bit, taking photos of the base and enjoying the penguins.

Across the harbor, we could hear the Captain on the ship's loudspeakers calling out various orders to this group of crew or that. I thought they may have decided to do something about the big iceberg, but it turned out they were using our time ashore to run emergency drills. 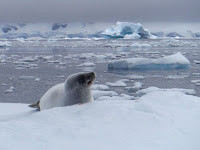 Exploring the ice in the amazingly still waters of Skontorp Cove

On the way back to Expedition in the zodiacs, we took the long way as a cruise of the harbor. This gave us a much better look at the nesting colonies on the cliff sides as well as some time along the calving face and amongst the bergs, some of which had lounging seals.