[Kyle]We had planned to spend another whole day in Buenos Aires. After checking the flights back home, however, it became clear that our options were quickly drying up. Our choice ended up being between waiting at least four more days, hoping the remaining standby seats didn't dry up during that time, or leaving a day early, and only if we bought confirmed tickets on another carrier.

Maryanne had promised her work that she would be back in two days (on the Monday), so we decided to suck it up and buy the tickets. {Maryanne: We'd also managed to lose our only working ATM card, and while credit cards can be use in stores and restaurants, taxis, and almost every other activity was a cash only business - we didn't have enough cash to go to the airport more than once.}

The flight didn't leave until evening. We had spent a big chunk of time that morning trying to figure out a way to get home, so our full day plan was both shortened and sped up so that we could fit as much in as possible. 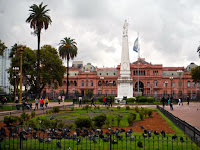 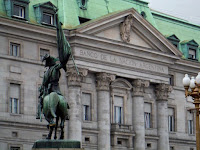 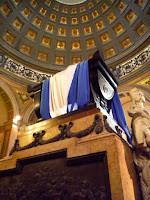 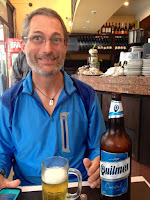 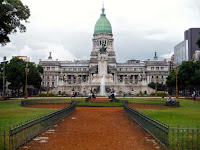 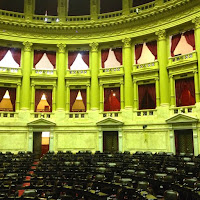 We started by heading to Playa de Mayo, home of the Presidential Palace. It turned out to be closed for tours, so we headed across town on foot, ducking and weaving through the crowds along the way.

Our new goal was the City Hall and the Congress building. We arrived at the latter just in time for the Spanish version of the guided tour. English was in an hour. We had no time for that, so we went with Spanish. We were able to get the gist, although our guide lost us a bit when she started going into detail about the specifics of their parliamentary procedure.

It was a pretty long tour. By the time we were done, we realized we were going to practically have to run back to our hotel to make it there in time for our ride to the airport. We started off zigzagging our way along the shortest route we could take. A few blocks in, we spotted an empty cab and flagged him down.

Because of the nature of the one-way road system, our taxi had to take a much longer route than we had been using on foot. We were still ahead of the game until a couple of blocks before our hotel, however, when every school in the city seemed to let out all at once. Traffic slowed to a crawl. We kept going back and forth between thinking it would be faster to just bail out and run or faster to stay in the cab.

We decided to stay and ended up pulling up to the hotel with five minutes to get up to our room, grab our stuff and check out. We had allowed plenty of extra time for rush hour traffic on the way to the airport, so once we were back downstairs and in THAT cab, we could finally wind down and take a breath.

After three exhausting flights getting back to San Francisco taking the long way, we were both relieved to be finally home and glad that we had an extra whole day to recover. We ended up sleeping through most of it.