[Kyle]I would have loved to stay and linger longer in Agde, but my work schedule wouldn’t allow it, so we had to move on immediately. It’s one of my great frustrations with my job. I never seem to have the time to really explore so many of the places we go properly. {Maryanne: er.. Kyle... I don't think you are going to get much sympathy here}.

After a long commute I arrived home to dinner waiting for me, and after allowing ourselves the luxury of desert from one of the local glace stands we headed out to sea. 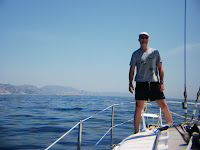 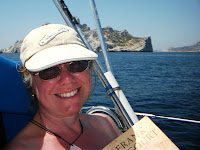 An easy passage
The trip was quite uneventful for the first few hours; a tramontane was blowing (a strong cold wind from the North) providing favourable point of sail for our East-bound passage. The full severity of the tramontane took a while to build and we sailed half the night at walking pace with the screacher (our light wind sail) up. Once passed the delta of the mighty Rhone the winds picked up further and we gained speed for a few hours, until they eventually died again for the morning.

I hadn’t had much sleep at work, nor on the commute, Maryanne and I eschewed strict watch keeping for such a short passage, and decided to just sail until we were each tired and swap about as we needed to. I was doing surprisingly well for most of the night but fatigue finally hit me just after sunrise and Maryanne was kind enough to let me sleep until noon. When I awoke the wind was mostly gone and the coast showed dramatic tan coloured cliffs topped with scrubby pines.

I had been hoping for a fast passage because even though I only had a couple of days off, I really wanted to stop at the calanques (geos or mini-fjords) just to the South of Marseille. Calanque d’En Vau and Port Pin were the first two we explored. I had originally hoped to anchor in the tiny but beautiful Calanque d’En Vau with it’s majestic rock formations and high cliffs, but it turned out to be crowded with day trippers and we were not sure we could take the room we needed. We continued on to Port Pin (the next calanque), which was less dramatic, but still pretty; same thing. 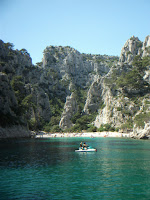 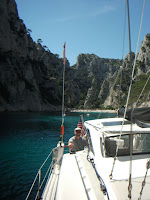 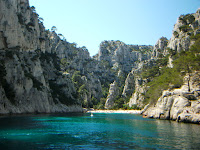 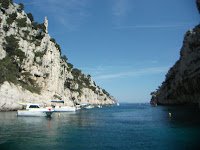 Calanque d'En Vau - stunning
Around the following corner at Port Miou, this calanque provided plenty of available moorings on the outside of the harbor and picked one up. Due to the limited room in the calanque moorings are for attaching bow lines, while stern lines are then led to pendants or rings on the cliff face ashore. We found a spare mooring and attached our bridle at the bow and I donned snorkel and fins to swim the stern line ashore to the ring and back. No sooner had I completed this laborious process then the port captain showed up and told us to move due to the cliff divers above us. We unhooked everything, moved to our advised mooring and just as I’d completed swimming and attaching the stern line, he asked us to move to a different shore side ring… Oh sure, no problem! He then charged Maryanne 12€50 for the privilege; we were a little bristled since it was free just around the corner, and we weren’t sure we were getting much for our money, but after all the moving agreed. As I was tidying up the lines, he returned and apologized for under-charging us, we needed to pay 19€ since we were a catamaran! Maryanne attempted to negotiate but he wasn’t having any of it! In an attempt to find out if there were any additional services, we were told we could top up with water (which we didn’t need) at the dock – a hollow victory. {Maryanne: Most of our frustration was not really the price, but our hot off the press guidebook had given us an expectation of about €5 to pay, so the difference was an unexpected shock, also this was the first time we'd used this method of mooring, and with all the forced moves we did it 3 times - it wasn't seeming such a tranquil spot at the time the guy asked for the money!}. But it was still a beautiful anchorage to be and we had no energy to fight or move. Since I already had mask and fins on, Maryanne suggested I go ashore and explore while she secured the boat and completed the end of passage check list.

The mooring field is quite deep (6-10m), and there wasn’t much sea-life within the first meter or so of the surface, but deeper there were plenty of fish and anemones, starfish etc. It was so nice to feel comfortable swimming in the water the boat was floating in again; warm (enough) and clean.. I used the opportunity to check out Footprint’s bottom, the canal hadn’t been too hard on us, but she had a few scrapes all the way through the bottom paint on the starboard bow and rudder (the side nearest the shallow bank we had to hug when passing other boaters).

At that point I was happy to climb aboard for the evening when Maryanne asked if I wanted her to put the camera in the underwater case. “Why would I need to do that?” I pondered. Then I realized I could swim ashore and get pictures from the top of the cliffs, once that idea was in my head there was no getting it out. She tied some shoes, a hat and the camera in its underwater case all to a line and off I went, towing it behind me to shore. It took me quite a while to find a spot to climb out, but in no time I was walking both on and off the cliff top path, enjoying the perspective. 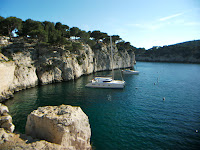 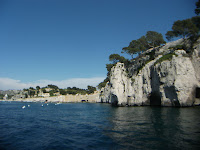 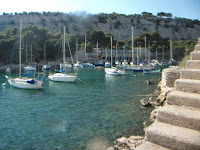 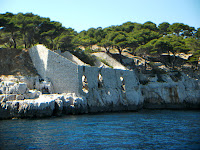 Exploring Port Miou Calanque
Returning to the area I’d come ashore, I passed the cliff diving sites, where high divers had earlier been plunging in. There was an inscription chiseled into the rock, in French, indicating the site is used by the local high-diving school (the French word for diving is plongee, which I like very much.). It occurred to me that If I could get up the courage to jump, I’d have a shortcut back to the boat saving both a walk and a swim. After standing at one of the jump sites, thinking about it for a while from the 10m jump, I threw my fins, mask and camera down below, effectively committing myself to the jump. I did it, landing in the water behind Footprint. Wow! 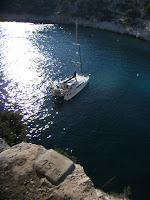 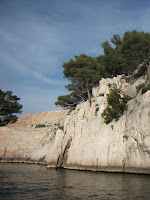 See Kyle Jump... can you? Picture to the right
When I surfaced, proud and smug from the adrenaline rush of survival, I was surprised to find my belongings nowhere in sight; they must have sunk and I'd be in trouble! At the boat Maryanne watched on, and provided her snorkelling gear and a boat hook for me to search and recover our treasure (or else!). Everything had settled about half way down a slope at about 5-6m of water and I was just able to recover it (Whew!). Maryanne was particularly concerned that our underwater case was only rated to 5m and this screw up had put it below that for some time. Luckily I recovered everything and the camera was fine. Lesson learned – fins don’t float (oops).

Once Maryanne was safely in possession of the camera I decided to return to repeat my dive allowing it to be captured for posterity’s sake, this time leaving all my kit behind on the boat.

It was far to short of a day and we knew we had to leave in the darkness of very early morning, but Maryanne had a surprise for me when I got back. She had located some rum agricole (which I’d failed to find in the stores earlier) and surprised me with a proper ‘ti’punch; a perfect ending to the day.
Posted by SV-Footprint at 10:28:00 PM

wow! that was a steep cliff to jump off of, kudos on doing it TWICE! and very happy to read you recovered your kit. a lovely place, and lovely that you got to stop and explore it. (except for being overcharged for your mooring. that really does seem like a scam.)

WOW!! Thanks for the photos - that area is unbelievable!