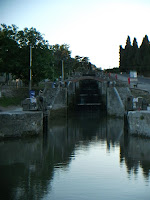 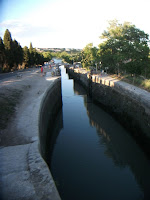 The 7 lock staircase at Beziers
[Kyle]About five minutes before 8:00am, a big rental boat came charging past us from up the canal toward the locks, throwing us into the bank. Knowing there were several boats waiting to go through and not wanting to miss our chance, we made our hasty departure.

At the top of the lock, we learned that the boat was a crewed charter and that the locks weren’t opening until 8:30. Our guidebook (which is new) is so outdated. Nothing had happened by 9:00, so one of the crew from the other boat went to check out what was going on. She came back and shouted to us that the lock-keepers were on strike today. Oh, you have got to be kidding me!

By then, there was a pretty big backlog of boats wanting to go through. Our spot on the bank had been taken. We asked a British couple if we could raft up to their barge for the day and they kindly obliged. We went down to try to find out something about it first hand, but just encountered closed doors.

Resigned, we went back to the boat where Maryanne called the place we hoped to have the mast stepped to make sure there would be no delays. All of my buffer time was gone. She’s getting pretty good at French. She got us booked in first thing in the morning on the last day I had available (hoping we would make it). He asked her all kinds of questions about the boat and she handled it very competently. I can hardly follow her French any more.

Maryanne went to double-check the locking times and came back to report that they were filling the locks and she had seen a lock-keeper. She called to him across the lock and asked if they were working today. “Oui.” Came the response accompanied by a look that said, “Why wouldn’t we be?”

Because you weren’t there two hours ago, that’s why! He told her they they were starting the down-lock process at 11:30 today. Okay….

At 11:30, we took up a position nearer the lock. Nothing happened. Then we noticed the boats coming up-lock. Oh, you have got to be kidding me again!!

We tied to a ring and a piece of a bar sticking out of a cliff and sat back for the show. A rental boat with a party crowd came up from behind, realized he was out of room and attempted to turn around with the usual too much power. He was hitting everything. It took all of my strength to keep them from stripping the dinghy off. Everybody was yelling “Slow down! Ralentissez!”

Realizing we weren’t going anywhere until the post-lunch down cycle, we had a big lunch and watched the show, occasionally getting up to fend someone off that strayed into us. Our favourite was the drunken guy in the gift store captain’s hat with the crew in matching t-shirts. In addition to the usual bumbling, he made a point of saluting everybody he saw, while his crew toasted everyone.

Finally, our turn came to go down. We shared the lock with the guy who had blasted past us first thing and a very pushy German who forced his way to the front of the line after taking the commercial dock for himself for the wait.

The impatient lock-keepers started draining as soon as we cleared the doors. By the time I had my line sorted out, the boat was too low to jump aboard. There were no ladders. We tagged off and now Maryanne was Captain. It’s good to have someone aboard who knows what she’s doing.

When that locking was through, the German used his boat to push the charter boat out of the way so he could be first. During the emptying of the lock, his boat moved backwards as ours moved forwards and the tip of our mast made contact with his flag. It didn’t break the pole or anything, just brushed the flag. It must be considered some kind of act of war for an American boat to touch a German flag, because he removed his flag and gave us the stink-eye for the rest of the Foncérannes locks, and the two after. 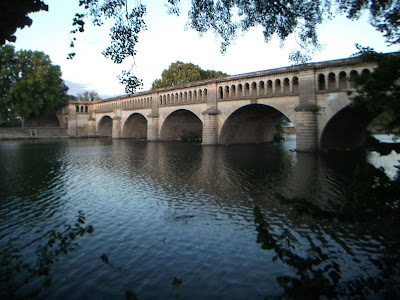 Leaving Beziers
We got left behind on subsequent smaller locks, which allowed the party boat to catch up, requiring lots of panicky fending until they peeled off somewhere to do some partying. 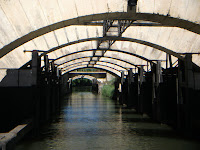 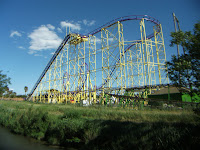 Flood protection and thrill rides on route
After a few hours, In spite of the very late start, we arrived at Agde, the last lock before we leave the canal and head back to sea. We arrived after the last locking in our direction, so we headed out to see the town. I don’t know that I was really expecting much of Agde. A had only seen it on a map as a series of road lines and blotches for populated areas or parks. It turned out to be just wonderful. The city was founded by the Greeks 2700 years ago and looks every bit of it. Most of the streets were narrow enough that I could almost touch both sides at the same time and were organized in an incomprehensible rabbit’s warren. Things were crumbly in that agreeable French way. Maryanne called it derelict chic (Dérélicte! – That’s for you, Kate). We found a restaurant (with amazing pizza!) that offered free unlimited wifi on the way home and camped out for the evening. 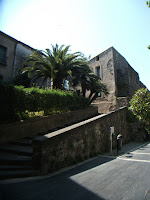 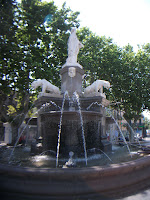 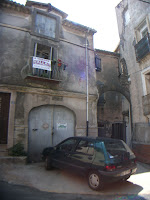 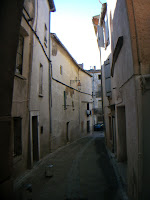 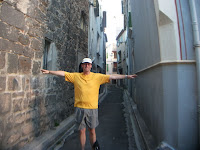 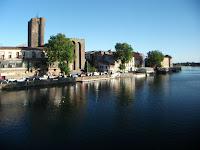 I would be scared to death to drive a car down one of those streets. Aren't horses fatter than that?
As usual, I logged in to enjoy reading the blog, thinking I would spend the last 15 minutes of sleepy time stowing away, at least mentally, on your adventures. 90 minutes later, I am having an awful time tearing myself away even though I can barely keep my tired eyes open.
I really missed this during that long, dark winter.

I wish everyone who reads your blog would sign in and say Hi just once in a while so you can see them peeking from behind the curtains. Hello Everyone!