[Kyle]The alarm clock chirped at 2:30am. We ran through all our pre-departure checks and left the marina just shy of 4am. It was completely dark, but we managed to survive the currents and channels, and daylight soon arrived. It was a rather nice trip. The Gironde split into two tributaries; the one we took was the Garonne, and apart from a couple of ships also making use of the flood tide, we had the river to ourselves.

As the sun came up we were passing through the industrial loading docks on the outskirts of Bordeaux. Shortly after sunrise we passed the majestic buildings of Bordeaux’s city center. Away from the center it was very ugly, industrial - the usual city stuff - and unfortunately there was nowhere ‘nice’ to tie up to – so we felt less bad for missing it and sailing by. 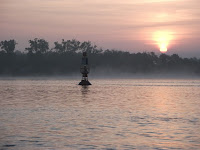 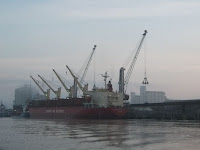 An early start, tranquillity and commerce on route
The biggest memory of Bordeaux for us was passing through the spans of the bridge ‘Pont de Pierre’. This is a beautiful, multi-arched, stone bridge and the first that required the mast down for safe passage to get under. We arrived at maximum flood current and found the water pushing at the span supports and creating its own wave systems. Our anxiety increased as we approached. First of all we’ve had many years of conditioning as sailors of looking at low bridges and being unsure that we could really get under (despite the charts indicating we could, it often just doesn’t look like we can until you are already committed). Secondly, the current was carrying us towards the bridge much faster than we were capable of reversing against it. Our only choice might be a 180 degree turn started way before the bridge to give room for a safe exit (but then where would we go?). By the time we were close enough to the bridge to see the enormous current, it was too late to back out – all we could do was steer a straight line and trust the charts. As we rushed towards our chosen (recommended) archway, we could clearly see the water the other side was lower than the water we were in. As we approached the near side, Footprint pitched forward and was accelerated through the log flume ride of the archway; splashing down on the other side. That will surely wake you up! 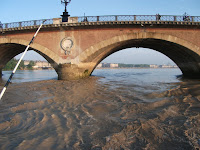 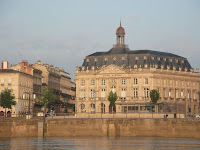 Bordeaux, picturesque and what a ride!
Eventually Bordeaux center gave way to industrial Bordeaux, and then to countryside as the river narrowed to become an intimate, cozy, rural idyll. Alongside the river we noted campgrounds and holiday homes. Houses with private docks, etc, but the most intriguing feature was the fishing hut - a platform of varying sturdiness, atop posts way out into the river, and with various pulleys and systems suspending a large cone of fishing net. Occasionally we’d see one in use where the fisherman would wind the system up and down using his hands on a bicycle pedal like system. We’ve no idea what fish they sought (and presumably caught) but these shacks and men-caves were common, fighting for space among each other on the shore line and we found them fascinating (at one point we discovered a fleet of rickety looking small fishing boats with the same net system – presumably for those folks that could not secure the water front land required to build their own shack). 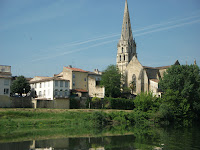 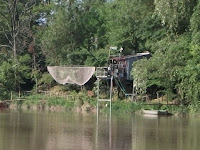 Villages and fishing nets on route
We were enjoying the tranquil pass through French countryside when we rounded a bend in the river hit a fog bank. At first I hoped it was just an isolated patch of low visibility, but it turned into an hour of wheel gripping terror. Visibility decreased to a point we could not see the sides of the narrow river, and so low that it was difficult to see debris passing in the water in sufficient time to avoid it, despite our enforced low speed - all adding to the stress. Every now and then one bank or the other would appear out of the fog and we’d use the compass to ensure we didn’t over-steer back into the other bank (the Chartplotter and GPS were also, obviously, a great help); It was perfect conditions for the radar, but this was connected to the unstepped mast, and no longer wired to the boat, as was our automatic horn (we had to resort to a manual compressed air horn). I was very relieved when the fog finally started to ease, both banks again visible, and a few minutes later we were back in glorious sunshine again.

We were feeling very pleased with ourselves having made the best of the tide, looking forward to entering the canal by noon, when the engine sped up and the boat lost power; yikes! We opened up the transmission cover and could clearly see the drivetrain slowing down, indicating that the transmission as disengaging. By reducing the load on the engine we were able to nervously get it back under control, but as the day wore on the slipping occurred at lower and lower power. After much diagnosis, it seems our most likely candidate for a cause was the transmission compartment is improperly ventilated and after several hours of use at normal power begins to overheat, and struggle. I suspect that the installation was never intended for continuous sustained motoring, but without a mast we have little choice.

Since then we have adopted a scheme of gradually reducing the maximum power we expect from the transmission as the day progresses, and so far this seems to be working (no repeats of the problem when we have applied this policy, repeats when we don’t). Of course, all of the stopping the boat in the middle of the river to open compartments and diagnose problems caused us to lose out on our good current on the way to the canal entrance. We approached Castets into an increasingly strong current, which increased our stress levels wondering ‘what if the engine fails now? What is our plan?’ It was with much relief hat we finally arrived in Castets-en-Dorthe, and the entrance to the Canal around 12:30.

Being 12:30 we were not too concerned to find the entrance control traffic lights off (the lock keepers need to take their lunch break), but by 2pm they were still off, and we received no response from our radio calls nor our telephone calls. Eventually I dropped Maryanne off at the landing dock (no mooring allowed) for her to investigate. The office appeared abandoned, and was full of signs of the strike; could it be the strike was still on? Eventually we decided to flaunt the rules and tie up to the landing stage so we could both explore. In our broken French we managed to establish that they were not on strike, but we needed to call someone. There was no response from the intercom system by the door, and none from our phone calls either – eventually our phone credit ran out. Maryanne had purchased extra credit when she bought the SIM card, but had been unable to understand the menu options and actually add the credit. We sought help from a friendly local (again in French), but they too could not establish how to add the credit, but did tell us that we needed to call a freephone support number from a land-line (nearest one in town a couple of miles away at the post office). We had to leave our temporary location as the tide changed, so we moved to a different dock, but then had no access to shore… Hmmm. We conceded defeat and settled in for the night, hoping to start the process again the following morning. Castets, and the châteaux that stands at the entrance
No-worries, time to open the wine we’d bought in Pauillac and use Maryanne’s new glasses, a leaving gift from her work in Manchester.
Posted by SV-Footprint at 4:10:00 PM

Are you using regular motor oil in your transmission?
If so here's a post about the problem:

--- In Gemini_Cats@yahoogroups.com, "Michael" wrote:
>
> I'm sure this must have been talked about before, and probably beat to death,
but why does the PCI manual say to use 10w30 and the Westerbeke book says to use
ATF? ..and which is correct? Mike "Seahorse" 1051 Mc
>

These transmissions use wet multi-plate clutches that are immersed in the oil,
exactly like the ones in most motorcycles.
The problem is that after the original manual was written, all US automotive engine
oils were a few years ago required to have "Friction Modifiers" added to them to
improve fuel economy. These are extremely slippery, too slippery for wet
clutches to grip properly. Motorcycles have to use special Four Stroke Oil
without these additives so their clutches won't slip.

A very good synthetic version that I use is Royal Purple Synchromax:

You only need one quart, and one as a spare. It should last indefinitely.
I drained it from the dipstick hole with a oil drain hand pump plastic
tube,trying to get every nook and cranny I could reach, I think I got more of
the old oil out that way than by pulling the barely reachable drain plug. Much
easier and cleaner this way also.

If you can't find Royal Purple in France just go to a motorcycle dealer for some four stroke transmission oil, preferably full synthetic. Bel-Ray is a good brand.

Hi John.. Thanks for the comments. Our transmission does use ATF (not oil), and I'll have Kyle look into your suggestions :-)

If that's the case you clutch plates are probably glazed and need to be replaced, unfortunately.
Replace the spring plates at the same time.

Look for an old tractor mechanic, that's where the transmissions look like they come from.......

Another less likely possibility is that your shift linkage is out of adjustment, leaving the clutch slightly disengaged when in gear. One arm goes to the shifter fork and one to the clutch. You will still need new clutch plates if they have been slipping that much.
This would take someone who is very familiar with this to adjust correctly, I haven't dared touch mine.