Selling our souls to the Wifi Devil

[Kyle]We deliberately delayed our start to the day in order to await the opening of the port office to complete our clamouring Internet needs, expecting not to be delayed much more than half an hour. Of course the office didn’t open on time, then there were more pressing priorities for the captain that didn’t include turning on the internet for us, eventually it was concluded the internet didn’t work and it sometimes was just like that in the mornings… Doh! We’d wasted 2 hours. The port captain knew of no other place locally we could expect to find Internet, so Maryanne suggested McDonalds (certainly all British McDonald's have internet, but I wasn’t sure of the French ones).. “Oui, Oui, definitely”, was the response.

So with our hand held GPS we set off to find the local McDonald's which was only 1.5 km away, however being on the opposite side of the canal with no conveniently placed bridges we’d need to walk 4.5km each way. Our day was disappearing in admin. I of course detested the idea of using McDonald's for anything (this year will be the 30th of my personal boycott and I’m convinced that the loss of my valuable business will be bringing them to their knees shortly). We’d attempted several short-cuts, but all dead-ended and resulted in us just needing to walk further, so we eventually resigned ourselves to the full distance. Along the way we checked for wifi signals, and passing one of the chain of Lidotel(s), finally found one for 3€ after about 2km of walking. Expect your local McDonald's to be closing soon! I was able to book my train ticket and put in my June bid for work, Maryanne caught up a little on banking, but we didn’t want to spend too much time, so after all the critical internet work was complete, we headed off back to the boat.

This time we avoided any ‘short-cuts’ and walked via the direct route along the canal/cycle path, inspecting the barges tied up alongside. From the shore the barges seemed even more curious. While not officially sanctioned by the authorities, barges are allowed to remain moored provided they can be moved if there is any need for maintenance along the bank. Many of them appeared to have a permanent plot with flowers planted, fencing, tool sheds, BBQs etc. installed on the bank. There was a jury rigged electrical system running through the trees that fed power to more or less all the boats, some even had water hookups, and at the end of each section there was even mail boxes. This all seemed beyond the ‘we won’t bother you if you don’t cause any trouble’ attitude by the authorities and well into acceptance of being a neighbourhood in its own right. At the end of the walk I had so many questions for the peniche owners (was their power metered? Did they have an address?).

We eventually arrived at the marina and discovered instantly that the wifi was back on! We could have stayed and waited, but we were too unsure to take the chance. We finally cast off about 12:30, and would have ideally left around 8:30. Such is life. 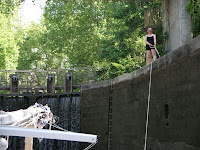 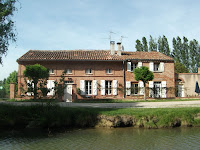 Our first lock of the day was a double one at Castanet. From our direction Castanet represents the first of the original 17th century oval shaped canal du midi locks (the others to this point were more modern upgrades).

This was also the first we expected (perhaps) our instructions would be good for. I would need to drop off Maryanne somewhere conveniently on the canal before the lock and she would have to make her way to the lock and press the buttons to adjust the water level and open the doors to let me in. She disappeared for a while, a bit too long, and eventually returned having decided that the automatic lock was closed for lunch (motors need a break too!). This confused us since the automated locks on the canal de Garonne hadn’t closed for lunch, but this was the only obvious explanation. At 1:30 a lock keeper arrived to press his own buttons and the gates opened. 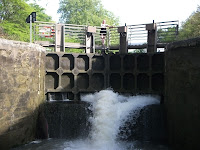 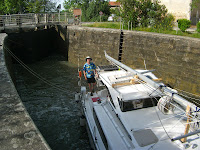 Coming from rectangular locks the oval ones were quite daunting to us, the curved sides meant the corners of the boat would take the impact of any mistakes and sharp turns are required into the lock to make it in and out of the narrow entrances, Because the locks also had greater volume for their length, they took longer to fill, and the swirling pattern of the water was very different. The one upside was the diffusion caused by the widening lock seemed to reduce turbulence significantly at the back while filling with water. It was quite stressful and for the first few of these locks there was a little yelling between us as we each ‘assumed’ the other was doing something they knew nothing about.

That same trip, we finally found a lock that seemed to (on some level) represent our instruction pamphlet, but the doors would not close. Maryanne called on the intercom system for help (in French, so very basic) and thought that they guy was coming to fix it, but wasn’t 100% sure of his side of the conversation. 10 minutes later he arrived and went through of a process of pressing buttons in various locations all to no avail, about an hour later we finally exited that lock, glad of the help to hand. 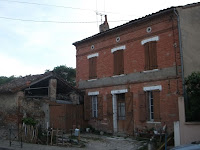 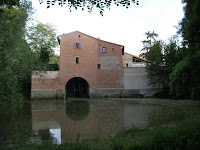 Eventually we felt that we were getting used to the locks, remind ourselves that we love each other, and that we were a team, and even had time to enjoy the view of the Canal Chapel at one. When we finally made it to the end of the line for the day, we were glad to crack open a couple of quality German beers that our friend from Preston, Klaus, had given us before we left – cheers to the end of a stressful day!
Posted by SV-Footprint at 3:07:00 PM

stressful or not, at least you were both attired in "retirement garb"! maryanne in her shorts and kyle in his hawaiian shirt :) and you are, without a doubt, a marvelous team!