STILL not impressing any canal experts! 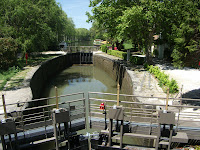 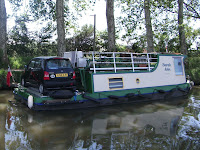 Oh, if only we could have brought the car!
[Kyle][Maryanne] The day started with a double lock, which the lock keeper filled way too fast to be comfortable. The speed wheel on the boat was measuring about 4kt as she filled the lock and we struggled to keep the boat from hitting the opposite walls. She showed no concern and made no effort to help us, nor slow the flow, and at the same time seemed to be arguing with her boss who had arrived for some reason. Neither of them seemed interested in our struggles.

[Kyle]While trying to keep the boat straight in the heavy flow, the stern wondered over to the other side and caught a back eddy, pulling harder than I could resist. I leaned over further and further until I ended up on my butt being dragged helplessly towards the bollard, where I planted both feet and tried to keep from letting go of the line. At other places we have been, like the Scottish locks, if such a problem had arisen the keeper would have quickly closed the sluices to reduce the water flow and calm things down until all was again under control. I was desperately hoping she would do the same thing but she stood stone faced the whole time – not her problem I guess! Eventually I knew my only hope for relief would come when the lock was closed to full and the flow slowed down naturally. I wasn’t sure I could hold out that long and called to Maryanne for help, although she was also struggling, she mercifully managed to help take some of the strain and gain a better angle on the lines to secure the boat.

The next lock was also a lady keeper, and was tranquil and easy, and there was lots of offers to help to take lines and generally chat to us. Chalk and cheese!, as Maryanne says. 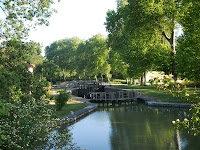 It was this day we reached the peak of the canal altitude and we exited our last up lock (the Ocean lock), followed a tranquil stretch of water, and then entered our first down lock (the Mediterranean lock)… Oh how we appreciated the down locks, there are the same problems of entering, but there seem to be no real currents or eddies as the water empties, and it is an easy, relaxing process without any of the stress we’d had in many of the earlier up locks. And it’s down hill all the way from here!

The weather was clear and sunny, almost too hot (mid 30’s C all day, and no shade at all once we left the cockpit).

We were starting to notice some strange engine noises (exhaust noises actually) and although the boat seemed to be performing at normal speed, no overheating or signs of trouble from the gauges, the water outflow wasn’t as strong as we were used to. We started mentally considering what the problem might be while I kept an eye on the temperature gauge to be sure.

The highlight of the day was to be Castlenaudry, a beautiful town where we planned to spend a couple of hours wondering about and also getting groceries and fuel (fuel is very difficult to find on the canal). Naturally we couldn’t find the fuel station mentioned in our guidebook (we hadn’t realized it was so out of date when we purchased it), and we eventually tied up on the town wall anyway to be told the fuel station was long closed, and we couldn’t stay at this dock. We snapped some pictures. Performed a quick check of the water strainer (empty? That was a surprise) and the impeller (no problem) and moved on. 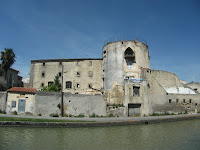 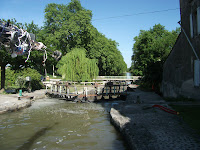 Medieval Castlnaudry
The exit from Castlenaudry requires us to descend a quadruple lock. The green light was on as we rounded the bend, but the lock doors were closed (strange). We tied up the boat again and Maryanne went to investigate. Another chat (in French, we’re getting there) revealed we were waiting for 3 boats to lock up through the 4 locks and then we could go down, but we’d have to hurry there were plenty of other boats waiting to get up. We got the distinct impression that the lock keeper was doing us a favor by letting us down at all.. We amazed ourselves by passing through those 4 locks without a bump, hitch, missed bollard, or issue in just 16 minutes; the doors were being closed on us as we entered, it was a slick operation on our part and that of the lock keeper from his military like control tower. Normally we expect a single lock to take about 20 minutes, we must have broken some record!

There were plenty of places in the canal where the rudders touched bottom and kicked up, and we were very careful only to reverse in the center of the channel, or only when lifting the rudder nearest to the shore (reversing will most certainly break the rudders, which are designed to kick up if they hit the bottom, but only when we are moving forwards). Apart from that, and our concern over the engine cooling water outflow, it was an easy afternoon of the canal and very pretty too. We pondered the problem more about the engine and decided something must be blocking the water intake under the boat, and the only way we knew to clear it was for someone (??) to get in the water and inspect it. Since water was getting through, and no problems were showing on the gauges or with the speed, we decided to leave it until we docked for the night.

I asked for volunteers and Maryanne naturally took a step back, so I reluctantly volunteered myself to take the plunge. I stripped off to my shorts and used the stepladder to descend until I could stand on the bottom. My face made a very ‘o’ shape, and I didn’t have to tell Maryanne that that water was a shock, cold! Eventually I acclimatized. Maryanne ‘helped’ by saying I may as well get on with it so I didn’t have to spend too long in the cold water and handed me some improvised poking and pulling tools. The intake was definitely blocked and I pulled numerous twigs and weeds before finally finding the problem – a big chunk of something that I couldn’t get out.

My attempts to pry the thing lose only seemed to force it further into the hole, so eventually it became necessary for me to give up under the boat, dry off, and work from inside the boat. I disconnected the hose, opened the sea cock to get some back pressure on the offending object and fished around in the flood waters until a piece of wood almost exactly the diameter of the hose popped out like a champagne cork – suddenly letting in a LOT of water, luckily I was right beside the valve handle and could close it off. It is a real testament to the cooling system on the boat that the engine was able to maintain normal temperature with just 20% of the cooling water flow.
Posted by SV-Footprint at 3:22:00 PM

very nice work! glad you cleared the blockage & you're right that it's quite a testament to footprint. and doesn't it feel good to solve those problems on your own? yea!