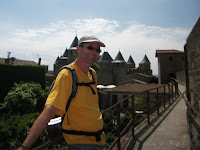 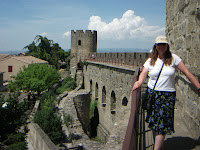 Finally, away from the boat and exploring France!
[Kyle]We had another whole day here. Naturally, we started at the boulangerie and got some walking around food. We then grazed by picking up an item here and an item there until we had all of the ingredients for a picnic in La Cité. Our last purchase was a 1.5l bottle of local wine in a plastic bottle of the type used for water for something like €2. I was worried it might be a bit rough, but all of the wine we’ve had in France has been really nice.

La Cité had a different feel with throngs of tourists in, all buying anything and everything that says Carcasonne on it, but it is still an enthralling place. We bought tickets to explore the inner fortress within the fortress, the Château Comptal, which included access to the outer rampart walls. This was all interesting in its own right, but access to the outer walls meant access to amazing scenery, which we all know I love. 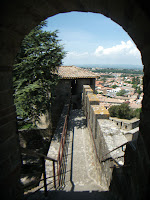 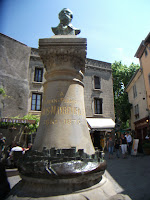 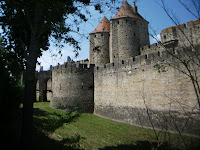 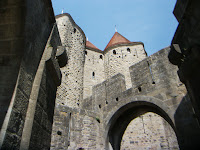 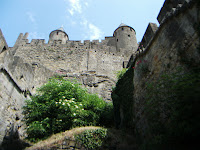 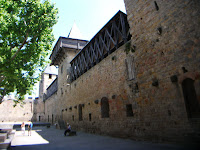 It was hot and we were pretty beat after seeing as much as we could, so we beat a hasty retreat back to the new city. We did some stocking up at both the supermarché and the outdoor market, the latter of which had the best cherries both of us agree we have ever eaten, then we escaped the heat of the worst part of the afternoon with a nice siesta.

We got up in the late afternoon and went trolling around for Internet again, trying every place in town we could think of, but again finding ourselves with no other alternative than darn McDonald’s. When they kicked us out at closing, we took a walk through the nearly empty city to one of the bridges where we could see La Cité all floodlit one last time before returning to the boat.
Posted by SV-Footprint at 3:41:00 PM