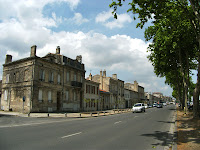 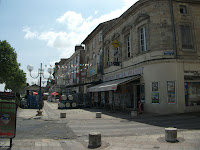 A few shots of Pauillac
[Kyle]By 7:30 in the morning, the Marina was abuzz with activity, and we were only hoping to add to that. We need the mast unstepped for the next leg. We located the port captain (Alain), who could not have been more helpful. He spoke a little English, but in broken French, and we were able to explain our needs to him between our English and French. We needed Immigration clearance (for me, the American), we needed diesel and, most importantly, we needed the mast unstepped – today if at all possible. The marina no longer dispensed fuel at the dock due to lack of business, but the Captain offered to drive us to the petrol station with our jerry cans to fill them there. He called immigration and left messages on two different phones (land line and mobile) but we never did get a call back.

As for the mast un-stepping, we were initially told it could not happen that day due to the tide states, but it was soon agreed we could have it done that evening ‘after hours’, and would have to move the boat in a strong current once the area by the crane was accessible – to be prepared we were advised to move to a dock upstream of the crane, so we’d not have to fight the current later. This dock however was in shallow water, and would dry out completely at high tide. It was difficult with the language barrier to get a good understanding of what was happening, but eventually he reassured us it was fine; the bottom was like ‘dentifrice’ (toothpaste). He was great about telling us where to put our fenders and lines to take the pressure as Footprint leaned in against the dock on the falling tide, and left us to it.

Suddenly we were frantic with work, preparing the mast for unstepping, filling water and fuel tanks, adding the finishing touches to our mast support system, and Maryanne ran into town to get French SIM cards for our mobile phones, and a few other odds. Very busy!

As the water drained out from under Footprint and (it turned out) the spot we’d occupied the night before (we hadn’t felt a thing, but you could clearly see where our hulls had previously settled in the mud). On the return from our foray for fuel, we stopped the car to chat with 4 people who Alain clearly knew. He explained to them that I was the ‘American from the Catamaran’ and they each made a point to shake my hand (through the window and past Alain) warmly with smiling faces. Alain dismissed all gratitude for his kindness ‘This is normal for Pauillac’.

As the tide eventually rose, Footprint floated off the mud with a giant burp and it was time to remove the mast. After all the preparation, the actual event was over quickly; the mast lifted, the supports raised, and the mast lowered upon them. Alain, in his helpfulness, kept ‘correcting’ my knots and almost anything else I did. Maryanne was amused and I was trying not to be annoyed at such a nice guy. He asked where we were going next and when we planned to leave. When we told him he began another round of cheek puffing and insisting “c’est une probleme”. I had wanted to leave with the favorable current to get as far up the river as I could, and this required leaving at 3am (dark). Alain seemed to be convinced that nobody could safely navigate the river in the dark and was concerned about our plan. He also told us that the lock keepers were on strike (so French) and that the canals would be closed, so what was the hurry? This was followed by a flurry of phone calls to conclude the strike was now over (big relief).

While I finished the last of the lashing down of our now horizontal mast, Maryanne spent an hour being advised when to leave, where to go next, and how to get there. I truly appreciated all the help at Pauillac marina (even if I ignored much of the advice).

Once the mast-unstepping was complete, and we moved to yet another berth (freshly dredged, no chance of grounding at low tide) to wait for the next low tide and be off. Until then we had expected it would be necessary to leave at high tide slack and wait on a mooring until low tide slack water. Being at a dock meant we had some spare time to explore the town. 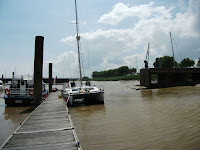 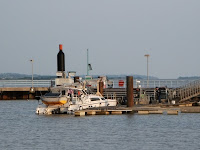 Footprint waits on the mud for mast Unstepping, and once complete, for the morning tide to leave - note the giant bottle of wine that marks the entrance to the Marina - wine country!
Despite us both being exhausted, we were determined to use this extra time to explore and find a place to eat. We eventually found ourselves at a Pizzeria/restaurant where we enjoyed a meal made by folks who clearly cared about food. For the local wine, we shared a white wine called ‘Entre des deux Mers’ (between two seas) – it seemed perfectly fitting. The meal was lovely and we were surrounded by the sounds of he French language all around us, which gradually faded until we found ourselves the only remaining clients! We paid our enormous bill, and staggered home, happy to be in France, and slept like babies until the early morning alarm.
Posted by SV-Footprint at 4:02:00 PM

Welcome back to the Blog, you two! I have missed you and admit I was a bit concerned when no word for so long. No loss of faith, however. I can now breathe OUT.
Congratulations on your safe passage and all the rest. I see you have posted again since I read the first two posts and while I can barely make myself wait, it's too late to start now. Once I read the first word or two, I'm in it for the duration and I promised early sleep tonight for a big auction tomorrow.
Sending big hugs & best wishes. More soon.