Finally, some time to explore 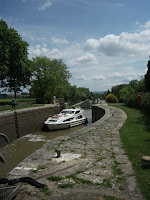 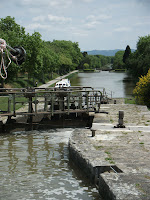 More canal locks from the 1600's
[Kyle]We were ready at 9am, but another boat arrived from the other side of the lock at about the same time, and the lock was setup to receive a rising boat, so we waited until he had locked through.

This section of the canal has locks very close together. You can often see the next one as you exit each lock. It is also very windy with hairpin bends, and lots of opportunities to surprise other boats. We had to do two panic stops to keep from hitting other boats coming the other way through bridges. Why does it always happen at bridges?

We got to one lock just as the lockkeeper’s lunch started. He initially tried to wave us out, but finally conceded to let us have our lunch in the lock. We had it in the cockpit with the waterfall noises of the lock in the background.

At the last lock before Carcasonne, we had to wait for a tour boat packed with passengers to lock up. It was their first one. The lock keeper had a little fun with them and opened all four sluices at once, making a pretty impressive waterfall for the little old ladies in the front seats. As they went to exit, they got turned sideways and dinged their prop on the wall, putting them out of commission. If we wanted to lock down, we would have to find a way to squeeze in with them. It was a very, very tight fit, but Maryanne and I managed to play it cool and make it in without touching anything – like we have a tour boat with us every time. We were glad we got through when we did. That lock was going to be backed up for a while. 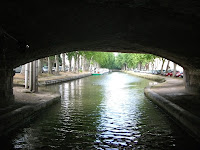 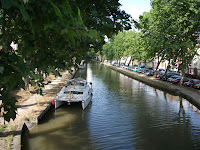 Footprint makes it to Carcassonne
We arrived at Carcasonne, tied up at a reasonably nice spot by the train station and headed out to look for La Cité – the old part of Carcasonne and the largest fortress in Europe. La Cité is so old, in fact, that all of the history starts with it already being here in Roman times 2500 years ago. It has gone through many hands since then and has been modified a few times, the most recent of which was a complete restoration in the 18th century. 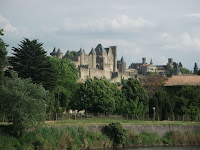 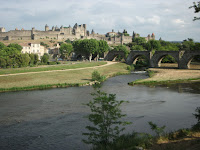 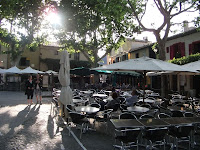 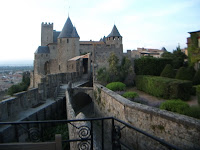 Dinner in a Fairy tale castle - wow!
I would try to describe La Cité, but I can’t. It is right out of a fairy tale, like Brugges or Conwy Castle. Most of the tourists in Carcasonne arrive as day-trippers. By the time we were wandering around La Cité, it was nightfall and there were only a few dozen of us stragglers left. Maryanne wanted to see the gardens at the Hôtel de la Cité, so we strolled through like we were guests and parked ourselves at a bench overlooking the ramparts of the outer wall and watched the sunset. We later found out rates there start at €450/night. We then went to a crêperie and had a delicious dinner of crêpes (mine was smoked salmon, hers was Emmental), a local rosé, ice cream and really strong, tiny coffee.
Posted by SV-Footprint at 3:35:00 PM

I was wondering when you'd get to the food. Mmmmm... sounds like a perfect day.