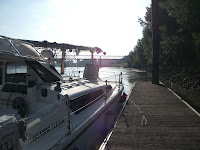 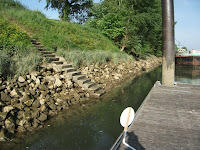 Stuck at the dock, and no way to shore

[Kyle]We were preparing for a possible departure the next morning when Maryanne, who was outside, was hailed from the bank by a couple of gentlemen in cycling gear. They were Bertrand and Derk, two friends out for their daily ride. Having seen our flag they’d decided to see if we were in. Of course we were in, the dock had no gangway to shore. They spoke good English and after half an hour of chit-chat, they asked “what can we do to help you?”. We told them the rumors of the lock keeper strike and asked if they could find out anything on our behalf (we were still waiting for the tide to be in a decent state to move the boat to a shore side dock). They rode up to the office at Castets and came back with the news that there was no strike. The strike was over last week. They just weren’t working when we showed up yesterday. They opined that the lock keepers would use virtually any excuse not to work. Yesterday, the Sun and Moon must have been in the wrong positions.

The Canal de Garonne is the first of the two canals making up the Canaux de Deux Mers, linking the Atlantic with the Mediterranean.

From Bertrand’s kind call, we determined that the first canal lock could not be opened until the tide was at a suitable state – and would be open at 11 exactly for us to enter. Whew! A few forced hours to relax in the good news and we’d be on our way.

It seems we aren’t the only ones who have access to the correct information since as soon as 11 approached so did 2 other boats, one racing to wake us and pass us into the lock, the other gently approaching behind making for a cozy fit. We were handed paperwork to complete, but when we tried to pay for our water ways pass “not me” was all we could get. With no choice we decided to just keep trying to pay until someone accepted our money, and hope we don’t get tossed into some French jail in the meantime.

The boat that rushed to be ahead of us, actually pulled off after the 2nd lock, and the slower sailboat, left after the first (the 2nd lock was too small for all 3 boats). This left us with the canal and each subsequent lock to ourselves. We’d been unable to find any information at the first lock (we’d expected some kind of welcome pack, with instructions and tips) so we were grateful to bumble around and discover how best to do everything without an audience. Apart from a few locks, this canal is entirely automatic. As you approach each lock there is a pole suspended mid water that you are required to grab and twist, and this sets off the process of preparing the lock for us and opening the gates. Once in the lock, and once secure, another button sets off the process of closing the doors, opening the sluices to adjust the water level and eventually opening the doors at the other end to let us be on our way. Electronic eyes sense when we have left and close the doors ready for the next process to begin. Despite being automatic, the power is turned off after hours, so travelling through the locks is restricted to between 9am & 7pm.

We soon felt comfortable managing the locks, and started to feel really on our way at last. We soaked up the agreeable and very French scenery and villages; shuttered houses, potted flowers in the windows and along the fences, and huddled together villages with steepled churches. The very style of the houses and buildings is so very not British, many have plaster falling off revealing inner brickwork, but it all seems to add to the charm. Chateaux sit atop hills and it is all so very charming. Gardens may be rambling or beautifully manicured, but still seem so French, we are loving it. 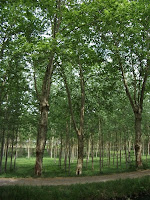 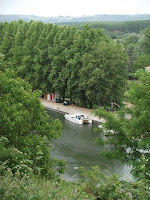 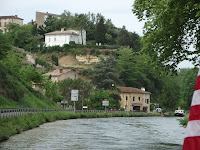 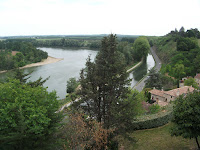 Kyle finds a hill to climb!
We were quite surprised at the number of British that seem to obviously live in the area. At one point we stopped at Meilham to climb a hill and admire the view of the river valley below – only to have our lines collected by Brits running the small harbor and boat rental for the town, other Brits rushed out of their dockside homes to wave and call to us, and plenty of canal boats (definitely non-ocean going vessels) sported British Flags, presumably owned by the ex-pat community.

Before we arrived in France, we’d obviously done our usual level of research and reading; almost every guide we read had warned us that the French don’t smile unless a joke as been cracked, and they perceive someone smiling for any other reason as a little slow, imbecilic perhaps. This is strange to us, as although we know ‘city folk’ don’t expect to be smiled at or even to make eye contact, between boaters it is a normal. At least we’d been warned.

However every French person we encounter walking or cycling along the canal towpath, smiles broadly, waves and says “bonjour”; a nice surprise after all our research. Teenagers are, of course, exempt from smiling or being impressed by anything, practising the disdainful look quite successfully. Often after a jovial group has passed us in the opposite direction they only then notice our flag. A double take and then some very overtly congratulatory cheer often follow this; arms pumped, an extra holler, or something. Kyle loves it! We presume it’s not so much that they are fans of America, but we are sailors who have travelled across the Atlantic, and the French do love their sailors, the best of whom are treated as full scale celebrities, as revered as any Hollywood star!

Eventually we found ourselves after hours unable to proceed through the next lock and tied up at St. Christophe for the night. A tiny village in the middle of nowhere really, but we managed to find a restaurant in an adjacent hamlet (Villeton), and sample yet more wine. There were only two other parties in the restaurant as we arrived, and despite the remoteness of our location, one group of 8 turned out to be Russian, the other a solitary ex-pat Brit with a 24-hour pass from his wife (according to him) to go and play on his boat. As the Brit left, after paying his bill and appearing to speak excellent French, he impressed us by then having a conversation with the Russians (in Russian), and eventually coming over to chat with us (having overheard our English), it was amusing to have him guess Kyle was from Shropshire based on Kyle’s accent. Here was us in the heart of rural France, and finding ourselves surrounded by other tourists and ex-pats. After plenty of wine, and a hearty meal, we retired back to the boat for the evening and slept soundly full of new memories. 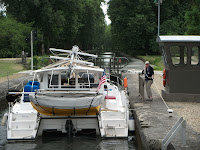 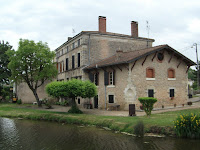 Email ThisBlogThis!Share to TwitterShare to FacebookShare to Pinterest
Labels: Canal