[Kyle]The time had finally come for us to leave Preston. We were mostly finished with all but minor jobs, so the last day didn’t end up being too hectic. We checked the time of high tide and confirmed it with marina staff and the lock/bridge controller. We all agreed to within 20 minutes of each other, we were set to leave at 7pm, just half an hour before high tide, exiting with the flood-waters along the river to the sea.

We exited the first bridge and into the first lock, and were surprised to find ourselves floating in the lock high above the outer basin which showed itself to be full of mud with just a trickle of water for the channel. The tide comes up very fast in Preston, the wind was pushing away the water, and the neap tides are (apparently) notoriously late. The bridge operator verified how much depth we needed to get through and suggested we would need to wait another half an hour within the lock. We tied up near the boat yard crane to wait-out the half-hour, and spent the time chatting with guys hanging out in the yard. Then, without notice, the water dropped rapidly as the lock emptied. We had expected them to let the water come up to meet us, since there wasn’t any, and had cleated our lines for the wait. We had to rush to un-cleat them or leave the boat hanging in mid air as the water dropped away beneath us. A minor jolt of adrenaline! After a few more minutes the lock gates opened and we wound away along the sliver of water between the mud banks in the outer harbor and found ourselves in the river proper. Once there the water level gradually continued to rise and with the help of a good tail wind and increasingly strong ebb current we made good time into the Irish Sea (the dreaded Irish Sea). 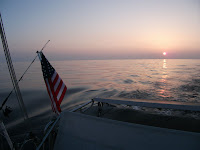 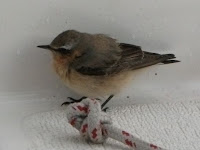 Quite night watches and hitch hikers
The Irish Sea turned out to show its milder side. It took us two tidal cycles to get to Anglesey. The periods of wind against tide were a little sloppy, but not terrifying nor even uncomfortable. Just before rounding Anglesey the wind increased until strong enough that Maryanne had to reduce sail several times (stops her getting lazy). Once around the corner and in the lee of the land things died off and calmed down and pretty much stayed that way two more days for the remaining run down the Welsh and English coasts to Land’s End.

Land's End in the grey distance
We rounded Land’s End just as my watch began at noon. The weather had turned grey and hazy and we were safely far enough from the rocks that it didn’t appear as much else than a grey silhouette against a grey sky. There was just a little contrast with the white tourist shops atop the cliffs. Visually, it was not so dramatic, but it was still a big moment as we slipped past the last few miles of Britain. It brought back memories of our last visit to the area before we went cruising; a windy day several years ago, I was so pleased to find the much calmer conditions for our passage today as Britain slowly faded into the haze behind us.

As we entered the English Channel (at its widest part), the East winds were unobstructed and picked up quite a bit. For the first time in the voyage we had decent winds. It was a bit choppy, but the winds weren’t forward of the beam, so it was just mildly uncomfortable, certainly not unbearable.

Our main concern with the English Channel had been the traffic. The English Channel is the busiest waterway in Europe (being the access route from the Atlantic for most N. European ports and those of much of England). Almost everyone had some alarming story about the continuous stream of ships to weave between on the crossing. In the end we spotted perhaps 4 ships in the Channel, and all well spread apart; During the 2 hours it took us to cross all the marked shipping lanes, we saw no ships all the way from one horizon to the other.

Once on the other side, and coming around the French island of Ouessant (?) our course turned South East into the wind where our ride instantly became more uncomfortable. I was worried this would be our lives for the remainder of the journey, but after a few hours the Bay of Biscay was down to mirror flat seas with barely enough breeze to hold the sails up, much less propel the boat anywhere.

Sitting watches in the early mornings went from being just above freezing (the first across the Irish Sea) to tolerable enough to omit the hat and gloves, and then any physical work at all made the six layer moon suit a little clammy. The daytime temperatures went from cold to sunny shorts weather (eventually).

Our passage across the north side of the Bay of Biscay alternated between slow sailing under all of the sail we could hang and long stretches of motoring. We were visited two or three times by pods of dolphins at dinnertime that seemed to get more playful the further south we sailed. The wind picked up a bit for the last night, before we entered the Gironde, and to avoid arriving on the wrong state of tide we had to reduce sail and force ourselves to go slower. Our goal was to arrive at the narrowest part of the channel/entrance where any current would have the most influence, at slack water. 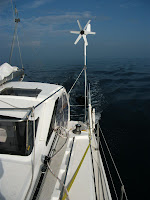 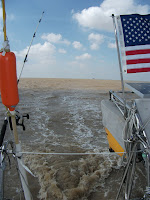 Calm Bay of Biscay, and muddy Gironde
The Gironde is a very large estuary and drains an enormous amount of murky, silt-filled water into the Atlantic. Its effects can be felt many miles out to sea. For almost 100 miles up the river it has the look and consistency of chocolate milk! Several miles before the actual entrance, and hours before the slack water goal, Maryanne (mostly) got to fight the vicious ebb throughout her watch, sailing hard, but making little real progress. I came back on watch after 5 hours rest to find out we had only progressed 3 miles towards shore, all in very short, steep, waves sailing to windward, the exact conditions where the autopilot was useless and hand steering is exhausting but necessary. Eventually the ebb shifted to flood. At times our speed over ground was twice that of our speed through the water, and we managed to cover the 30 miles between the entrance at Royan and the marina at Pauillac in just 2.5 hours. We were going so fast, in fact, that we arrived in Pauillac before slack water and had to wait on a mooring ball (provided for this exact purpose) until it was safe to enter the marina. As slack water approached we entered the marina (built like a fortress against the raging current outside) and were directed by two friendly gentlemen to an empty slip on the fishing boat dock, and kindly provided with the shower code (it was well after closing time); we made the most of the showers as you would expect anyone who had just spent over a week at sea might!
Posted by SV-Footprint at 3:44:00 PM