[Kyle]We found out the next morning that the wifi wasn’t working. After spending a couple of hours troubleshooting the problem on our end, we called BT (British Telecom) and they confirmed the problem was on their end and they would get to it soon, so no internet – again. We are getting so tired of this. 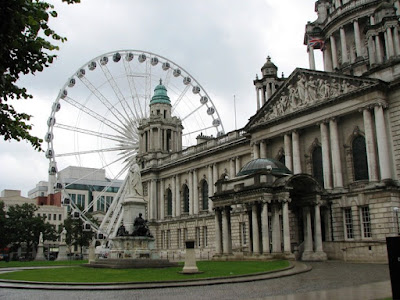 City Hall with the New "Belfast Wheel" in the background - it was way too rainy and overcast to bother paying for the view up top!
Anyway, the three of us took the train into Belfast for a day of proper tourism. By the time we got into the city, it was raining hard. Most of the Irish seemed to think the weather wasn’t too bad because the drops weren’t huge. It was still pretty miserable, though. Most of the things (City Hall, Opera House, Ulster Museum), etc. that we were planning to see were closed for renovation. We popped into the tourist office and eventually decided that a bus tour was the best way to see things without getting too wet. Bus tours are a bit touristy for us but it was actually pretty well done. 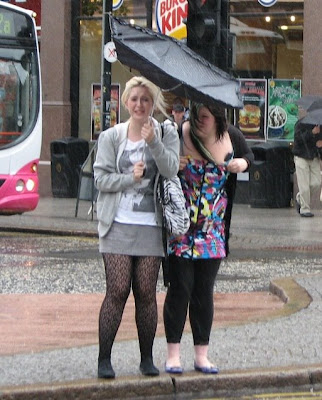 Rain and wind makes for plenty of lost umbrellas - this pair are holding on tight!
Belfast is a really beautiful city. Its violent history adds another layer that makes it even more interesting. We found that, even though the peace is recent, people are pretty open about talking about it. Much of the tour went through areas where the conflict was particularly bad. This made things seem relatively normal but I was surprised to find that Belfast still retained a certain wariness about things flaring up again. The gates of the huge and serpentine Peace Wall separating Catholic and Protestant areas still close at night and Sundays, there are bomb proof walls surrounding most government buildings and, of course, the murals about the conflict are everywhere. 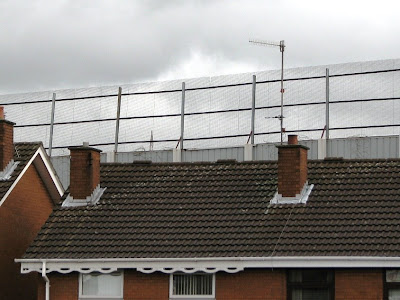 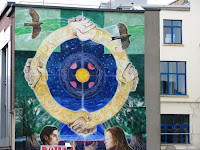 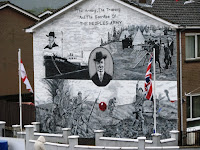 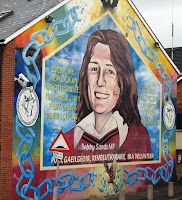 Sample Murals found in Belfast, nearly all are political, and the more modern ones are depicting struggles outside of Northern Ireland
It was still pouring cold rain most of the time once we were done with the tour. We flitted from one place to the next, dodging the worst of it but it really didn’t make standing around looking at buildings seem like that much fun, particularly as it was pretty difficult to keep the camera from getting soaked. We decided that perhaps we were getting it all wrong and ducked into a pub for dinner. 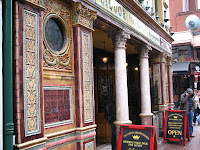 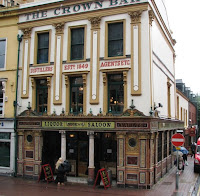 The National Trust's Crown Bar/Pub, amazing glass and tile work, the pictures just don't do it justice, and it is exquisite inside too.
[Maryanne]We had hoped to dine in the Crown Bar/Pub, described by some as "the most beautiful bar in the world" and considered special enough to the only pub owned by the National Trust - unfortunately they were fully booked so we ate across the street and I even got to pull my own pint. If you ever find yourself in Belfast you have to spend some time in the Crown Bar and enjoy a pint or two!

[Kyle]From there, we went to the airport where I fought off my heebie jeebies as Sarah rented a car. She had unfortunately left part of her license back at the boat (British ones are two-parters) so I ended up being the one assigned to drive. I love driving in the UK. Not only is there the great novelty of driving on the wrong side of the road from the wrong side of the car, but the driving is, well, just different. In the U.S., we have a television show about bad drivers. These are usually taken from police car dashboard cams and are mostly cars careening down the wrong side of the road on bare rims before finally disappearing in a cloud of dust as they wipe out on somebody’s lawn. The British version of this show is mostly cctv footage of naughty drivers who have failed to indicate when entering a motorway or who have engaged in the extremely dangerous maneuver of undertaking. (For Americans, undertaking is passing in the slow lane. It is also technically illegal in the States but nobody cares. Brits, you’ve been warned.) The announcer engages in all of this hilarious hutting and tutting about how only the most reckless and immoral people would dare drive in such a manner. Don’t get me wrong, there are genuinely bad drivers over here as well, namely teenagers and middle aged men with overinflated egos, but, on the whole, the drivers over here are much more polite and law abiding. I think the roads are also nicer, particularly with regard to markings and signage. There is also the unmistakable superiority of the roundabout. (Maryanne calls them four-way stops where nobody actually has to stop.) It seems harder to get lost, at least outside of Cork. The only thing that makes me nervous is that the lanes are only about a foot wider than most cars, which is pretty scary on a two lane road with hedges on both sides.

We took the opportunity to head to the grocery store and get some heavy items. To make Maryanne feel more at home, I made her carry the cart to the car while I made sure she didn’t bump into anything. My wife don’t need no stinkin’ wheels.

When we got home we found that BT had still not fixed their wifi. Grrr.
Posted by SV-Footprint at 3:16:00 PM

AAAAACK! That last sentence finished me off into a huge howl. You had better be joking, young man!
Your description of driving backwards brings back the shivers I experienced doing it in Scotland. I'm so used to using extra care when making a left turn here and being pretty sloppy about right turns. Do that there and you're going to have a bad afternoon for certain. As for the roundabouts...I agree they are superior to 4-way stop signs, which Americans never, ever get right anyway. But I'm not sure I think they are superior to the orderliness of stop lights at a busy intersection. And it would certainly be nice if they painted lane lines in them.
So sorry you're having such terrible weather. I'm also amazed to see the barriers between Catholic and Protestant sections of Belfast. It just makes me shake my head in wonder.