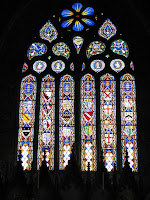 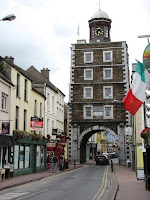 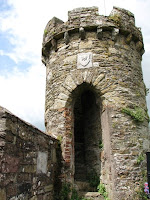 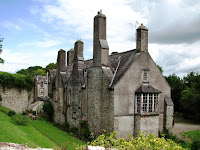 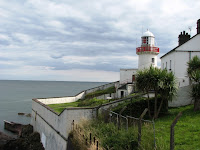 Scenes from Historic Youghal
[Kyle]Day 3 in Youghal (remember, pronounced Yawl) found us rowing ashore again in the same max ebb current but less wind. I was able to just barely make headway against it if I rowed as hard and fast as I could. I could only spare five or ten degrees in the direction of shore. Any more than that and we were losing ground, which I did not want to do as the only landing spot available upstream of the kid’s swimming pool was just abeam Footprint. After about 20 minutes of maniacal rowing, we managed to get within throwing distance of shore under the unflinching gaze of a young guy sitting on the quay with a brooding look on his face. Just as I started my last heroic push to get around the last obstruction, one of our oars broke in two, with the paddle half floating slowly away from us as we both drifted downstream. The guy on the quay seemed satisfied that we were drifting away and that his privacy wouldn’t be disturbed after all. He didn’t know he was looking at Mr & Mrs Preparedness. In one quick, fluid motion, Maryanne reached over the stern, opened a compartment and pulled out our backup emergency oar, which we installed in seconds. After a quick trip to pick up the floating half-oar, I resumed our big push upstream, hindered by the fact that the backup oar has a smaller paddle and a shorter reach. Eventually, after another 5 minutes or so, we fetched up on our original target. The brooding guy , looking dejected, just got up without saying a word and wandered off, leaving us to heave the boat up onto dry land, safe above the high tide line. This time we both had full foul weather gear, including sea boots, and regular walking shoes to change into.

Maryanne’s parents had an eventful morning as well. They ended up stuck in Cork traffic and ended up taking a much longer route, then they got stopped by the police, who were searching everybody looking for a suspect. Once we determined that they would still be a while, Maryanne and I went to the tourist office and decided to take a guided walking tour of Youghal. The two young women at the tourist office had a good laugh when we asked them if there was anywhere we could store our ‘moon suits’ while we went on a guided walking tour of the town. Apparently, that doesn’t happen much. The tour focused primarily on its 12th-16th century architecture, much of it still in use today and in good condition. During that time, Cork harbour was besieged by pirates, so most of the commerce moved to nearby Youghal, which was walled in for protection. The harbour itself, being not much more than the mouth of a big river, offered pirates no places to hide in order to ambush ships.

Once we all did finally meet up, we all went to Fox’s Lane Folk Museum. What a wonderful time we had! The museum is a one man, one room operation on a side road with a very carefully selected collection of everyday household items from the early 19th to the mid 20th centuries. I know this probably doesn’t sound that interesting but the thing that made it so wonderful was the owner, Pat Lynch. He gave us a guided tour, explaining what each item was. He had great enthusiasm. He would open up cabinets and hand things to us to touch and hold, asking us to guess what it was and showing us how to use it. He played us an eighty year old record on a hundred year old Victorola and showed us the first television ever to be sold in Ireland, which had no channel knob as Ireland only had one station. He ended the tour in a re-creation of a traditional Irish kitchen with one whole wall being the hearth and cooking fire. Actually, it was the whole traditional one room Irish house. Actually, it was a reproduction of the house he grew up in. Then, just as we were getting ready to leave, he offered us tea and we all sat at the dinner table talking about what life was like for people before electricity, before plumbing, etc. It was fascinating. Maryanne and I, living a very low consumption lifestyle, found ourselves wishing that a lot of the pre-electric labour saving devices were still available. There were a lot of really cool household devices back then that were operated by hand crank. 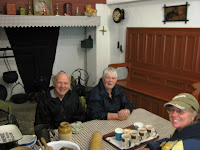 Sitting down for Tea in a 1950's Irish Kitchen - YES, I did say 1950's. Although not everyone lived like this, one room homes, without electricity, were still not uncommon in the countryside
After that, we all drove out to the lighthouse and for a walk on the beach. In one place on the rocks under the lighthouse, a diving board has been installed with a sign that says “use at high tide only”. We then went to a pub and then dinner before getting back to Footprint before the current got too bad again. As soon as we got back, Maryanne had the drill and the rivet gun out and our broken oar was good as new.

[Maryanne]Yet again we find ourselves in a place where we continue with both English and World history lessons, but way more fun than school! Youghal has an amazing history and has been the (temporary) home of great historic figures such as Oliver Cromwell and Sir Walter Raleigh among many others. The river/mooring/anchorage opportunities have been the only negative; we understand there are plans to build some sort of Marina, but the Earl of Devonshire still holds huge sway in the area, and it seems he is not so keen... time will tell.
Posted by SV-Footprint at 9:42:00 PM