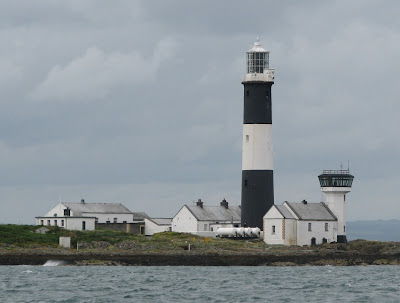 Another Lighthouse.... They are all over the place
[Kyle]Our day to Belfast was horrible. We got up early intending to catch the very beginning of the ebb out of Strangford. This would allow us to make the most of the following current up the coast. As I was doing the pre-departure check on the engine, I found that the hose from the heat exchanger to the overflow reservoir had become brittle and allowed the reservoir to leak out. Fixing it was easy. I just cut off the offending end and reclamped the shorter hose back in place. I started the engine. Maryanne asked me to go forward a bit to relieve some of the tension on the anchor rode. I couldn’t get it into gear. The handle didn’t feel like it was doing anything at all. We opened the transmission cover and discovered that the problem was that the socket on the ball joint that connects the cable to the transmission lever had corroded and was no longer staying stuck on the ball. Being the masters of the jury rig, we figured out how to fix it temporarily using cable ties. Our main problem was that the space is hard to access and so it took a while to get everything right with only one hand available. Now we had stuff to fix in Belfast.

We ended up finally getting underway just as the maximum ebb current approached. I was a bit concerned about this because the wind was forecast to be onshore against the ebb although not that strong at only 12 knots. We went zinging past Strangford Town at eleven knots. The water was turbulent in spots but it was manageable. Further ahead, I could see a small area of what appeared to be 3 or 4 foot chop at the entrance. The wind increased to about 25 knots true (we were seeing 37 with our forward motion). I briefly considered turning back but we would have been barely able to make headway against the ebb and the current was still increasing. The chop was now looking like four or five feet. I knew it would be uncomfortable but figured we could get through it. As we approached the waves, Footprint was sucked toward them like entering a rapid on a river. Just then, I realized that I had made a terrible mistake. The waves were only four or five feet but what I couldn’t see from a distance was that they were separated by four or five foot holes only about a boat length apart, making the faces near-vertical. Footprint would drop into a hole just as the next wave curled over her. The motion was extremely violent. All I could see in any direction was walls of water right next to the boat. Every time we came off a wave, we would slam to a complete stop making the rudders practically useless. The only way I had of turning the boat was by changing the direction of engine thrust with the drive leg. Even then, it was very difficult to keep the boat straight. I was terrified of getting beam to the waves and being flipped over. I doubted we would even be able to successfully swim in this. I knew we couldn’t turn back. I desperately wanted to go sideways to get out of the current but I didn’t dare risk a turn. We had no choice but to ride it out to sea until it dissipated.

The next few minutes were the most frightening I have ever had on a boat; worse than 20 foot seas in the middle of the Atlantic, worse than seeing a ship come out of the fog right at us in New York Harbor, worse than getting knocked down in a monohull and seeing the mast hit the water. I am NEVER, EVER doing that again! A few miles out, the seas calmed a little and we were able to turn sideways and get out of the current. Within seconds, we were in a long 2 foot swell and everything was calm. It took me about a half an hour to stop shaking, though. 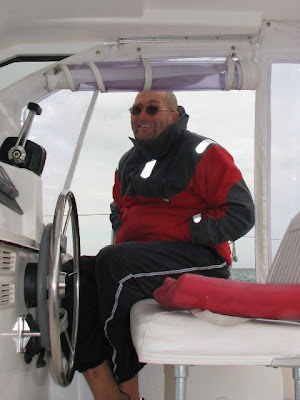 Another Cold Irish Passage
It rained all the way up and it was so cold. I know Mark Twain said the coldest winter he ever saw was a Summer in San Francisco. Well, I’ve lived in San Francisco over the summer. It was very cold but San Francisco has nothing on Northern Ireland for cold summers. As we rounded the corner into Belfast Lough, we turned into the wind and the wind chill got worse. Maryanne had a laugh when I asked for a cup of hot tea. I finally get it! Why would anybody in this climate want cold tea. It’s too cold, man! Iced tea when it’s only 60F sounds like the worst idea in the world, but hot tea in a mug you can wrap your cold fingers around is just lovely!

We got to our anchorage in Ballyholme Bay, by Bangor, just outside Belfast. I was a bit concerned because there were no other boats anchored there. I figured it may because the holding was bad or something but the anchor stuck first time and held fast. In spite of the fact that it was now blowing near 30 knots, we got a front row seat as the local kids had their day of dinghy practice. The poor kids were capsizing almost constantly. There was always one or two capsized at the same time. We saw one dinghy capsize directly in front of another. The second kid capsized trying to avoid the first but managed to jump onto the first boat and keep from getting wet. Pretty slick move.
Posted by SV-Footprint at 2:34:00 PM

Wow. What a story. And what a passage this turned out to be! See? I knew I was worrying about you for some reason--just didn't know the specifics. You are a magnificent sailor. Anyone with less sense and experience would have capsized in that sea. You talk about your experience at the helm. What was Maryanne doing while all this was happening? You just never know when the danger will arise, do you?
First off, what is a Lough? Second, why are you now writing in British English (favour?) and third, oh, I forgot what third was. I'm getting old, you know.
What are your plans now? Will you stay there for a while? Will you have a decent mooring where you can get ashore without having to brave such seas in Pudgy? Yikes. Showers? Shopping? Repairs? You know, the usual.
Again, I'm very happy to hear from you and hope you are able to maintain a wifi signal up north. Sending much love.

First of all a Lough (pronounced 'lock') is just like a Loch in Scotland. That is, a saltwater lake connected to the sea via a small channel (called a Kyle in Scotland) San Francisco Bay would probably qualify if it were here. As to the British English, Maryanne, The computer guru, changed the MS Word settings so now if I write favor, it automatically throws in the extra 'u'. I've stopped fighting it - Kyle

Cold tea on a cold day is actually the second worst idea in the world. The first is entering a crazy-strong current with 4-5 ft waves in between which are 4-5 ft holes. So there, now you know - good thing we're friends, eh? And for once (mark the calendar!) I see the good in Americanizing something. Why would you take a perfectly good word like "favor" and add yet another letter to it when it makes no difference in the pronunciation or meaning? Harumph! Seriously, I am also WAY impressed with your sailing skills - and very relieved it all turned out okay. WHEW!