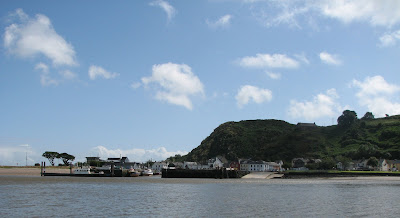 Quaint Hamlets along the River Suir (on route to Waterford)
[Kyle]We never did manage to go ashore in Dungarvan. It rained in sheets thrown by the cold, gusty wind all day. Rowing ashore did not have any appeal. It would have just been a repeat of our miserable day in Kinsale. Instead, we stayed in and ate hot soup and read books. Occasionally, I would look out the window and exclaim, “Yuck!” just in case Maryanne was wondering what my opinion of the weather was.

By the next morning, however, there was actual blue sky with actual sunshine. Unbelievable! The wind had calmed down somewhat, too, from upper 30s to mid teens it was even in the right direction for a nice fast trip. We both thought briefly about taking a quick trip ashore so that at least we could see the town but the forecast for favourable wind wasn’t supposed to last more than a day and Waterford was pretty far. Also, Brian would need his mooring back, so in the end, we decided to go.

We were running through the departure checklist and had just hoisted the dinghy when I felt this terrible stabbing twinge of pain in my back. Suddenly, I couldn’t support my weight but I also couldn’t bend as necessary to fall down so I just screamed. Maryanne rushed out and gradually lowered me to the deck. From there, I managed to crawl into the cabin on all fours and get into the settee but not without more screaming. Damn! I wasn’t even doing anything. I was done hoisting the dinghy and was just standing there when it happened. I hadn’t thrown my back out in almost two years.

Because of all of the above considerations (mostly we were on a mooring ball the owner was expecting to use that day), we still decided to leave. I helped Maryanne steer out of the anchorage since sitting wasn’t so bad if I leaned on something. Once we got out to sea, she pretty much ordered me to go lie down until she needed me. As the boat rocked on the waves, I could occasionally see the cliffs in the distance. Everything looked really pretty. Why did this have to happen on such a nice day?

As we approached Waterford, we found that our intended anchorage, which was around a bend from the main town, had no access to shore and was very steep to. We couldn’t get in shallow enough water without being right on the shore. I decided to head for the town and see if we couldn’t scrounge up something there. When we got there, we found all the water was way too deep or too close to something scary. The few marinas were all full and besides, they had security gates but no offices. Maryanne managed to call one of the numbers and they gave us some instructions that sounded like: “Get a slip from the box by the gate, take it to the hotel. They’ll give you a receipt that you can take to the post office. They’ll exchange it for a key that opens up a mailbox where you can get directions for finding out the gate combination, but first, call this guy.”

She called the guy, but he doesn’t answer on Sundays, so never mind. We headed back to our old spot and found a place away from the main anchorage over a sand bar. It took poor Maryanne two tries before it set. I had been sitting at the helm since the first pass through the anchorage and I was getting to where I couldn’t even sit up straight enough to see over the instruments. As soon as we were sure the anchor was set, Maryanne ordered me back in the boat. The poor thing had to do everything herself but, as always, she didn’t complain and was more worried about me.

Our next day near but not too near Waterford ended up being another howling, rainy gale that made the prospect of rowing out into it particularly unappealing, particularly with my sore back, so we had yet another day in wondering if we were ever going to be able to get out and see Ireland or if it was just going to be a series of rainy places where we see livestock flying by out the windows. We did get to see some deer grazing on the shore just before sunset. Later on, they were gone. I can only assume the wind got them. 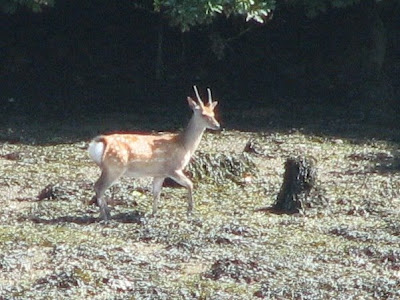 So sorry to hear about your back problems, Kyle. I haven't had one of those awful, stabbing pain things in years, thank heavens. It's truly awful. As for those flying deer--with a couple of good Irish ales, that would seem perfectly normal.

Kyle:
You should see a Physician a.s.a.p.
Sounds like it could be Pneumonia or Pleursy. Don't mess around with it, these bacteria grow quickly. I hope you are totally well soon so you and Maryanne can enjoy some of those great "Irish Pints" again.
Bob

kyle, sorry to hear about your back going out! i hope it's much improved. and if it's not, maybe you should indeed see a doctor. can't believe the weather's not cooperating - or wasn't. it's almost august, for goodness sake! here it's been 90 every day but feels hotter. oomph! [that's my sound for "geez, it's hot!"]