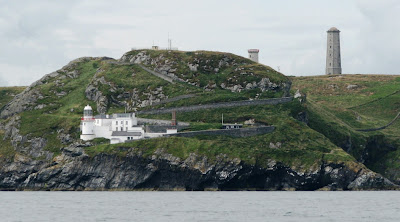 Lighthouses En Route
[Kyle]After 2 days anchored outside Waterford, the wind died down gradually during the evening to more sensible levels. After another night’s sleep, my back was much better and the forecast was looking really good so we decided to head out. I was able to get most of the departure checklist done. Some of the stuff still made me a little sore but I managed.

We had a fast trip down the long river in a following current. The sky only had a few puffy cumulus and the air was clear. The green, hilly, English style countryside slid by. Further down the river as it widened at its mouth, the wind and current were opposing one another and it made for a pretty choppy upwind pound before we were finally able to get out into the sea and turn across it, picking up speed and smoothing out our ride.

We made it to Carnsore Point (the big bend in Ireland’s coastline that separates the South coast from the East coast) just before sunset. From this point on, our cruise transitioned from an eastbound one in the Celtic Sea to a northbound one in the Irish Sea. This made our course more downwind and I was able to unfurl the screacher for the first time in a long time. The current was at its peak going the other way and we found ourselves surfing gently down the faces of big, standing waves while making almost no progress at all. A few hours later, the current reversed again, carrying us along with the wind in flat seas as we zipped over the bottom.

As the night wore on, since it was clear, it became very cold and eventually, by 4 a.m., I had to give up and give it over to Maryanne.

[Maryanne]Kyle was determined, I think, that he would sail the full way, I kept napping and offering to take over, and eventually he gave in and went off for a sleep. I got to see the sun rise, and a bank of wind generators in the twilight, but we were a too far off the coast to see much detail of land. There was little wind, and what was there was variable so I spent most of the time tweaking sails, gybing, etc . With light winds and a strong current against me, I sometimes found myself going backwards over the ground, even though I was moving through the water – I saw a lot of that off shore wind farm! I think in 6 hours of sailing I made around 5nm over the ground.

[Kyle] Eventually, the current reversed again and released us from its grasp and we finally made it to the little man-made harbour at Wicklow. The harbour consists of an inner harbour on the Leitrim River, with an outer harbour protected by breakwaters that is diamond shaped, with the opening on the top. The harbour is around ¼ miles each side. Once inside the entrance, we found the western half of the harbour was filled with moorings and the eastern half was filled with kids in dinghies racing around a triangular course. The thought briefly occurred to me to make a dash for the middle and just put the anchor there, allowing us to act as one of the race buoys and giving us a good view of the races. Since that was extremely cheeky and we would be blocking the inner harbour entrance, we thought it better if we didn’t. We were going to be here for a couple of days and it would not do us well to irritate the whole town right away. Best to let them become irritated after spending some time with us. It did seem just possible to drop our anchor just outside of the line of the moored boats, but it looked tight. As we were hovering around planning and measuring our spot, one of the inflatables tending to the racers came over. Maryanne asked if he know if any of the moorings were available for use by transients. He said probably not and that most transients tie up to the East breakwater. He then pointed over to a huge, jagged, slimy concrete wall with gnashing teeth. Ooh, uh, perhaps we’ll just keep measuring. A different inflatable came by and repeated the same advice. Okay, well, we’ll go over and look at it and see if we can’t make something work. On closer inspection, it didn’t look so bad. It was actually nice and smooth, not jagged and the teeth, well, I don’t know what happened to the teeth. Below the tide line, there was actually so much seaweed that it probably would have kept us from scraping concrete, even without fenders. The main problem was that the tie-down rings were way up on the top of the wall, inaccessible from the boat without climbing the ladder to the top. This required that Footprint be held exactly in place with the engine while the lines were passed up, etc.

Shortly thereafter, a man just climbed aboard our boat and introduced himself as the Harbour Master. He was very friendly and helpful and said we were free to tie up to the wall. The charge was 14 Euros per day. That’s not too bad for the convenience of not having to row the dinghy in, particularly as it was forecast to blow hard for the next couple of days; and we get the use of the showers at the sailing club.

A little while later, we were boarded by another man (don’t you people knock?) who introduced himself as the commodore of the sailing club and repeated the invite to use the showers and the bar.

{Maryanne, it is generally considered highly inappropriate to climb aboard a boat without an express permission from the captain. Most visitors will call from the dock, "Ahoy" or some such thing, or will knock on the hull and await a response... So far here, that rule does not seem to apply. Kind of like having a visitor to the house, say collecting for some charity, just walking into your kitchen and not first knocking on your door - very odd. Of course everyone was really nice once aboard, so we can't complain too much, but we are just a little uncomfortable what the "rules" are here, and who we may find aboard next!}

As the tide started to come up, just like in Youghal, all the town kids came out to jump off the wall into the water. Between them and the others in the dinghies and rowboats, we felt conspicuous as if we had accidentally moored in the middle of a public swimming pool. Everybody was very nice, though, being both very helpful with advice on the town as well as being interested in our travels. 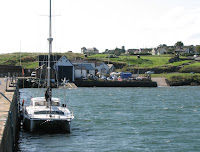 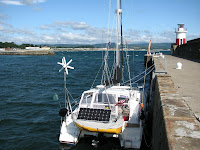 Footprint on the Outer Harbour Wall at Wicklow
We are pleased that even if it blows like crazy here, Footprint is relatively secure and we will still be able to climb the ladder and head into town.
Posted by SV-Footprint at 9:30:00 AM

Are there, at least, some bumpers or something to keep Footprint from smashing into that wall? I hope Kyle's back has, indeed, fixed itself, as that ladder climb could be a little precarious otherwise, especially at low tide.
Very strange that anyone would simply board the boat without permission. It's not like you can lock up, so you rely on the courtesy of strangers for your privacy.

How long will you be there and where to next? I've missed hearing from you.

all I can say is ditto to what Carla has said. Guessed you were sailing or no connection