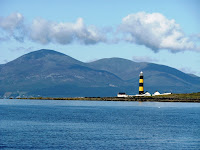 Kyle loved this "Bumble Bee" lighthouse we found while heading North
[Kyle]We had to get underway very early in order to get the currents in our favour and arrive at our next stop before nightfall. At 2 a.m., I got up and poked my head outside to find a clear, starry sky. What the hell!? I think I’ve finally been in Ireland long enough to resent good weather. Nice in the middle of the night does hardly anybody any good. I shot the sky a disapproving look and prepared the boat for departure.

Once underway, we shot out of the Lough with help from the current. The wind picked up and I raised the sails in a fifteen knot tailwind. Within seconds, the wind completely died and we ended up with a four knot headwind, which was really just the four knot current pushing us through still air. I shot the sky another one of my looks and restarted the engine. He wind never really came back again after that. We had one two hour period when we just couldn’t take the motor anymore and we just crept along under sail anyway, enjoying the peace and quiet. We had a current to worry about so we eventually had to give up and start the engine again. The sea was a flat mirror. We slid along under a beautiful, clear, sunny sky. The visibility was fabulous. On one side, the Mourne Mountains slowly slid aft, on the other, we could see all the way to the Isle of Man, 30 miles away.

The high mountains gave way to low, rolling fields and we turned into Strangford Lough. Strangford Lough is another large estuary (about 5x15 miles) dotted with islands that is all fed through a gap of about 1 mile at the town of Strangford. Because of this, peak currents are around 7 knots. We had about four going with us as we zinged by the town being gently shoved this way and that by eddies. We entered the main part of the Lough, passed the village of Killyleagh and headed down the channel towards the Quoile Yacht Club. Before we got that far, though, we pulled off and dropped anchor in a secluded spot between Salt, Gore’s and Rat Islands. Rat Island is uninhabited (at least by people), Salt and Gore’s islands are both populated with dairy cattle living a nice, easy, pastoral life.

Since we left so early, we got in early. With the day still being so bright and beautiful, I decided to get the dinghy out and have a sail around the islands. It was blowing pretty hard and it was a little cold so Maryanne decided the first trip out would be a solo reconnaissance one. I put a reef in the sail, making it about the size of a dinner table and took off. What a nice day! The scenery was just lovely. Rolling, tree lined pastures with the steep Mourne Mountains behind. One of the smaller islands was just covered with nesting sea birds who squawked nervously as I approached in the little, scary, orange thing. I came around a corner and got a similar reaction from a small herd of cows. Somebody way up there had a Viking longboat on a mooring. I sailed back past Footprint and headed up the Lough to see the yacht club. By then, many of the boats were returning from their day and I got lots of friendly smiles as we passed each other. I made it to the edge of the Yacht Club mooring field. Going further would have involved tacking up through the mooring field, which I wasn’t up to. Clouds were rolling in and it was getting colder. The wind decreased enough for me to shake the reef out for the quick downwind trip back to Footprint. I got there just as it started raining. I think I’m starting to figure out Irish weather. Blue sky means it’s about to rain, gray sky means it is raining. 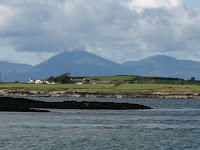 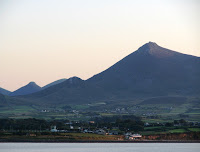 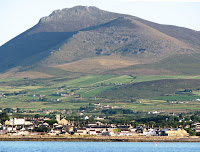 Eagle Mountain and other scenes
It rained all night in sheets. The rigging vibrated all night in the howling wind. Both of us kept getting up in the night worrying that we’d dragged. We never have but we frequently worry about it.

The morning was the same. We couldn’t even see the islands through the rain-streaked windows. Yuck! Nice day for a book. At 10 o’clock, it just cleared up – just like that. Huh! Okay, it was still pretty windy but otherwise nice. Maryanne rowed into the shallows looking for mussels and found none so we decided to take the dinghy out for a sail. Even with the sail reefed, it became obvious as soon as we left Footprint that this was a bad idea. Going downwind, the little Pudgy was completely overpowered and kept trying to broach (for you lubbers, it’s pretty much a wipe out). Turning upwind toward the yacht club, we ended up pounding into chop and taking cold wave after cold wave over the side. Not fun. We endured this for maybe ten minutes before deciding it wasn’t worth it and high-tailing it back to Footprint. By the time we got there, I was sitting in a three inch puddle of water. I stood up and it all ran down my legs. Eeewww! It never did end up doing anything but rain the rest of the day. Fleh. 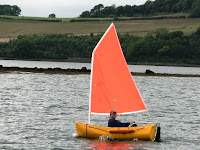 Kyle in the Dinghy, and this tree shows the predominant WINDY conditions in Ireland
Posted by SV-Footprint at 1:54:00 PM

Hmmm...the weather in the Bahamas was more favorable for sailing. And hiking. And enjoying the day. And doing chores. Well, you know.

So THIS is what all the talk about terrible weather in Ireland and Scotland is all about. It sure makes for some beautiful country though. Gotta give them that.

So glad to hear from you and know you're okay, if chilled and wet most of the time.

I love that photo of the tree! SO COOL! Good eye, whoever (whomever?) took that one. Better luck next time finding mussels!