Sightseeing with the Parents 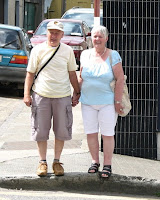 [Kyle] The next day, the four of us (Me, Maryanne, and her parents) got an early start for a drive into Cork to see the sights. Since Maryanne's parents had rented a car, we got a little sidetracked in the morning trying to get a few things that Maryanne and I would have had a hard time getting on the bus. Not much in the way of sights, but it was so nice to clear off almost everything on our list.

After that, we headed into Cork, which, we found out, is the only way you can go in Cork (i.e hard to get out again). Cork town centre has a genuine Hotel California road system. The roads take you where they want you to go, not where you want to go. We would see some promising thing and decide to stop only to be herded completely out of the area, then re-herded back in half an hour later with virtually no idea what happened in between. I was in the front passenger seat with a map on my lap but it was practically useless. Every time I would say to go left at the next road, we would get there to find no left turn was allowed, or it was a one way street the wrong way or it was closed for some other reason. Okay then, we’ll just go straight and turn at the next left. Nope. Can’t do it! Everybody has to go right. Damn! That’s where we just came from! In this way, we spent a diverting afternoon learning the Cork road system by going completely the opposite direction from the way we wished on every single road in Cork. 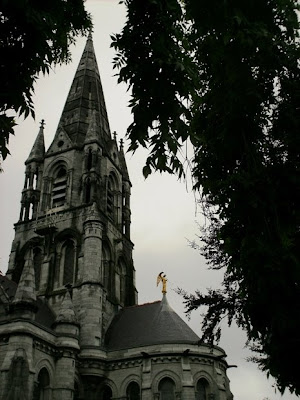 Eventually, through much determination, we did actually manage to find and, the second time around, successfully stop at St Finbarre’s Cathedral. Wow! The place is absolutely enormous and every single corner of it is decorated with the most beautiful art of the most painstaking detail. It was absolutely stunning.

Afterwards, we finally figured out how to get out of Cork and returned to Footprint for a late dinner.

Our next day in Crosshaven was a work day. Maryanne’s parents came over for breakfast and were kind enough to help us get the boat back into shape. After a few days of stalling, Ronnie finally got the rail done. Even though he had the weld done right away on the first day, it turned out that he didn’t want to give it back to us until he polished it. It looks like a completely new rail. The weld is completely invisible. The work is beautiful. Same with our helm seat track, same with everything else we gave him. Maryanne’s Dad helped me get the rail back on and retune the rig afterwards. Maryanne and her Mom did most of the inside list. Afterwards, we all went to the Royal Cork and Munster Yacht Club for dinner. The RC&MYC is the oldest Yacht Club in the world and they are very gracious to visiting yachties, even those who are not actually staying in the club’s marina, such as us. No blue blazer required. We got a lovely meal for about half of what it costs everywhere else in the area all aglow in the knowledge that Footprint was almost back in good order.

Our next day, since we had a car, we all agreed to do some driving to some of the places we had been before that Maryanne’s parents hadn’t seen while taking the inland route that Maryanne and I haven’t seen. What a beautiful part of the country this is. Everything is so picturesque. Winding roads bound by hedges and stone walls meander up and down green hills, occasionally plunging through a tunnel of green in thick woods. 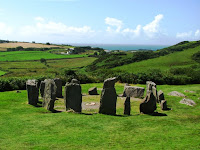 Drombeg Standing Stones, similar structures are all over Ireland

Our first stop was the standing stones at Drombeg, a prehistoric stone circle and cooking site. From there we went into Skibbereen and toured the Famine Museum. Skibbereen was the epicentre of the horrible potato famine in the mid 19th century. Next was lunch at our old hangout, Bushe’s Bar in Baltimore, followed by a walk around the beacon at the head of Baltimore Harbour, this time in better weather. After that, we headed back, but not without having a quick look at Lough Hyne, Ireland’s first marine sanctuary and Charles’s Fort in Kinsale. We finished the night with fish and chips from the place in Crosshaven that’s always packed, always a good sign. 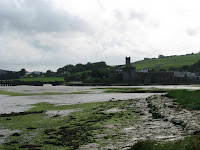 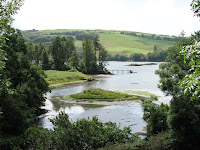 Scenes From the County Cork Countryside
Posted by SV-Footprint at 7:49:00 PM