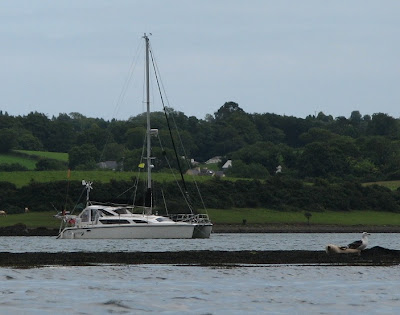 Footprint Shares the Lough with the Seals
[Kyle]By the next morning, the wind had dropped and there was a blue sky. We decided to make the best of it before it rained. We put a reef in the sail for the Pudgy and had another go at making it to the yacht club. No sooner had we left Footprint than it became apparent that we didn’t have enough sail. We shook out the reef and tacked our way up the harbour. The Quoile Yacht Club is right below a big dam that acts as the head of navigation. I was determined to get at least within sight of the dam. While we were reefing just off Rat Island, we saw and heard several seals making a huge racket. Closer examination revealed that they had several adorable furry baby seals on the beach. They are just too cute.

Seals in the Lough
The wind picked up and then it started to rain. Between the rain and the spray from the chop, we were getting hit with a lot of cold water. We were at about the point where we turned back the day before. This time, we were determined not to turn back and let Ireland beat us again, so we kept going. The rain shower turned out to only be a few minutes and soon enough, we were back in sunshine and light breezes, drying off. We made it to the edge of the yacht club and began tacking our way through. Because there is an outlet for the dam on the other side, there is pretty much a continuous current to fight. We spent an entertaining couple of hours inching our way along. A few times, it took us five or six tacks to get past a particular boat. This gave us a great sense of triumph when we finally bumped past their mooring ball with the stern of the Pudgy. We eventually got within sight of the dam and I changed my goal to landing on the yacht club’s dock so we could stretch our legs and find their restrooms. We were being a bit naughty since this was technically illegal. We hadn’t cleared Customs and Immigration for Northern Ireland yet. It is unnecessary for Maryanne to bother within the EU, but I need to. We’re supposed to clear in before making landfall. It’s generally okay to anchor as long as you don’t go ashore, which, oops, we just did. We made it quick.

One note about the Quoile Yacht Club: Near the restrooms are their recycling bins, which were piled high with bottles for fine wine and expensive spirits, not a cheap beer can in sight. These people’s parties are the ones to which you want to get invited.

Back at the dinghy, we cast off and had a brief conversation with a couple on a nearby boat about where we’d been, etc. Just as we stated sailing off, the guy tossed us a couple of candy bars for the sail back. Maryanne made two astounding one-armed catches, leaning backwards out of the dinghy like a pro outfielder. I was sure we were going to have to chase them down and fish them out but no need.

We were amazed at how fast we blazed through the mooring field on the way out with both wind and current in our favour. Within ten minutes, we were passing Footprint for the trip up a different channel to see the cows and the Viking boat. The tide was by now almost all the way up and I got it into my head that we just may be able to circumnavigate Gore’s Island and come out again at the yacht club. As we were tacking up the estuary toward the gap, it started to rain again. This time it didn’t look like it was going to let up soon. I could tell Maryanne was keen to just give up, but she indulged me and we finally made it through with the rudder kicked up in inches of water. The sun finally came out again and we had yet another fast downwind sail home, but not before we also ticked off a circumnavigation of little Rat Island. 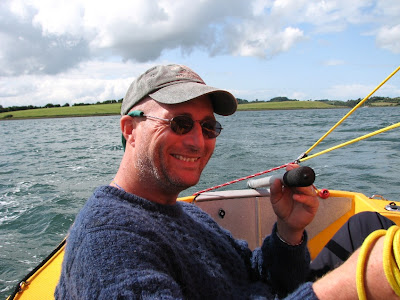 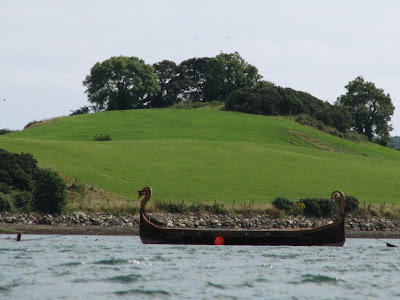 I can't believe the little rain showers you keep experiencing - no one ever told me Ireland was the Florida of the North Atlantic! Maryanne, congrats on catching those candy bars. One doesn't mess about when there's chocolate involved, but still - one-armed? Risking an unintentional swim? Very nice! :)