[Kyle]The weather the morning of our next leg to Dungarvan dawned clear and bright. Ah, yes, another pretty summer day. By the time the coffee was made, it was getting gray and cold, by the time we pulled up the anchor, it had started to rain. The anchor! Oh, yes. Maryanne was up at the bow cranking away as she usually does but, eventually, it became too difficult for her and she asked to switch. We had a wind against current situation and I was reluctant to put the boat into gear as our trip line float was lingering dangerously next to our prop. As I got cranking, it became apparent that I was fighting more than the current. We seemed to be stuck on something. We only had about 20’ of chain retrieved and it was already going straight down. Not a huge deal, sometimes we get wrapped around a clump of weed or something. Every now and then I would strain and crank and something would give and I’d get a little slack. Eventually, after cranking right at the limit of my strength, I got the anchor just below the bow roller. It and the rest of our chain were attached with a Gordian knot to a fairly large outboard motor. 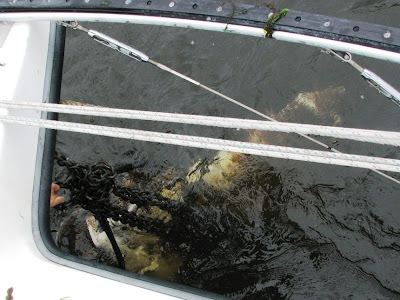 Since we were effectively adrift, we took Footprint into deeper water in order to work the problem out away from the moored boats. We managed to cut away and unthread the trip line, but there was no way that I could see dealing with the rest of it without either getting it in the dinghy, which I was not about to do, or heaving the whole mass onto the deck, which I could not figure out how to do. I cannot begin to describe how exhausting untying a giant knot made out of chain with an anchor on the end while hanging half off the boat with Maryanne sitting on my legs acting as counterweight can be. My arms felt like they were made out of rubber for an hour afterwards. Yeah, goodbye and good riddance to Youghal harbor.

Once we finally got out to sea, we were running late from the big anchor kerfuffle but, fortunately, we had a nice strong wind from behind and were soon back on schedule to get to Dungarvan during the higher half of the tide cycle. The weather continued to deteriorate until we were eventually sailing through a featureless, cold gray drizzle. Even though we were less than a mile from the coast for most of the way, it would only reveal itself as a barely perceptible change in the level of gray in that direction from time to time. It felt like the Pacific Northwest in the winter. It never broke 60 degrees Fahrenheit. Where was summer? Yuck!

When we reached Dungarvan, we found our way up the winding channel by spotting the buoys on radar before we could see them. The shallow harbour is bisected by a long sand spit that all of the water must squeeze through during tidal changes. This has scoured out the only part of the harbour in which it is deep enough to anchor. The area is a roiling collection of eddies, whirlpools and standing waves. We were expecting that it may be necessary to take the ground at low tide but very carefully managed to pick out a spot that was barely deep enough to stay afloat at low tide and had adequate swinging room. We backed down on the anchor and it seemed set well, but when I went forward to help Maryanne, we started dragging. Damn!

Just then we heard a guy yelling at us from shore. He must’ve had lungs like Pavarotti to be able to be heard over both the wind and the engine half a mile away. After we got the anchor back aboard, we carefully eased up to shore to find out what he wanted. He directed us to his mooring, which he said he wouldn’t need for a couple of days. After we got settled in, I rowed over to thank him and get more information about the mooring. His name was Brian. He was friendly although in a low key, Maine kind of way. He said the other end was a big concrete block and that we should stay afloat if we didn’t draw too much, all in an accent that was so thick I could barely understand him. Thanks Brian.

Later that night, I got up as low tide approached and found only us and two other boats afloat, the rest canted over like discarded toys in a sandbox. Brian’s mooring was on a slope. The outgoing current had pulled us over deep water for low tide and shallow water for high tide, leaving us no less than 3’ the whole time.
The following morning, we were all raring to get up and take an excursion ashore to see Dungarvan until it started raining again – really hard. It’s amazing how that will kill your motivation to go for a stroll. Maybe later.
Posted by SV-Footprint at 11:09:00 PM