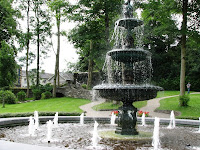 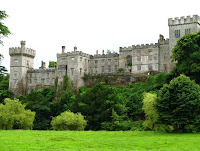 Lismore Public gardens, and the Castle

[Kyle]On Maryanne’s parents’ last day with us, we all met up in the morning and headed to the pretty little village of Lismore. Lismore was founded in 636 A.D. by St Carthage as a monastic university and has understandably had a lot of history in the 1473 years since. We started the day with a film and a tour around the Heritage Center. If you go, skip the film, unless you need a nap. From there, we took a walk to see both St Carthage’s cathedrals (Church of Ireland and Catholic). After that, we drove up to a winding, tree covered road to a trail leading up to a folly whose name I can’t remember. The story was that the intent was to build the biggest castle around but they never got beyond the gates, which are pretty impressive themselves. They are buried in the woods along a path that looked to me almost exactly like a Giant Redwood forest, minus the big trees. The weather was beautiful and for the first time in Ireland, I wore shorts all day, happy to see that summer had finally arrived. 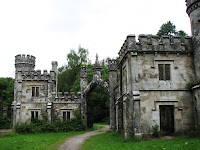 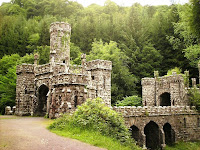 Folly Gatehouse and Bridgehouse, the owners were out of money before main house never got built


On the way back, we found a place to pull off to view the very impressive Lismore Castle. It is not possible to go inside unless you have the 4,000 Euro fee and book in advance as it is currently the private residence of the 12th Duke of Devonshire. Previously, it had had been the residence of Walter Raleigh and several generations of Boyle’s, including Robert Boyle, the Father of modern chemistry. Standing on cliffs above the Blackwater River, it is a very impressive piece of architecture. Maryanne’s father managed to find a path that ran right down to the opposite bank, where we could crane our necks and marvel at its size.

After that, we had a quick cup of tea at a little café run by a woman who was having a good time ribbing us about staying after closing time and telling us that the cake we ordered is, of course, delicious, but not as nice as the one’s we passed up.

Maryanne’s parents had to catch their plane back to England so we got back to Youghal for an early dinner and then bid farewell to them. The current was still running strong for another hour or so we used the time to make yet another vain attempt to find an internet connection before finally giving up and heading to the store for some groceries to get us through the next few days.
Posted by SV-Footprint at 10:56:00 PM

We in the US have no concept of such an ancient history. We are awed by things dating to the 1880s! We would never expect a structure built 1400 years ago to be standing at all. We have no concept of the history that predates our own very late arrival on our continent. It's even worse in the western part of the US, which was not settled by Europeans until gold was found in California in the late 1840s. The east coast folks have a longer history to work with and when I was in Boston, I was taken with how much rich history was there--dating to the 1600s! By comparison, the Irish and English (and for that matter, all other) civilization histories are so much more vibrant and colorful. Pirates, you say? What's changed, really?

Very true. Makes me think of that Eddie Izzard stand-up comedy show in which he made fun of Americans being so impressed w/ our architectural history: " 'We've redecorated this building to how it looked OVER 50 YEARS AGO!' And people in the audience gasped and said,'No, surely not, no. No one was alive then!' "