Automatons and Medieval Towns on the Canal

[Kyle]While I prepared Footprint for departure, Maryanne headed off to the Boulangerie for our breakfast. Baked goods in France are all amazing, but they go rock-hard after a few hours so they have to be bought right out of the oven. Maryanne had a good back and forth with the gentleman about what she wanted and “what do you call these”. At the end, he asked her if she was going to be there Saturday. She said no, she was leaving right away, so he popped two extra rolls in the bag. It wasn’t until she was retelling the story to me that we realized it was Saturday already.

At the first lock, we encountered a rental boat with a group of people from Vancouver, Washington – right across the Columbia River from Footprint’s hailing port of Portland, Oregon. We did the secret handshake then asked them about their trip. They had just picked up the boat from Carcasonne late the night before. This was their first lock – ever. Then we showed up and they had to try to squeeze in with a huge catamaran. To their credit, I would rate their performance as better than the rentals coming back from their last day. We were both going down, so the two boats just sat quietly next to each other as the water drained. After the first lock, the guy at the helm asked us to exit first. We did and were tucked way in the front when they arrived at the next lock so they’d have plenty of room. They did fine, but I could tell they were really worried about hitting us. Maryanne and I weren’t too concerned. The guy at the helm seemed to know what he was doing. He took it nice and slow instead of trying to save a bad situation with gobs of power, making it worse. We had lots of people to fend and those rental boats are fendered up like a fat kid at the beach with an inner tube around his waist.

At lock #3, a triple, they were right on our tail when we came around the corner and spotted the lock. We entered, looked back and they were gone. We waited a bit, but they never showed. I think the thought of three locks in a row with another boat got to them.

We passed through Trèbes, a really nice looking village and home to a Le Boat rental base. We considered tying up for a little while until we saw the show. One Le Boat backed out in front of us so we had to duck in behind another private boat moored at the quay to keep from getting hit. A Le Boat coming the other way tried to turn into its slip and ended up bouncing its way along the moored boats on the other side of the canal. It really ploughed into the boat we had hid behind. A small, tanned old man emerged and smiled at us. He seemed to take it pretty well. He had three fenders protecting him from the wall and about twenty on the Le Boat side.

We continued to the next lock where we got to see more of the same thing while we waited for our turn. Things would go wrong, the person at the helm would panic, turn the helm the wrong way and gun it, then randomly bounce around in the lock until one of the bounces happened to end up at the open gate. For some, this even seemed to be the technique. We were grateful to lock through alone.

Going through alone actually increases one’s chances of being alone at the next lock as it allows the others in front to get further ahead and the boats behind fall further behind. That and weather that became increasingly miserable kept the rest of the locks clear for us for the day. The day had started out gray and a little windy. We had hoped it would burn off later, but it only got worse as the day wore on, becoming very windy and raining occasionally. Maryanne noted that we were already getting soft. In Preston, this would pass for nice weather, since it was still 23C (73F). 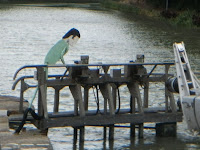 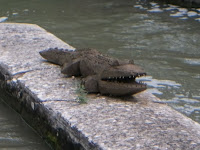 A lock-keeper with skill and a sense of humour
A couple of locks later, we came across a fun lockkeeper. He was a metal sculptor – mostly kinetic - who had turned the entire lock area into a gallery of whimsy. There were figures with propane tank heads, a naked woman riding a bicycle, a pig roasting a human on a spit and many others. Almost everything had been turned into something else. His control box was a stick-figure man with a door at the back of the head to push buttons. My personal favourite was a full sized lockkeeper on the most upstream gate. When the motor operated sluice #1, the metal man would crank way the way lockkeepers used to. When we left, a wooden alligator greeted us on the weir wall. Now there’s a guy who does more with his down time than think up more ways to make a dour face.

On the last lock of the day, we bought cherries grown in the lock house garden and ate them on the way to our stop for the night; the forgotten little village of Argens-Minervois.

We had originally planned to stop for fuel since we had not taken on any since Agen and we were getting a bit low. Argens-Minervois was supposed to be one of the few places on the canal that actually ran fuel to the dock, sparing us of the need to lug jerry cans to the nearest service station. Like most of the others, this turned out to be outdated information. There was also no service station for miles. Oh, well.

As we approached the town, we saw that it was built on a hill with some sort of grand structure at the top. It seemed an agreeable enough place, so we decided to pull in for the night.

The place has almost nothing in the way of docking facilities. There is no wall, no quay, and no harbor. The only accommodation is a few bollards driven into the ground on the bank for attaching lines. We were a little concerned with this. We had so far seen lots of moorings on grassy banks that on closer inspection sat over a rocky bottom.

We lifted the rudder nearest the bank and approached very slowly. We heard no crunch as we contacted the long grass growing out of soft mud. It was a bit of a jump but otherwise seemed like a pretty secure spot.

We had a walk around the pretty town. The grand structure on the hill turned out to be just a big decaying apartment building (centuries old, not recent). The town was a strange mix. A lot of the buildings had portions that were decaying to the point that the wind was going right through crumbling walls and grass was growing inside. These were interspersed with newly renovated sections. There were several residences that were just small apartments tucked into the back corner of otherwise entirely abandoned buildings. 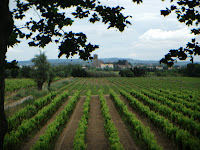 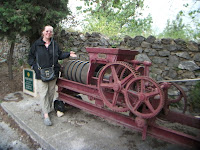 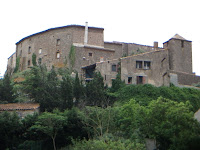 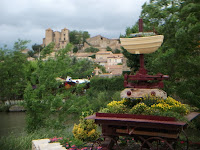 Exploring small villages
The town itself had little visible means of support. There were a couple of shops selling wine a couple of days a week, but otherwise no commerce. I couldn’t help but wonder who the people were that owned these places.

The wind picked up even further until it was blowing like crazy all night. Our mooring seemed nice and secure though. We didn’t budge at all, but in the morning we were all covered in seed.
Posted by SV-Footprint at 3:55:00 PM

Hi U 2
Thanks for making my mouth water with all this talk of cherries they are my absolute favorite fruit but cant buy toooooooooooo many as cant stop eating till they have all gone just waiting for mine to ripen in the garden.

I hope you do know your writing is vibrant and entertaining as ever. Isn't it strange you would almost literally run into Washington folks?