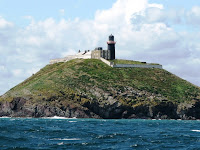 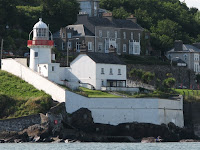 [Kyle]It was time for us to get moving again, so we left the helpful guys at Salve with some of their favourite beer as a thanks and headed up the coast to Youghal (pronounced ’yawl’). The weather forecast was supposed to be out of the west at about 16 knots. We saw that and all the way up to 30. The same thing happened the day before. It seems that Irish forecasts have to be doubled. On the way out of Crosshaven, we saw the RNLI (Royal National Lifeboat Institute) rushing out to save a kid in a dinghy who had blown a spinnaker to shreds and then capsized in the main harbour. They were still out in it in dinghies. Most of the rest of the fleet sailed home under full sail like it was just a regular day in the harbour. After all, it was only blowing Irish 15! On the way out, we spotted the poor kid’s rudder and reported the obstruction to the Coast Guard, who later recovered it.

Once in the open sea, our Irish 15 gave us a very fast trip. We spent a significant amount of time in the 8 – 10 knot range and even saw 13.3 – a new record for us. Just before we put in yet another reef to counter the ever increasing wind, we were visited by a couple of huge dolphins! This pair really seemed to enjoy our speed and kept crossing our bows at right angles before veering away for another pass. Our hulls are 10 feet apart and these dolphins were at least a couple of feet longer than that. They got bored and left when we turned into the wind and virtually stopped in order to reef the mainsail and left us to ourselves for the rest of the trip to Youghal.

When we reached the harbour at Youghal, we found it to be pretty but poorly protected. We made sure the anchor was well set and then spent the night bouncing around as if we were out at sea anyway.
Posted by SV-Footprint at 11:47:00 PM

By Irish standards, it's only going to be 57 degrees today. I love this.